As the Islamic state draws closer to the Turkish border and Ankara struggles to overcome its differences with the Iraqi administration, Turkey may be left to face the jihadist threat on its own. 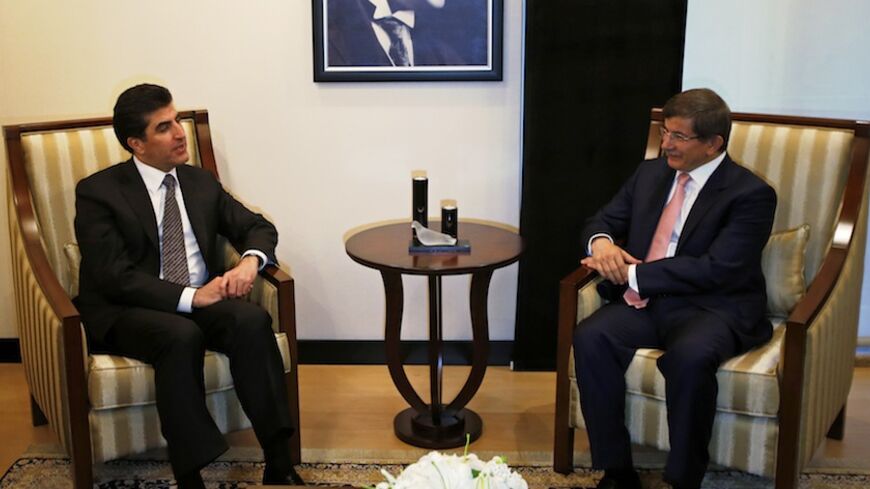 Turkey appears to be in a quandary, not knowing how to position itself against the Islamic State (IS) as the jihadist group expands into the Kurdish regions of Iraq and Syria and draws closer to the Turkish border. Ankara, which has been keeping public attention focused on Gaza for weeks, is trying to downplay the growing regional threat from IS, but is clearly concerned.

Meanwhile, Prime Minister Recep Tayyip Erdogan — who is expected to be elected president on Aug. 10 — remains reluctant to call the group a terrorist organization, ostensibly in an effort not to endanger the lives of 49 Turks taken hostage in Mosul. The government has imposed a news blackout over the hostage crisis, claiming it is necessary to facilitate ongoing negotiations for the release of the hostages. Opposition parties claim, however, that the move is only intended to prevent embarrassing reporting that will undermine Erdogan’s campaign for the presidency.

Tellingly, Erdogan has made Gaza a centerpiece of his presidential campaign, but has hardly mentioned IS and the barbarity this group is perpetrating against Muslims and others in Iraq and Syria. Asked in June why he refused to refer to it as a terrorist group, Erdogan retorted that no one should expect him to provoke IS.

“They expect us to make provocative statements regarding this group. They expect us to approach the fire with a stoker in hand,” he told officials from his Justice and Development Party, reminding them of the large number of Turkish hostages in the hands of IS.

Foreign Minister Ahmet Davutoglu is also ambivalent over IS. Back in January, he accused the group of being in league with Syrian President Bashar al-Assad. He said, “[IS] emerged on the scene and started fighting opposition forces just when the opposition in northern Syria grew strong. There is a partnership behind the curtains between them and the [Syrian] regime. The regime points at these groups and says, ‘There is terrorism,’ thus legitimizing itself.”

During an interview with NTV news this week, however, Davutoglu was more circumspect, refusing to refer to IS as a terrorist group. He defined it instead as “a radical organization with a terrorist-like structure.”

Davutoglu also appeared to reject press reports indicating that Ankara is deeply concerned about IS advances. During his NTV interview, he downplayed the three-hour meeting he held at the Foreign Ministry this week with the defense minister, the commander of the Land Forces, the commander of the gendarmerie and the head of the Turkish intelligence agency.

The media reported that the meeting had been hastily convened to consider the latest advances by IS in Iraqi Kurdistan against Makhmour and the Yazidi Kurdish city of Sinjar, bringing IS nearer to the regional Kurdish capital of Erbil.

IS reportedly slaughtered scores of men in Sinjar and enslaved 500 women as concubines, while thousands of residents fled to the mountains where they are caught now without food and water.

Meanwhile, the residents of Makhmour — where there is a refugee camp under UNHCR control that houses family members of Kurdistan Workers Party (PKK) militants that fled Turkey in the 1990s — have also started fleeing as IS pushes on while local armed men and PKK fighters try to ward them off.

These developments — when combined with the fighting between IS and Kurdish forces in northern Syria near the Turkish border — are all highly significant for Turkey and the potential consequences are grave. Davutoglu, however, is giving the impression that his government is not overly concerned.

In his NTV interview, he said the high-level meeting in his office was not something that he felt should be on the agenda of the press. “We did not consider this to be an extraordinary meeting but one required for coordination between various state agencies. It should not be thought that Turkey is holding these meetings with an extraordinary agenda.”

But with Kurdish refugees knocking on Turkey’s doors, Turkish jets scrambled with orders to shoot if Turkish territory is violated after IS attacked Makhmour, with Iraqi jets bombing IS targets around Makhmour and with talk of the United States arming Iraqi Kurds against IS, one wonders what Davutoglu’s idea of an “extraordinary agenda” is.

Despite the efforts to minimize these developments, his government is clearly deeply concerned about where all this is going. Judging by the rumor mill in Ankara, there are also differences between the military and the government as to how this situation should be addressed. According to one claim circulating in diplomatic circles, the military is demanding a more forceful stand against IS.

These developments do not just pose a security threat to Turkey. The fear is that Turkey’s estimated $12 billion in annual exports to Iraq and Iraqi Kurdistan will also be impaired as IS takes hold of the region. Official figures already indicate a sharp decline in the trade figures with Iraq. Turkey is also dependent on oil from Iraq and Iraqi Kurdistan and there is concern that supplies could also be disrupted

What is clear, however, is that Ankara cannot afford to disregard the significance of what is transpiring on its borders and will soon be forced to address the issue with some hard decisions.

Complicating things further for Ankara, its currently strained ties with most of the region's governments do not provide the necessary environment to work on coordinated strategies against IS. Noah Bonsey, the Syria expert at the Brussels-based International Crisis Group, also pointed to this in remarks to the New York Times this week.

“With Iran and Saudi Arabia locked in a proxy war in Syria, Saudi Arabia competing with Qatar and Turkey for influence throughout the region and Kurds — themselves hardly united — leaning ever further toward independence, it is not realistic to expect a coherent strategy for confronting [IS] to emerge from the region,” he said.

Unless this situation changes, with Turkey overcoming its differences with the Iraqi administration to start with, Ankara will most likely be left trying to face the threat from IS on its own. There is also the possibility that Turkey may decide to back the Iraqi Kurdish peshmerga against IS.

The Turkish military is unlikely, however, to be too happy about this, and will also be against any deals that appear to land it in the same camp as the PKK against IS. The rational course for Ankara to pursue, given this confusing situation, is to overcome its quandaries vis-à-vis IS, and start using its potential for regional leadership to forge a coherent strategy with regional governments.

The Erdogan government’s policy toward the region, especially since the Arab Spring, has been based on emotions driven by religious and sectarian considerations. But this has not enhanced Turkey’s security or advanced its regional interests. It has done just the opposite. Minimizing the gravity of the problems emerging on its borders and hoping that they will somehow disappear is not the way to go.