Kasim Kara, the Turkmen Front spokesman in Iraq, says Turkey did not open its borders to the Turkmens while allowing entry to more than 1.5 million Syrians. 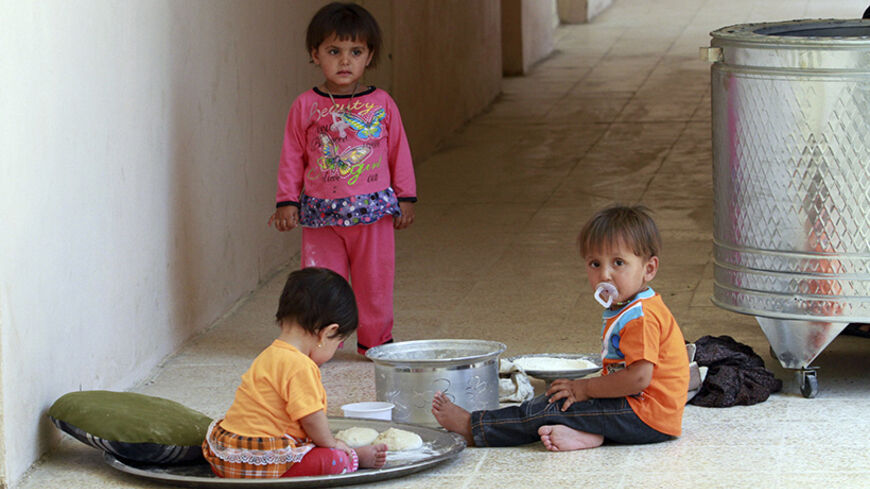 Shiite Turkmen children, whose families fled the violence in Mosul, play at a school in the town of Nahrawan, east of Baghdad, July 16, 2014. - REUTERS/Mahmoud Raouf Mahmoud

After 2005, when sectarian strife started to slowly rip apart Iraq, the plight of Turkmens has been the most ignored tragedy — even in Turkey. With the Islamic State (IS) taking control of Mosul and Tal Afar early June, Turkmens are once again left without support to face their own destiny.

It was Turkey’s presidential hopeful Ekmeleddin Ihsanoglu who reminded the Turks on July 21 that as they cry their hearts out for the Palestinians in the Gaza Strip, they should also remember their ethnic brothers, the Turkmens, in Iraq. “Iraqi Turkmen leaders came to visit me [July 20], and told me such horrifying stories. They talked about a Turkmen girl of 13 [or] 14 years old being gang-raped [by IS members] while being filmed, and then she was hung to death from an electric pole. They told me stories about the kind of violence the Turkmens face,” Ihsanoglu said. “They are there with no water or food. They have no place to sleep. Yet, there is no word here in Turkey about them, and we keep talking only about Gaza.”

Sinan Ogan, a Nationalist Action Party (MHP) deputy for Igdir, also brought up this issue during his address in parliament on July 22. Questioning why the ruling Justice and Development Party (AKP) has grown so indifferent to the Turkmens’ suffering in Iraq, Ogan asked, “Did we not have the will or the money to accept 5,000-10,000 Turkmens? Why does this government find it so difficult to take care of our own brothers?” he said, deliberately raising the question why the government has not opened the borders to the Turkmens.

Kasim Kara, a local spokesman for the Iraqi Turkmen Front, echoed the same sentiment during a telephone interview with Al-Monitor from Sincar, Iraq, roughly 50 kilometers (31 miles) from the Turkish border. “We requested entry to Turkey through Turkey’s consulate in Erbil. We also talked to Ersat Hurmuzlu, President [Abdullah] Gul’s [chief Middle East] adviser. But they never came back to us with either a positive or a negative answer.” He added, “I can go to Turkey anytime I want, but many here don’t have their proper paperwork. Turkey did not allow them in, and we wonder here, while suffering under the desert temperatures with no water or food, how Turkey can accept all the Syrians and not us; how Turkey can cry for Palestinians in Gaza, or [those in] Rabia in Egypt, but not us. Turkey left us alone here.” Kara also stressed that they are not really that far away from the border.

Kara told Al-Monitor that there are roughly 300,000 Turkmens in Tal Afar and many escaped the town out of fear of IS militants. “We witnessed some brutal scenes. They killed our people, our women and children. They burned our sacred places, razed them — and Turkey remained silent all along,” he said. “Some Turkmens follow the Shiite faith. IS militants tortured them. They brutally killed Bushra Haydar to scare the rest. She was a Turkmen Shiite, and her husband was a Turkmen Sunni. She was five months pregnant. They took her up to the castle, tortured her and then shot four bullets into her stomach and one bullet to her forehead.”

Ogan told Al-Monitor that he has been in close contact with the Turkmens and was trying to bring their situation to the government’s attention, so that the state could rally its resources to help them — to no avail thus far. “These rapes are taking place in a systematic way, and it is such a culture that you won’t hear them talk about it, because most of the time they occur before the eyes of the father or the husband. It is the worst demeaning thing for the families that they can’t protect their women or do something for them. They’re also torturing their souls, and we’re just watching it from afar — indifferently.”

A Turkmen family, which asked to remain anonymous, told Al-Monitor that they buried their 13-year-old daughter after she was gang-raped by IS militants. “She was bleeding so badly,” the girl's mother told Al-Monitor. “They first beat my husband to death. We were terrorized, and then they took her in the middle of the night. I wish they would have taken me, so that she could have stayed alive.” She added, “We don't want to come to the media’s attention like this, but we don’t understand where Turkey, our fatherland, is!”

Kara also repeatedly told Al-Monitor that the aid provided through Kizilay, Turkey’s Red Crescent, is not enough. “We’re betrayed by the Kurds. They don’t allow us into Erbil. We don’t have any sense of safety here,” Kara said. “It’s difficult to go south toward Najaf, Basra [and other places]. But those who make it tell us that they are at least welcomed there. Shiites do take care of each other. But we have no one.”

Ihsanoglu’s statements did not have much impact and didn't appear on the Turkish dailies' front pages, and the government has not made any comment about the Turkmens. It is indeed all about the Palestinians, or rather a sea of anger targeting Israel.

“We remain hopeful that Turkey will revise its policy, and do what is necessary to bring us to safety,” Kara said.