No winners in Israel-Hamas cease-fire

To justify the deaths and devastation in Gaza, Hamas political bureau chief Khaled Meshaal needed an achievement, and so did Prime Minister Benjamin Netanyahu, whose approval ratings continue to drop from one week to the next. 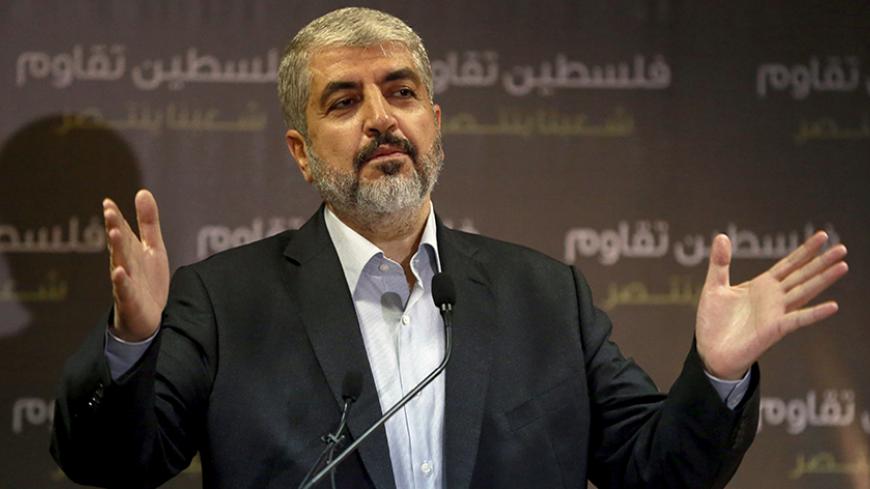 Israeli Prime Minister Benjamin Netanyahu and Hamas’ political bureau chief Khaled Meshaal have been going at it for 17 years. The saga began during Netanyahu’s first term (1996-99), as a young Israeli prime minister. After a long quiet spell, Hamas started rearing its head, conducting suicide bombings in Israel proper. Netanyahu looked for ways to carry out a “low signature” strike at the organization. Being his usual self, Netanyahu abhorred head-on confrontations, real wars or forceful moves that might have rattled his seat. He preferred to operate under the radar. Back then, Meshaal was relatively anonymous — a senior Hamas militant residing in Jordan, thought by the Israeli Shin Bet and Mossad to be one of the “heads of the snake.”

Netanyahu instructed the Mossad to assassinate Meshaal “quietly.” The operation took place in September 1997, but Meshaal survived the assassination attempt. His standing skyrocketed, making him the most prominent leader in the organization under Hamas founder Sheikh Ahmed Yassin. When the latter was assassinated by Israel in 2004, Meshaal became the landlord. It is uncertain whether that would have been the case had it not been for this earlier assassination attempt.

Meshaal survived thanks to an operational blunder by Kidon (“bayonet”) — the Mossad’s hit-man unit. The poison that should have been sprayed on the back of his neck hit his ear. The entire incident, designed to have been well-orchestrated and to have taken place quietly, turned into a brawl. A manhunt ensued, which subsequently led to the arrest of two of the would-be assassins, who identified themselves as Canadians. The failure turned into a resounding diplomatic defense farce, forcing Netanyahu to urgently dispatch Mossad Director Danny Yatom to Jordan and provide the Jordanians with the antidote to neutralize the effect of the poison, which would have killed Meshaal within a few hours.

That’s exactly what happened. Danny Yatom hurriedly flew to Jordan and Meshaal’s life was spared. To get its agents back, Israel was forced to release Yassin, the leader of Hamas, from prison. Netanyahu came out of this affair with a fact-finding commission, humiliation and quite a headache. Since then, Meshaal has continued to soar in the skies of the Middle East as the organization’s chief facilitator. And he remains so to date. Netanyahu’s headache turned into a migraine.

Until the morning of Aug. 26, while I was writing this article, everyone awaited Meshaal’s decision. One of the more resounding intelligence failures during Operation Protective Edge was the erroneous assessment regarding the dominant hierarchy in Hamas and Meshaal’s near-absolute power, as well as the organization’s strategic situation prior to the operation, whose mindset was “sink or swim.”

As for Meshaal himself, he was caught in a typical Catch-22. Having climbed a high horse, he brought about unprecedented devastation to Gaza as well as some 2,000 fatalities. On top of that, he also lost two of his greatest strategic assets — the tunnels and the rockets — and led to the extreme isolation of Hamas in the Arab world. To justify all this, he needed his people to see he had something to show for it.

The problem is that there were two powerful elements resolved to prevent him from making any significant gains — to wit, Israel and Egypt.

Israel, for obvious reasons, has its citizens to defend. And what about Egypt? The same applies. Hamas has long been declared the enemy of the Egyptian people. Its president, Gen. Abdel Fattah al-Sisi, has vowed revenge on Hamas. The Egyptians are having a great time with the current turn of events, having no intention of handing Meshaal a ladder to climb down or giving him a hand. So Meshaal continued to vacillate, had second thoughts and hunkered down. But the more he continued, the worse the situation for his people in Gaza became.

Netanyahu, too, has his share of problems. The Israeli school year is slated to begin next week, on Sept. 1. The residents of the Gaza periphery have by and large evacuated their homes. The tourist industry is paralyzed and the economy is taking a beating. Additionally, the prime minister’s approval ratings are plummeting.

So which of the two — Netanyahu or Meshaal — will reach his breaking point first? That question was on everybody's mind in recent days. In the end, they both reached that point almost at the same time. The one who held it up was Meshaal, but in the end, he, too, consented. He didn't really have much choice. Thus, Palestinian Authority President Mahmoud Abbas announced a cease-fire, to which Hamas gave its support. Israel followed suit immediately.

“Netanyahu has known Meshaal for nearly two decades,” said a senior Israeli diplomatic official, even before the cease-fire. “He has studied him inside out. He knows almost everything there is to know about him. I think he prefers to play against him than against any other reality that will take place once he is gone.”

The source was alluding to reports about deliberations among top Israeli officials whether to instruct the security apparatus to include Meshaal on Israel’s hit list. Certain statements to this effect have already been heard, mainly by Finance Minister Yair Lapid, who also said that Hamas’ political leaders “can be killed,” too.

Some top Israeli defense officials had pushed for Meshaal’s assassination since the start of Operation Protective Edge, arguing that he is the cause of Hamas' extremism. Being the main obstacle to reaching a resolution, he forces his will on Hamas’ military wing as well as the organization’s political leadership in Gaza. Until he is assassinated, there is no possibility of bringing some sort of sanity into the region.

Pitted against them is Netanyahu. He’s already tried to assassinate Meshaal once and barely survived it himself. He will invariably prefer the known bad to the mysterious unknown that follows. Netanyahu is very strong at making statements and threats, but Operation Protective Edge exposed him for all his failings when it comes to taking action, even to those who doubted that.

As noted, on the evening of Aug. 26, the much-hoped for response finally arrived. It is too early to say who wins, who loses and what the strategic repercussions of Operation Protective Edge will be. What is clear, however, is who did pay a price: The Palestinian people, with thousands of fatalities and casualties; the Israeli people, with dozens of dead soldiers; an entire region that was bombed and turned into a semi-deserted frontier; and peace proponents from both sides.

From Netanyahu's standpoint, this is the lesser of two evils. He knows that as soon as the war drums in Gaza quiet down, his personal war of survival will begin.

On Aug. 25, Israel’s Channel 2 reported that the prime minister’s approval ratings plummeted to merely 38%, compared with 82% just a few weeks ago. And he has yet to face the deadly political criticism, which will come mainly from the right wing. So it is not only Meshaal’s fate that will be sealed in the coming weeks, but also Netanyahu’s. These two have not been able to break loose from each other’s stranglehold for 17 years.