Netanyahu under pressure for a large military operation

Prime Minister Benjamin Netanyahu faces demands by his coalition partners for a strong reaction to the Gaza rocket fire, while the international community will surely refrain from backing him on a large-scale military operation. 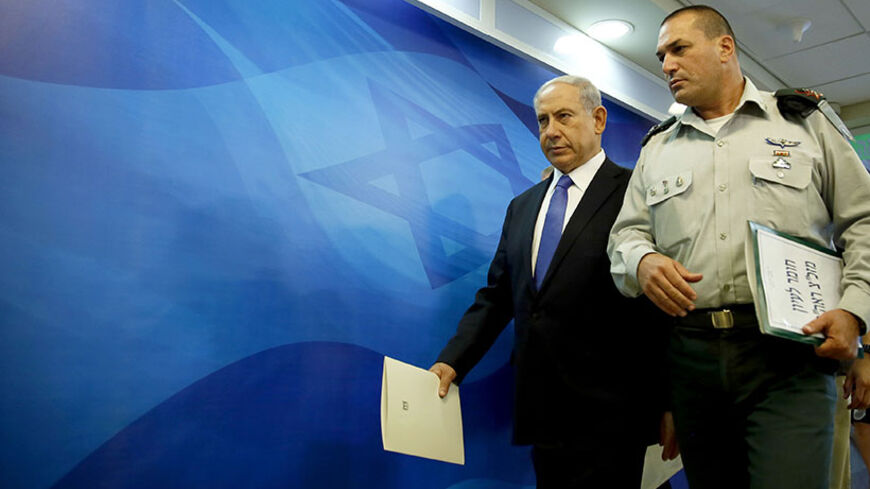 Initiated by Akiva Eldar, our colleague from Al-Monitor, and organized by the Israeli daily Haaretz, the “Israel Conference on Peace” opened the morning of July 8.

In honor of the event, the newspaper published a special column written by US President Barack Obama. “Peace is necessary, just, and possible,” he wrote. “True safety will only come with a comprehensive negotiated settlement,” he asserted. The American president dispatched his Middle East adviser, Phil Gordon, to the Haaretz-sponsored conference.

A few hours earlier, on Monday evening, Saudi Prince Turki al-Faisal also published a column in that paper, in which he asserted that the “Arab Peace Initiative still provides a template for peace.” He called on the Israeli people and their leaders to accept it, to turn the entire region into a blooming garden of cooperation and brotherhood, instead of being a place of wars and hatred.

Having served as his country’s intelligence chief, Turki also served as the Saudi ambassador to some European countries and as the ambassador to the United States, the most prestigious position fathomable in Saudi Arabia. He is said to be the axis linking Saudis and Israelis, having fostered secret ties with his Israeli counterparts over many years.

His column could have very well been written by Shimon Peres, the Israeli president. If the region consisted of only people like him and Peres, peace would have long reigned here.

This was a well-orchestrated peace offensive which could have elevated spirits and boosted morale in what is left of the Israeli and Palestinian peace camps. But as is usually the case, the realities of the Middle East upset the applecart. Representatives from all over the world gathered in a Tel Aviv hotel to talk about peace, while just a few kilometers away — in the cities of Ashdod, Ashkelon, Rehovot and in many other places — preparations were underway for war, which at the exact same time was slowly progressing toward us.

On the night of July 6, seven members of Hamas’ military wing were killed inside an explosive tunnel, which would have allowed them to emerge on the Israeli side of the border, carry out a massive killing terror attack, make an attempt at kidnapping soldiers or civilians and then return to their base in Gaza. Israel’s intelligence corps picked up the trail of this tunnel ahead of time. The Palestinian force that was about to mount the terrorist act blew up inside the tunnel. At the same time, two other Hamas militants were killed during Israeli airstrikes.

Very limited and proportionate, the Israeli activity came about after continual deterioration on the Gaza front. Spearheading the fire this time around, Hamas kept ratcheting up the rocket fire at Israel every hour. Scoffing at the Israeli offers to resume the understandings reached in the aftermath of Operation Pillar of Defense, it also dismissed its statements that “quiet will be met by quiet.” As was observed here last weekend, Hamas disproved all the premises. It decided to double down and put out the fire with a massive explosion, salvaging itself through blood, fire and plumes of smoke.

Convening for four hours on Monday night, the Israeli cabinet listened to assessments of the situation. Prime Minister Benjamin Netanyahu is caught in a classic Catch-22. If he continues to show restraint, he will go on being battered. Hamas will pursue its buildup. The range of the rockets will increase, going up north — all the way to the cities of Herzliyah, Netanya and Hadera. Soon enough, all of Israel will fall within Hamas’ rocket range, only to be held hostage by the caprices of the military wing — Izz ad-Din al-Qassam Brigades — which, with a push of a button, can disrupt the lives of millions of Israelis.

In contrast, if Netanyahu does decide to take action, he will turn the two summer months — the beloved break by Israeli adults and children alike — into a sweaty and bloody nightmare. Tel Aviv will be bombed with rockets. The economy will sustain a heavy blow. Tourists will take off, national morale will plunge and the sense of security will wane. This — it goes without saying — will also put Netanyahu’s own rule at risk. And if there’s one thing that Netanyahu is more afraid of than having state security at risk, it’s having his own rule at risk.

This whole setup is reminiscent of a banking system. The name of the game is international credit. Former Prime Minister Ehud Olmert had unlimited international credit thanks to his generous peace offers and the bona fide protection he earned, having convinced the world that he was a peace-seeking leader. Incidentally, this was all true. Consequently, when he waged war on Lebanon (2006) and then Gaza (2008), the international community did not give him a hard time. And it is for the same reason that when Netanyahu talks about war, the international community immediately closes in on him and will not give him a free hand for very long.

During the discussions with the defense establishment, Netanyahu heard an assessment to the effect that the IDF would need quite some time in order to revert the situation to what it used to be, to wit, the understandings of Operation Pillar of Defense that were hatched out after Netanyahu government’s last operation in Gaza in November 2012. Netanyahu does not have that kind of time — neither from the international community nor from his public.

On the one hand, he is being outflanked by the right. Minister of Economy and Trade Naftali Bennett takes him to task at every possible opportunity, scolding him as someone who does not keep his word and is unable to stop terror from Gaza. On Monday, Foreign Minister Avigdor Liberman disbanded his union with Netanyahu’s Likud Party, demanding also to begin an operation in Gaza fashioned after Operation Defensive Shield.

Bibi (Netanyahu) is rapidly losing his right-wing base, emerging as a hesitant, fearful premier. He is being repeatedly reminded of what he said as chairman of the opposition when Hamas fired rockets at Israeli towns in 2008. He is being reminded of what he promised (“We will topple Hamas' regime of terror”) and what he stated (“The Kadima government stopped the Israel Defense Forces (IDF) in its tracks before completing the task. We will restore security for the residents of Ashkelon, the residents of Ashdod and the residents of Sderot and Beersheba”). Found free of charge on YouTube, his performances have been in high demand lately. In hindsight, they look more like Louis C.K.’s standup routine than statements from a leader.

When the defense establishment meets with the Israeli political echelon, the full complexity of the issue comes to light. Suppose Israel did incur into Gaza, did eradicate terrorism there (the way it did in 2002 during Operation Defensive Shield) and did pull out in the end. Then what? Who will replace Hamas? Based on past experience, things will only get worse. Those who killed Hamas founder Sheikh Ahmed Yassin got Ahmed Jabari, commander of Hamas’ military wing, in his stead. And those who killed Jabari now have to cope with the Salafists, the Resistance Committees and Ansar Bait al-Maqdis in Sinai.

So before launching such an operation, we need to make sure that the reality in the medium and long run would be a better one. Incidentally, it worked out in the West Bank. By mopping up terrorism during Operation Defensive Shield, Israel helped to embolden the Palestinian Authority, which has been fighting terrorism since then (while still continuing, however, to oil and fund the Palestinian incitement machine.) An Israeli incursion of Gaza could turn into a trap as was south Lebanon (where Israel was bogged down for nearly 20 years), or even a kind of Vietnam. On the other hand, there will be no escaping from that eventuality.

There is no sovereign state in the world that would be willing to live for an extended period of time under the immediate and constant threat of terror. Sooner or later, Israel will have to clean up Gaza, with or without Netanyahu. Right now, it seems that it will likely do it without him.