Could the presidential campaign be good for Turkish democracy?

Turkish Prime Minister Recep Tayyip Erdogan’s two main opponents in the presidential elections have shown themselves to be legitimate contenders. 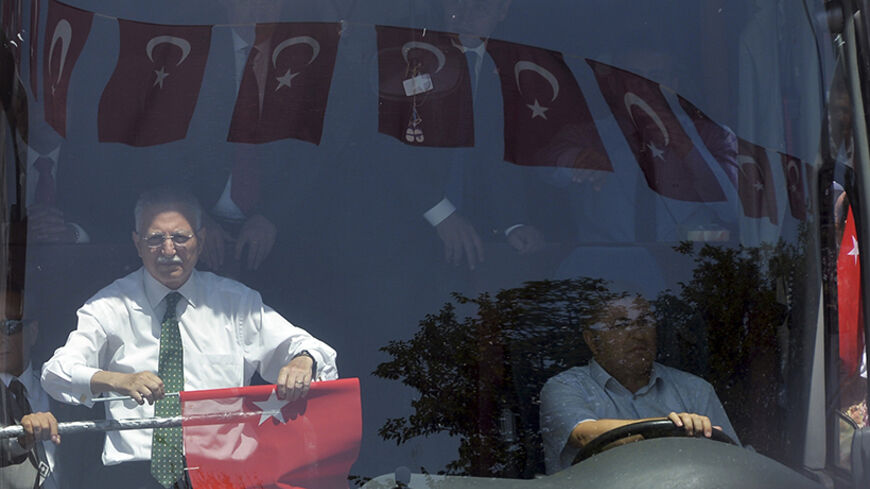 Professor Nilufer Gole is an internationally acclaimed sociologist and one of the world’s leading experts on the challenging issue of “Islam and modernity.” She was recently decorated with France’s highly prestigious Legion d'Honneur award. At the ceremony for the occasion in Paris, her mentor, the great sociologist Alain Touraine, made a memorable speech praising her contribution to contemporary thinking.

The renowned academic of Ecole des Hautes Etudes en Sciences Sociale of Paris is spending her summer vacation in her homeland od Turkey, and at a dinner table a few days ago offered her observations on the upcoming presidential elections. She said, “Let’s see the full half of the glass. Having professor Ekmeleddin Ihsanoglu and Selahattin Demirtas as two contenders against Mr. [Turkish Prime Minister Recep Tayyip] Erdogan, the likeliest winner of the race, is a great gain for Turkey and for the maturity of Turkey’s democracy. We can be much more hopeful for the future of the country than we had been earlier. We have to preserve a certain dose of optimism for the future, despite it has been made bleak by Erdogan's posture.”

The obvious question, naturally, came from me in its simplest form: “Why? What makes you think in this way?”

Gole responded, after a pause, “Ekmeleddin Ihsanoglu is a newcomer into the volatile political arena of Turkey. Despite being a nonpolitical entity, by displaying a suave and a civilized personality, he could present himself as a formidable contender against [Recep] Tayyip Erdogan. This very fact, by itself, speaks to us that a very important segment of the Turkish population is very matured and society, gradually, will be looking beyond what Erdogan symbolizes. The other candidate, a young Kurd, Selahattin Demirtas did not say anything during his campaign that would contradict any liberal and democrat element in this country. When added together, one can be hopeful about Turkey’s future and keep up one's faith of the people of this country.”

With such an assessment coming from Gole, the instinct is to stop and contemplate. These could be sobering remarks for many of the Turkish intellectuals who are feeling more and more depressed with the prospect of an ever-authoritarian Erdogan who would constrict Turkey’s regime if he gets elected as president in the first round of the elections on Aug.10.

Speaking to the daily Taraf on Aug. 2, Ertugrul Gunay, Turkey's minister of culture from 2007 to 2013, who resigned from the Justice and Development Party (AKP) immediately after the Dec. 17 corruption scandal erupted, was blunt enough to state, “If Erdogan is elected on Aug. 10, Turkey will be heading to catastrophe, if not elected, to salvation.”

People who had been close to Erdogan have been raising their voices and expressing their doubts as the elections come near. Dengir Mir Mehmet Firat, the “most important Kurdish personality of the AKP,” who had been in charge of AKP’s organization from its inception until 2008 and was the right arm of Erdogan for many years, recently first announced he will be voting for Selahattin Demirtas and then said the AKP’s corruption has become unbearable and resigned from the party.

On Aug. 4, Firat spoke in an interview with T24 — an online news website — about the presidential elections: “Erdogan appears to be the most likely winner. When I look at his behavior in recent times, I detect [an] increasing authoritarian tendency. A first-round victory of a candidate in a direct voting election is likely to accelerate this authoritarian tendency. This is dangerous for Turkey’s future.”

Firat clearly added that he fears Erdogan following the same course after he is elected. “Yes, I am afraid. Every citizen must be afraid. This country cannot bear such tension for long.”

Such “fears” and “concerns” are not voiced by those who had worked closely with Erdogan for years. The concern felt by the Western world was most explicitly reflected by a cover story in German magazine Der Spiegel. The magazine, knowing there are hundreds of thousands of Turks living in Germany, reserved 16 pages in Turkish for the story.

Two other candidates facing Erdogan who Gole described by “let’s see the other half, the full half of the glass,” and saw as positive prospects for the country, have become more visible in the few days before the election.

For example, the excellent Financial Times correspondent in Turkey, Daniel Dombey, in his article “Academic and diplomat takes on Erdogan” introduced Ihsanoglu to the international public opinion’s attention.

He described him in the following lines:

“Mr Ihsanoglu, an ingénu politician, never sought the presidency. But his résumé commended him as the joint candidate of a cluster of opposition parties, including the two biggest, the secularist Republican People’s Party and the Nationalist [Action] Party.

“His nine-year stint at the helm of the Organization of Islamic Cooperation, an intergovernmental body, and his background as an Islamic scholar were also seen as an opportunity for his secularist backers to look beyond their base to match Mr Erdogan’s appeal to Turkey’s often pious masses.”

And he fairly described the uneven race among the contenders:

“But the obstacles he faces are formidable. Mr. Ihsanoglu relies on a pair of campaign buses and seats on scheduled flights to get to his campaign events. By contrast Mr Erdogan has enjoyed the advantages of office for more than a decade, and is hugely favoured in media coverage, particularly on television.”

The state channel TRT did give coverage to Ihsanoglu and Demirtas only a week before election day while nearly every second its screen was filled by Erdogan. Demirtas, when he appeared live on TRT, started his talk by praising “the well-known reputation of the TRT because of its objectivity, fairness, honesty and professionalism.” His sarcasm was shared by Zaytung, a much-followed Turkish humor blog similar to The Onion. Zaytung, after the appearances of Ihsanoglu and Demirtas on TRT, even for very limited 15-minute occasions, tweeted, “TRT viewers finding out that 3 candidates will be running in the [presidential] elections are in state of shock.”

The world’s greatest living historian of the Middle East, Bernard Lewis, in his last book “Notes on a Century,” writes that he was struck and fascinated with the rich vein of humor in Islamic civilization, saying, “In the Middle East, Egypt has perhaps the richest tradition of all.”

It seems, as Turkey gets authoritarian, it will compete with Egypt in this field.

Nevertheless, Ihsanoglu, critical of current Turkish foreign policy and as reported by the Financial Times, thinks that he — or Turkey’s electorate — can halt such a drift on Aug. 10:

Ihsanoglu added that he does not believe recent polls showing Erdogan with more than the 50% support necessary to avoid a second round of runoff voting and contends that his support is closing in on that of the prime minister’s.

The international political arena and Turkey’s volatile neighborhoods should be patient until Aug. 10, to figure out whether Turkey will be anchored in further authoritarianism or whether we will all be watching another ball game.