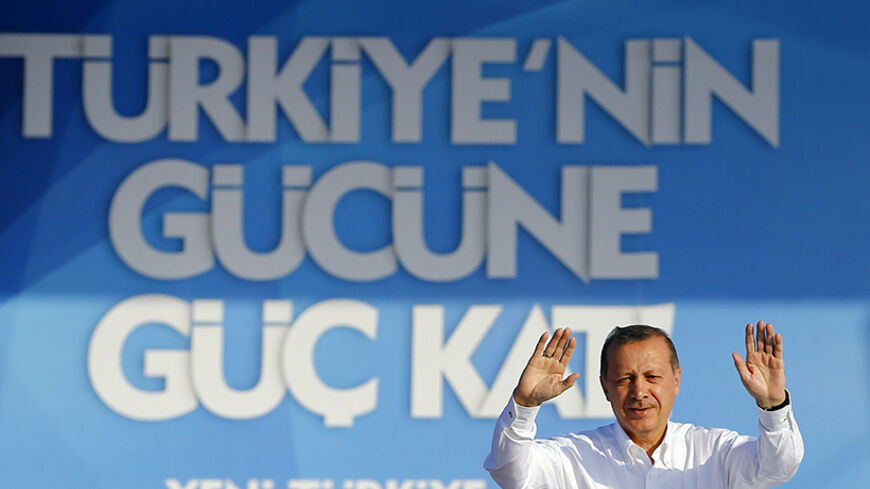 Prime Minister Recep Tayyip Erdogan is set to win the presidential elections on Aug. 10 and become Turkey’s first directly elected president. But will he assume the presidency after an election campaign that was conducted fairly and on equal terms for all the candidates?

His rivals do not believe this to be the case. They accuse Erdogan’s Justice and Development Party (AKP) government of using its powers to withhold equal time, denying them opportunity while promoting Erdogan.

The Organization of Security and Cooperation in Europe (OSCE) — one of whose tasks is to monitor elections in member states — agrees with this. An interim report by the OSCE office for Democratic Institutions and Human Rights (ODIHR) covering the period July 9-28 has found two serious problems in this regard.

It says the “campaign activities of the Prime Minister are large-scale events, often combined with official government events,” and underlines that the public visibility of the other candidates has been kept limited.

The report also points to the legal restrictions on freedom of expression, including on the Internet, and expresses concern that editorial interference by media owners and political actors has resulted in a lack of independent and investigative journalism. It argues that this has resulted in limited criticism of the ruling party and the prime minister.

The report also underscores the fact that there is no framework which currently provides for clear monitoring and reporting on the legal requirement of impartiality for broadcasters during the campaign. This is a particular sticking point for Erdogan’s rivals, especially in relation to the state broadcaster TRT.

Selahattin Demirtas, the presidential candidate of the predominantly Kurdish People's Democratic Party (HDP), has made a special point of underlining this in his public speeches. He has been lambasting the TRT, accusing it of effectively acting as the government’s mouthpiece spearheading Erdogan’s presidential campaign.

While Turkey has a large number of private channels — many of them forced in one way or another to turn pro-government — appearing on TRT is important for candidates as it reaches even the remotest villages, which private channels can’t.

TRT officials counter unconvincingly that they have been acting within the existing legal framework and only covering Erdogan’s public speeches in his capacity as prime minister, rather than as a presidential candidate. This, they claim, is the reason why TRT did not provide equal coverage for other presidential candidates.

In arguing this, TRT is using a loophole created by the Supreme Board of Elections (YSE), which on June 6 declared campaign prohibitions and guarantees aimed at ensuring equal opportunities for all the candidates until July 31. This meant in effect that TRT did not have to legally provide equal air time to either Demirtas or Erdogan’s other presidential rival, Ekmeleddin Ihsanoglu, until that date.

TRT could nevertheless give maximum coverage to Erdogan under the guise that he spoke as the prime minister, even though Erdogan was referring to his future presidential plans.

Two glaring examples of this were provided by the groundbreaking ceremonies organized by the government for Istanbul's third airport in June, and for the launch of a high-speed train line in July. In both cases Erdogan delivered addresses, covered live by TRT, as did most privately owned channels, during which he was clearly electioneering.

Not surprisingly, Demirtas — who says heads will roll over this if he is elected — was sarcastically scathing against the TRT in his opening remarks when he was finally allowed to broadcast a campaign speech over the state broadcaster on Aug. 3.

“I am experiencing the excitement and joy of being able to reach out to you on the screens of this rare and totally impartial and objective organization, which has approached all the candidates on equal terms, and has demonstrated the finest example of justice and courtesy toward me in particular,” Demirtas said, brandishing a sardonic smile.

The OSCE is not the only international organization Turkey belongs to that has criticized the unfair advantages being enjoyed by Erdogan during the presidential campaign. Members of the Parliamentary Assembly of the Council of Europe (PACE) visited Turkey, on the invitation of its non-AKP members, on July 21-22 to investigate the matter.

In a statement issued after their visit, PACE members warned Turkey’s Radio and Television Supreme Council (RTUK) that TRT should make a clear distinction between Erdogan’s official speeches as prime minister, and those in which he was clearly campaigning.

“The issue of misuse of administrative resources was raised on several occasions during the meetings,” the statement said, recalling that “all broadcasters, including the Turkish Radio and Television Corporation (TRT), are required to ensure an impartial and equal media coverage of the campaign, free from any self-censorship.”

The unequal opportunities Erdogan’s rivals face are, however, not just restricted to the limited airtime they have received on TRT. They have also been forced to fund their campaigns on public donations while Erdogan has been enjoying all the benefits of being in power.

He has, for example, been using the prime ministerial jet for months to travel from one end of the country to the other in order to reach out to supporters, an advantage that neither Ihsanoglu nor Demirtas can compete with. Erdogan stopped using the jet after YSE’s regulations came into force on July 31. This, however, does not do away with the unfair advantage he enjoyed for months and which his rivals did not have.

With most polls indicating a comfortable win for Erdogan, an obvious question comes to mind. Why is Erdogan allowing what most observers say would have been an almost-guaranteed victory anyway to be tainted by using undemocratic advantages over his rivals?

The answer is embedded in his past remarks. Erdogan has not only said that the nation will be electing its “leader” directly in these elections for the first time, but has also said — in defiance of the present constitution which does not allow for this — that he will exercise executive powers once elected.

He therefore wants to be elected in the first round on Aug. 10 by getting at least 50% of the vote. He also wants a result that is well above that in order to bolster his claim that he is the chosen leader of the nation.

He intends to use a strong victory in the presidential elections against those who in the future will say he is overstepping constitutional bounds. He is also relying on the AKP’s strong majority in parliament for this.

But Erdogan also needs the AKP to come out even stronger than today in the next general elections planned for 2015. This is necessary to change the constitution and turn the system in Turkey into a de jure presidential one where he can govern free of legal impediments placed in his path by the constitutional court or the opposition.

Erdogan and the AKP are therefore not only using all the opportunities that being in power provides to ensure the best result in the presidential elections, but are also looking ahead to the next general elections.

Given Erdogan’s self-declared plan to rule Turkey for the next decade at least, he clearly has no time to waste on the niceties of fair and equitable elections today.