The Turkish consul general and 48 other employees are still being held hostage in Mosul by the Islamic State, while the group uses the consulate building as its headquarters. 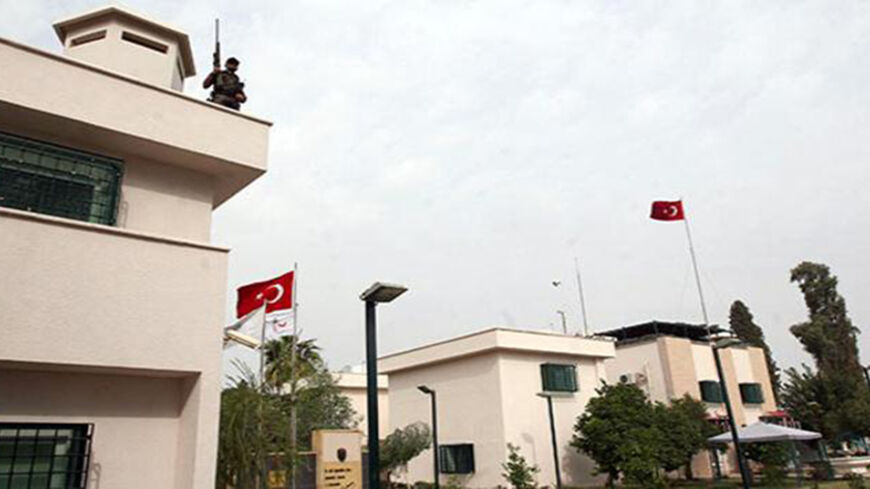 An undated photo shows the Turkish Consulate in Mosul before its capture by the Islamic State. - Twitter/jmsardo

When Abu Bakr al-Baghdadi, the enigmatic leader of the al-Qaeda-inspired Islamic State (IS, formerly the Islamic State of Iraq and al-Sham, or ISIS), appeared on a video posted online in early July addressing a congregation of faithful at a mosque in Mosul, pundits oozed commentary about his words and his attire. Was the self-declared caliph’s watch a Rolex? If so, how did this sit with the teachings of Islam? they mused.

But a no less significant detail escaped unnoticed. After his fiery speech, Baghdadi was whisked away to the Islamic State's new headquarters — the Turkish Consulate in Mosul. “It is absolutely true that IS has been using the Turkish Consulate as its main headquarters and that Baghdadi spent several hours there,” confirmed Atheel al-Nujaifi, the governor of Mosul, in a telephone interview with Al-Monitor. “It is their office.”

Not that the Turkish public would ever know. Soon after IS stormed the Turkish Consulate on June 10, taking all 49 there hostage — including Consul General Ozturk Yilmaz — Turkey’s Justice and Development Party (AKP) government passed a law that effectively bans all public debate and reporting of the crisis. The rationale for this crude display of censorship, which has become a trademark of AKP rule, is that discussing the fate of the hostages might put their lives at risk. While there is some merit to this argument, it is also true that the Mosul affair is a huge embarrassment for the AKP government, not least because of glaring lapses in security. Nujaifi had, along with Turkey’s national spy agency MIT, advised that the consulate be evacuated days before the IS raid only to be vetoed by Turkish Foreign Minister Ahmet Davutoglu, according to media reports. In a characteristic fit of hubris, Davutoglu is alleged to have argued that “the Turkish flag must continue to fly.”

Not only did IS attack the Turkish Consulate — it is occupying it. Yet, fearful of provoking the jihadists, Turkey’s often bombastic prime minister, Recep Tayyip Erdogan, has not uttered a peep. To the contrary, Erdogan has lashed out at those he claims want him to "provoke" IS. And he has warned the United States against any airstrikes against IS in Iraq.

More recently, he referred to IS, which is officially designated as a terrorist group by Turkey, as “an organization,” with no qualifiers added. Speaking at an iftar dinner, he implored that IS free all its Turkish captives. “A Muslim would not inflict this cruelty on another Muslim brother,” Erdogan said. This prompted critics to claim that Erdogan was calling IS “brothers.”

Syrian and Turkish Kurds, meanwhile, continue to accuse Erdogan of letting IS use Turkey as a logistical base to pursue its campaign against the Syrian Kurdish militia known as the People’s Protection Units (YPG). Clashes between the jihadists and the Kurds have escalated around the town of Kobani, which lies opposite the Turkish township of Suruc. IS views Kobani as a strategic prize.

At least 800 Turkish Kurds are believed to have crossed the border in recent days to take up arms alongside the YPG. About a thousand more Kurds are expected to join them on July 19, which marks the second anniversary of the “liberation” of Kobani from Syrian regime forces. “Kobani has become the new rallying point for the Kurds,” Ahmet Sumbul, a veteran Kurdish journalist based in Diyarbakir, told Al-Monitor. “And most believe that Turkey is helping [IS],” he added. All of this imperils the peace negotiations between Turkey and the outlawed Kurdistan Workers Party (PKK), the Turkish rebel group that is closely linked to the Democratic Union Party (PYD) and the YPG.

Nujaifi declined to comment on possible collusion between Turkey and IS in Syria. “I am unaware of what is happening in Syria,” he said.

And what of the Turkish hostages? “[IS] said they would release them ‘soon,’ but that was many weeks ago,” Nujaifi said. It is more likely that IS will hold on to them “for a while because IS wants to keep Turkey out of Iraq,” Nujaifi explained. Senior Western officials who are closely monitoring the situation agree that IS has no incentive to release the Turks, as this is their best way of ensuring that Turkey does not carry out any kind of military action against the jihadists. “Turkey apparently believed that it had some kind of entente cordiale with them,” said one. “Whether it did or not, after Mosul it has been forced into one,” the official concluded.

As for Turkey's flag, Nujaifi noted that it no longer flew over the consulate building, but he added that IS had not yet raised its own colors.