Don't look to Yemen model for solutions in Iraq

US President Barack Obama and others have referred to the “Yemen model” as an option to transition power from Prime Minister Nouri al-Maliki and restore order in Iraq, but Yemen's own results have been disastrous. 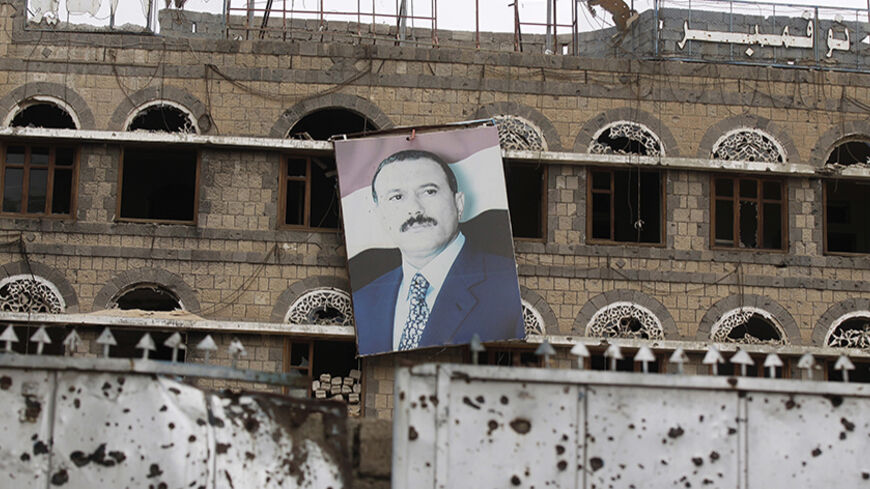 A portrait of Yemen's former President Ali Abdullah Saleh hangs on the wall of the former headquarters of his General People's Congress party in Sanaa, May 12, 2014. - REUTERS/Khaled Abdullah

At a May 19 press conference in Washington, US President Barack Obama had expressed concerns about the deteriorating situation in Iraq and the Islamic State's (IS) control over Iraqi cities. As a solution to that political and security crisis, he suggested the possibility of what has become known as the Yemen model, which stems from the transition of power from President Ali Abdullah Saleh to his deputy, Abed Rabbo Mansour Hadi. The process also included a plan to restructure the army, launch an inclusive national dialogue and for all participating parties to put down their weapons.

Obama is not the only one to praise the Yemen model, which is laid out in the road map of the Gulf Initiative. In discussions with Al-Monitor, various diplomats and international envoys have also praised this model of international intervention in Yemen, an Arab Spring country. In fact, however, the Yemen model about which Obama and international reports speak — a model efficient at both the security and political levels — has nothing to do with the current reality.

A key point missed by Obama and others is that IS has been inspired by the Yemen model — that is, in seeking to follow the model of insurgency and state-building of al-Qaeda in the Arabian Peninsula. In fact, the Islamic State’s control over Iraqi cities has followed the experience of Yemen’s al-Qaeda-linked Ansar al-Sharia, which has taken control of some Yemeni cities and imposed its strict version of Sharia. For a time during 2011-12, the Yemeni provinces of Abyan and Shabwa were under the control of al-Qaeda, the group the United States still considers most threatening to its national security.

The Yemen model has also been held up at international forums and in diplomatic and media circles as a potential solution for Syria, as a model for state-building, a peaceful transition of power, the elimination of armed groups and an end to civil war. Such a comparison between Yemen and Syria, however, is premature. The number of embassies operating in Sanaa, for example, is less than those in Damascus. While the Syrian government has made Damascus secure enough for foreign embassies to operate, despite being in a state of war, the Yemeni government has failed to secure its own capital, a reflection of the government’s failure to build state institutions and establish security.

Behind closed doors, many of the local players and international diplomats who admire the Yemen model and speak of applying it to the Syrian scenario have also expressed their fears to Al-Monitor that President Bashar al-Assad’s bloody steadfastness might actually inspire former Yemeni President Saleh to attempt to regain the presidency, by force if necessary. This fear alone would appear to undermine all claims to success for the Yemen model. How can a political transition be considered effective when the head of the former regime still poses a threat to the transition process?

The Yemen model has failed to provide the most important foundation of the transition and political and security stability, namely, building a state. More than two years after the start of the political transition, and less than a month after Obama praised it, Foreign Policy published its fragile states index, ranking Yemen as the 8th most fragile, five places below Iraq, which was ranked 13. Other Arab Spring countries — including Libya (41st) and Syria (15th) — had better rankings than Yemen.

One will be able to speak credibly of a successful Yemen model when there is security in the country (i.e., a unified army and few risks from armed groups), a stable national economy, at least a minimum level of public services delivery, fair elections for bringing leaders to power, a normal development cycle and no more of the current bloodshed. Yemen today does not meet these criteria.

At the security level, killings, assassinations and banditry continue, increasing periodically, and fighters take out power lines and oil pipelines with impunity. Moreover, traffic between cities is sometimes halted as gunmen cut off roads amid rife kidnappings. The strength of the armed groups has been consolidated at the expense of the state's image and presence. In mid-July, Houthi groups tightened their control around the 310th Brigade in Amran governorate and killed the brigade commander, who is loyal to the Muslim Brotherhood, after months of fierce confrontation.

Thus, the level of violence as well as security and sectarian tensions in other parts of Yemen have increased while Yemeni President Hadi has contented himself with the formation of a mediation committee, a format introduced at the start of the transition process that has thus far proven to be unsuccessful. Hadi has not clarified the situation regarding the Houthi situation in Amran, including whether the camp commander was fighting under orders of the state or if the state even offered its support. The state’s approach to war and peace has not become clear, but regardless is without progress in both instances. The sudden emergence of the Houthis from the north has terrorized Sanaa, as the bordering northern and western areas are now vulnerable to attack. Amran is no more than 50 kilometers (31 miles) from Sanaa.

Amid this chaos, it is unclear what about the Yemen model is supposed to inspire the Iraqi people as opposed to the inspiration the Yemeni armed groups' advances might provide Iraq’s armed sectarian forces. The most notable achievement of the Yemen model is that it has normalized death and diversified its causes, as insecurity and the number of armed conflicts have grown. This flies in the face of the international goal of sparing Yemen a civil war.

While in 2011 the threat of war between divisions of the army loomed, the possibility of multiple civil, military, sectarian and regional conflicts are present today. In short, while Yemenis' priority was to avoid a classic civil war, the issue today is how to avoid multiple civil wars. Over the past two years, the violent turmoil has led to the deaths of thousands of people and caused economic disaster. According to the United Nations, more than 14 million Yemenis need humanitarian assistance, including more than 1.5 million children, compared with 8 million Yemenis in 2011.

The Gulf Initiative has played a part in turning Yemen into a country over which armed groups run riot while seeking to delegitimize the existing authorities for exceeding their electoral terms. Given the security tensions and level of danger, the likelihood of seeing a foreigner walking the streets of Sanaa has the same odds as seeing a niqab in Las Vegas. Yemen is a failed state gradually being overrun by militias. This is the Yemen model being replicated in Iraq and Syria.