What will happen after Sanaa's fall?

Many scenarios explain the fall of Sanaa to the hands of Houthis and the period that will follow in Yemen. 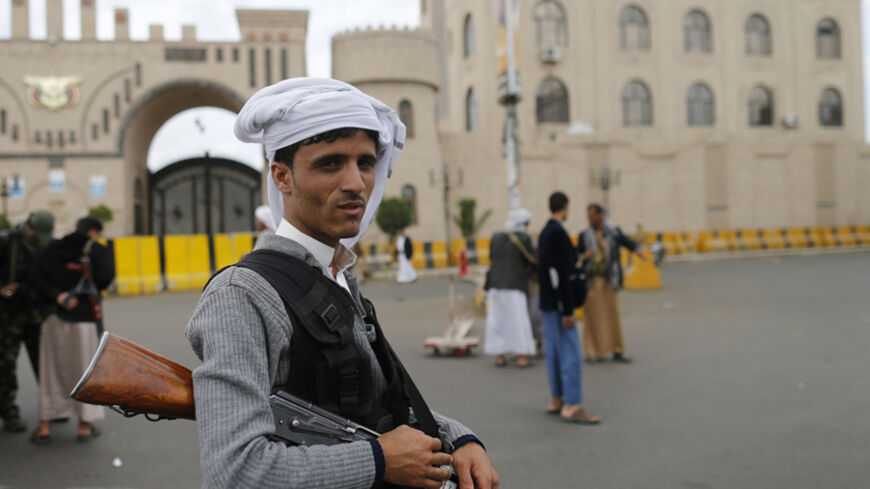 Yemen entered a new era Sept. 21 after Sanaa's fall, which will change the country's map for the next decade or two. Still, the implications of this historic event and its risks have not been carefully examined. Instead, the UN envoy and the Yemeni parties have been preoccupied in covering what happened under the banner of a fragile agreement that claims to uphold national peace and partnership.

This agreement will fail to stop the war machine in the country because it's simply a political covenant imposed by the weapons of the militia rather than the state. It's an agreement trying to legitimize the fall of the capital and cover the truth on the ground, which is the collapse of the Yemeni state and its replacement by militia forces taking control of its streets and expanding militarily to the rest of the country’s provinces.

First and foremost, it's important to shed light on the scenarios put forth by analysts concerning the capital's fall. According to the first scenario, President Abed Rabbo Mansour Hadi had previously agreed to let the Houthis enter Sanaa to get rid of the Muslim Brotherhood’s military wing in Yemen, with regional and international consent, but the Houthis did not play by the rules. They did overthrow the Brotherhood’s military wing, but also some of the state’s institutions, such as the national TV station. According to a Yemeni affairs expert who wished to remain anonymous for security reasons, the Omani mediation reached an agreement between Hadi and the Houthis to oust the Islah military wing, but the Houthis breached the agreement.

The agreement also comes in the context of fighting terrorism, as the Islamic State (IS) fighters are expected to flee from Iraq and Syria to Yemen. Some analysts such as Gregory Johnson, who wrote “Last Refuge” about al-Qaeda in Yemen, and Ibrahim Sharqieh hold that the West saw the best way to fight al-Qaeda as through the Houthis instead of the weak Yemeni government.

According to this scenario, a religious party such as the Islah Party — which has a broad political movement, takes part in the peaceful political process and recognizes the elections and the constitution — has been replaced with religious militias that do not have any political movement or experience and would rule by force. This suggests that the political process in Yemen has been fully undermined and the country is being dragged into conflicts, while all political options to prevent a civil war have been eliminated.

Such a war would be sectarian, even if some argue that Yemen has never seen a sectarian war before. However, this does not mean that following the collapse of the state, Yemeni society would not fall into this quagmire, with the regional sectarian tension affecting Yemenis. This is especially true given the media hype and the foreign financial support of the different parties to the Yemeni conflict, in addition to the fact that the Zaydis are located in the far north of Yemen. This would give a regional aspect to the already existing sectarian tension in the country, as Yemen has already been through past wars between regions. Sanaa has witnessed armed clashes between both camps to control the mosques.

Al-Qaeda was once merely some armed groups in the mountains, received temporarily by certain tribes. Today, we find them forging political alliances with tribes that view the Houthis as enemies. This is taking place in the tribal Al-Bayda governorate in eastern Yemen, whose tribes have allied with al-Qaeda against the Houthis. Indeed, the organization has expanded to new areas in response to Houthi control, as is the case in al-Udayn district in the Ibb governorate, which fell in their hands.

There is another possible scenario. Hadi has been working with international and regional support, within the context of dividing Yemen. This scheme ostensibly aims to drown the north in chaos and sectarian war while establishing a state in the south to protect the international waterways under Yemeni control, especially since most of the Yemeni coastline is located in the south. Most of its military camps and heavy weapons have been moved to the south under the pretext of fighting terrorism, but with no order to take action when the Houthis headed toward Sanaa and took over.

In this context, Nayef Hassan, editor-in-chief of Al-Sharea, told Al-Monitor that many officers from the north talked to the newspaper about their concerns and doubts over the transfer of the Scud missiles and some of the surface-to-surface missiles to the south of the country, in addition to the warplanes that were also moved to the southern Al Anad air base. They said that fighting al-Qaeda does not require all these weapons in the south.

The scheme to divide Yemen has been on the table for a long time now. This plan was covered by the Saudi media and in an article by Nidaa Hilal, the former media adviser to the UN envoy to Yemen, Jamal Benomar. According to Hilal, the alternative plan appears to be to divide Yemen into two parts: a northern part under Houthi control and another southern part. At first sight, this might sound like a solution, as it would secure the shipping lines and the southern coastline. However, this plan does not seem likely to happen.

For now, Yemen is in principle divided at the levels of tribes, sects and regions and is unlikely to be divided into just two parts. Al-Qaeda has expanded in the south, taking advantage of the political turmoil. This state would be a battlefield for a proxy war between the Iran-backed movements and other groups that are supported by Saudi Arabia, which would further fuel the already inflamed regional conflict. Thus, the establishment of a stable state in the south is not viable, as it would only deepen the rifts between southerners themselves.

Yemenis and the entire world have lost a golden opportunity to help Yemen move toward a more stable and less corrupt democratic system through the excessive dependence on group and movement affiliations rather than on the state institutions’ support. Also to blame are the extension of the transition period to avoid holding elections, the renewal of a failed president and the appointment of a UN envoy with such a daunting mission.

Hope for Yemen does not lie in this peace agreement while trying to form a government for a failed state. The agreement seeks to appoint a prime minister in a country ruled by a president who cannot achieve his missions and form a government for a state with no control and unable to operate its institutions. Meanwhile, the militias have taken over the largest military power in the country.