Yemen’s Gulf Initiative, which gave President Ali Abdullah Saleh and many of his officers immunity in exchange for stepping down, has been followed by a rise in extremism. 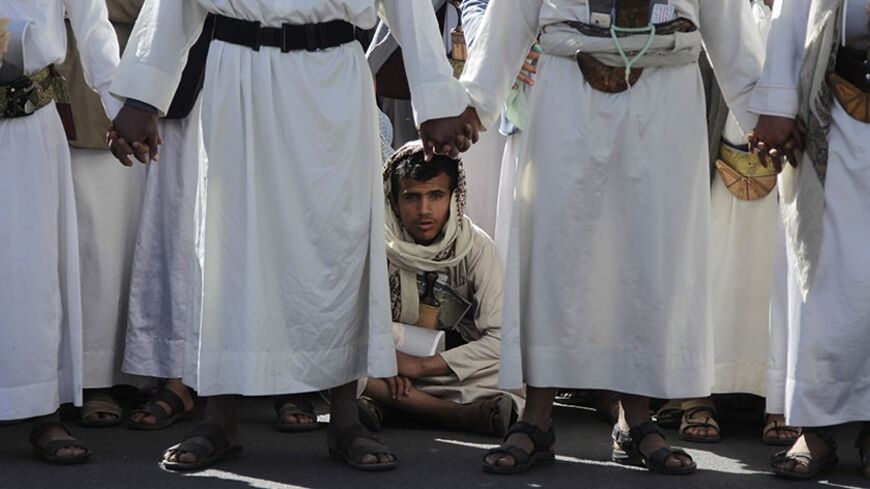 The armed conflict in Yemen pitting armed Houthi groups against al-Qaeda-supported Salafists reached the outskirts of Sanaa during the last two weeks. This ominous development can be traced back to the 2011 power transition initiative promoted by the Gulf Cooperation Council (GCC) and supported by the international community, and the sense of injustice it created among some Yemenis. The recent naming by the US Treasury Department of the Salafist Rashad Party Secretary-General Abdulwahab Humayqani as a specially designated global terrorist has only exacerbated the situation.

On Nov. 25, 2011, when Yemeni President Ali Abdullah Saleh and representatives of the opposition signed the Gulf Initiative for transfer of power in Yemen, opposition activist Abdel-Moneim Abu Ghanem and dozens of his comrades packed up their tents at Sanaa's Change Square, which for months had been the site of a sit-in demanding regime change. The young men did not go home and celebrate Saleh's departure; rather, they traveled to Abyan province to join Ansar al-Sharia, a branch of al-Qaeda in the Arabian Peninsula (AQAP). Abu Ghanem told Al-Monitor that he joined al-Qaeda to seek justice for fallen comrades, unarmed activists who had been shot by Salah’s forces — justice that was precluded by the immunity from prosecution granted Saleh by the Initiative.

Abu Ghanem said that while he debated with some of his colleagues who supported the Gulf Initiative, Yemeni security forces arrested him and imprisoned him for a few months, before his tribe, the powerful Arhab, intervened to secure his release. He said that at the time, Ansar al-Sharia was the only entity he and his colleagues could turn to for justice. Moreover, according to him, the organization was more impartial and transparent than the Yemeni government.

Other developments soon boosted the appeal of terrorist groups.

The Gulf Initiative had called for convening the National Dialogue Conference (NDC) to bring together all Yemenis to discuss the future of the country, resolve outstanding issues and draft a new constitution compatible with Yemen's new situation. Humayqani represented the Salafist Rashad Party at the NDC and was one of the most prominent participants, proving to be an intelligent and flexible leader, with an awareness and willingness to accommodate the views of others that no other Salafist movement leader in Yemen had ever shown. In December 2013, the US Department of the Treasury announced that it was adding Humayqani to its specially designated global terrorists list. The Treasury statement cited activities it claimed Humayqani had carried out in accord with AQAP. Humayqani denies the accusations and claims they are part of a plot hatched by local political opponents, who supplied false information implicating him to the United States to bring about such a decision. The NDC and Yemeni President Abed Rabbo Mansour Hadi objected to the decision and demanded that the United States remove Humayqani from the terrorist list.

The conference met for over nine months under the supervision of a special representative of the UN secretary-general. Technical, financial and political support was provided by the West, including the United States. Each member of the NDC was given a daily allowance of between $100 and $180, in addition to associated expenses. So the US Treasury Department claim of links between Humayqani and al-Qaeda raised interesting questions. For example, during the nine months of the NDC, did Humayqani receive financial allowances underwritten by Western taxpayers? Did the United States provide technical, financial and political support and sponsorship to a political entity whose members are linked to al-Qaeda and carried out the terrorist acts the Treasury cites?

Humayqani enjoys a popularity that cannot be ignored, even among people outside his group of supporters, his party or in the Salafist movement in general. He even enjoys the support of some liberals who are known for their staunch opposition to religious extremism and al-Qaeda. From the pulpit of the NDC, he succeeded in convincing many of his democratic leanings, and he constantly reiterated that he was not with al-Qaeda. The US decision to declare him a terrorist only increased his support among the masses. As a result, there are now photos of Humayqani, accompanied by slogans of support, even in the qat markets of Sanaa.

If Humayqani is in fact telling the truth, his inclusion on the terrorist list is also a blow to the Salafists who support forming political parties and participating in elections, and a potential boon to more extremist currents that refuse to participate in the political process. This could create new ideological alignments benefiting al-Qaeda and its affiliates, which are betting on the failure of democratic tools and on the power of their own tools, such as suicide bombings and armed attacks.

Al-Qaeda is not the only extremist armed group that took advantage of the Gulf Initiative to spread its rhetoric and expand its base. Other armed groups that benefited include the Houthis, an armed sectarian group that fought six wars against the state during the Saleh era before it succeeded in taking control of Saada province and later parts of Hajjah, al-Jawf and Amran provinces. The Houthis also fought tribal and sectarian wars against Salafists and the latter's tribal supporters in Dammaj, Harad and Kataf, along the Saudi border; these conflicts spread to the outskirts of Sanaa a few weeks ago. The NDC provided political cover for the Houthis, who used the conference to present themselves as a group committed to peaceful and civil means, while engaging in fierce battles with Salafists in Saada. For the Houthis, the conference offered political legitimacy that the group leveraged to defend the bloodletting outside the conference halls.

While the state contents itself with playing mediator between the Houthis and the Salafists, al-Qaeda has declared its solidarity with the Salafists. This increases the appeal of al-Qaeda among Salafists who oppose democracy and raises terrifying questions about these different groups in the near future and the alignments likely to emerge. The decision to include Humayqani on the terrorist list has hampered the chances of bringing Salafists into the political process and encouraging their faith in the process and its tools.