The surge of anti-Semitic and anti-Israeli demonstrations in Turkey, inspired by critical remarks from Prime Minister Recep Tayyip Erdogan, forces Israel to set aside attempts at reconciliation. 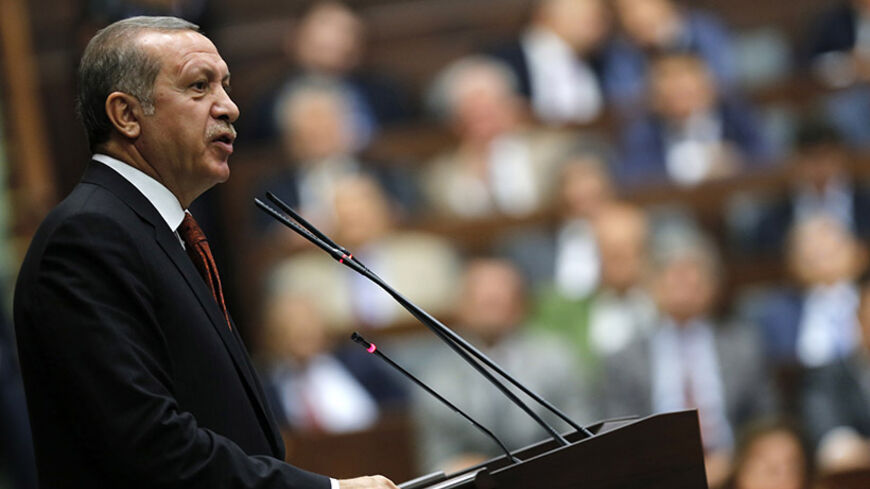 Few Israelis noticed the reports about the violent demonstrations and threats against Israeli diplomats at Israel’s missions in Turkey — the embassy in Ankara and the consulate in Istanbul — since Prime Minister Benjamin Netanyahu ordered the Israel Defense Forces to respond to rocket attacks from the Gaza Strip. The incessant reports about the rocket fire from Gaza and Israel’s offensive in Gaza also drowned out the disparaging, virulent incitement by Turkish Prime Minister Recep Tayyip Erdogan.

Israeli officials believe that Erdogan’s invective was the cause of the unprecedented displays of violence by thousands of Turks against Israel. The wave of anti-Semitism sweeping Turkey in recent days, directed at the Jewish community there, was barely reported in Israel. Media outlets had little time to update viewers on anything directly unrelated to reports of Operation Protective Edge.

Many Israelis, on edge as a result of having to conduct their lives in the intervals between warning sirens and within a 90-second radius of a shelter, were until days ago counting the minutes until the summer vacation they had booked at one of Turkey’s resorts. They were eagerly awaiting the moment when they could travel there, leaving behind their sense of fear, the constant run for cover and the threat of rockets.

The spokesman for the Israeli Airports Authority, Ofer Leffler, told Al-Monitor that 45 daily flights from Israel to Turkey were planned for this summer. According to Leffler, the planned flight schedule for the summer months had more flights from Ben Gurion Airport to Turkey than all of El Al’s annual flights from its hub.

Israelis, so it seems, were convinced that a new page had been indeed turned in ties between the two states, which have known ups and downs since the Mavi Marmara flotilla left Turkey for the Gaza Strip in 2010. The tourism industry prepared for more than 250,000 Israeli travelers to Turkey this summer.

Thus, many Israelis were surprised and even disappointed by the end of the week when the Foreign Ministry issued a reminder of a previous travel advisory for Turkey on its Facebook page, advising Israelis “to avoid nonessential travel” there. The Foreign Ministry debated for days whether to issue such a statement, but the reports coming from the embassy in Ankara indicated a clear danger. The diplomats felt threatened by the mob, which “stormed the mission intending to carry out extreme acts,” they said.

That Erdogan’s youngest daughter, Esra Albayrak, took part in one of the first protests across from the Israeli Consulate in Istanbul was perceived by Jerusalem as a blessing from the Turkish prime minister for such acts. To judge by events on the ground, the demonstrators did indeed understand the message and internalized Erdogan’s blessing. According to reports reaching Jerusalem, Turkish police, which had spared no means to disperse anti-government protesters during the events of Gezi Park and the ensuing protests, “did not display any special effort to disperse the protesters.”

After the first wave of demonstrations, Israel still hoped they were isolated, localized incidents. Following an assessment of the situation, it was decided not to undermine the prospects for completion of the normalization process between the two states. But Erdogan started breaking his own records in speaking out against Israel. On July 15, he compared a Knesset member to Hitler and accused the State of Israel of ongoing genocide. With every new pronouncement, Erdogan ratcheted up the incitement and hatred, setting a new bar to which his party colleagues and associates aspired. Ankara Mayor Melih Gokcek, one of the prime minister’s closest associates, expressed solidarity with Kurdish-born Turkish singer Yildiz Tilbe, who asked Allah “to bless Hitler. What he did to them [the Jews] was too little.” Erdogan ignored these words.

When reports reached the Foreign Ministry of vandalism at the building housing the Israeli Consulate in Istanbul and the hanging of a Palestinian flag on the walls of the Israeli ambassador’s residence in Ankara — while police continued to stand idly by — Israeli security officials decided to order the immediate return of the diplomats’ families to Israel.

Israeli Foreign Minister Avigdor Liberman demanded a decisive response to Erdogan’s vitriol, and at the end of deliberations with professionals in his office he ordered the diplomatic representation in Turkey reduced to a bare minimum. In a statement he issued, the foreign minister said, “Israel protests strongly against the flagrant violation of diplomatic rules, Vienna Convention and others, by Turkish authorities and its security forces during demonstrations, and we hold the Turkish government responsible for the safety and well-being of the Israeli representatives serving there.”

In conversations with senior Turkish officials, Al-Monitor was told that at the start of the crisis Turkey offered Israel its help in contacts with Hamas, but the offer was rejected due to the delay in restoring normal ties between the two states. As for Erdogan’s vitriolic speeches — which have become the norm over the years — Turkish officials tried to soften the tone and stressed to their colleagues in Jerusalem that these were in fact part of his election campaigning.

Turkey will be holding presidential elections in less than a month, on Aug. 10. Two candidates are running in addition to Erdogan. The prime minister, who wants to be president for the coming 10 years — at least — has set for himself a goal of winning in the first round, which requires a majority of the vote of more than 50%. Turkish diplomats wish to attribute Erdogan’s anti-Israel and anti-Semitic rhetoric to election fever. Erdogan believes it will enable him to obtain the required votes to win the first round — the explanation will follow later. It is hard to believe, but hatred of Israel is considered an electoral asset in today’s Turkey. Anti-Semitism, so it seems, attracts voters.

Criticism is legitimate. Israel has taken it and is taking it from its friends and enemies. But Erdogan’s rhetoric is not only unacceptable among the civilized, Israeli officials say, it is reminiscent of dark times. Erdogan is not a leader of a fringe radical party seeking attention in town square speeches. Turkey is a senior member of NATO, is still seeking — at least so it seems — European Union membership and is an influential member of international organizations.

This is exactly what Netanyahu feared when he delayed signing the document of understandings since the beginning of the year. For years, I have been calling, on this site, too, for every effort to be made to fix the ties between the two states. This is not the time to analyze and assess what might have happened had it been done in time. But now, so it seems, there is not much left to do but to let go.