There are questions whether Turkish Prime Minister Recep Tayyip Erdoğan is trying to shirk responsibility for Istanbul protests by pointing the finger at Israel. 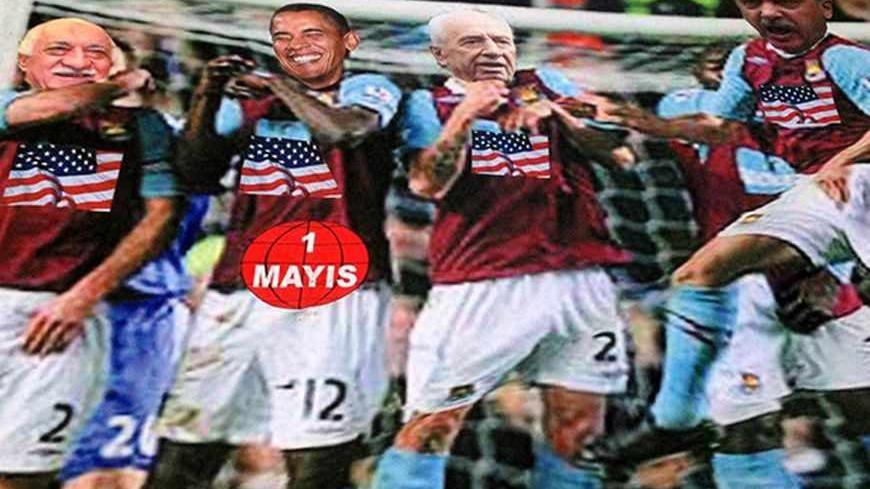 Turkish Prime Minister Recep Tayyip Erdogan apparently finds it difficult to put the Marmara flotilla affair behind him and overcome his aversion to the government of Israel.

This was evident even in the violent demonstrations that broke out this month (June 2013) in Istanbul. And even though Israel was not explicitly mentioned by name in the rallies that took place in Gezi Park and Taksim Square against the heads of the Turkish regime, the media outlets closely associated with the latter insist on accusing Israel of “fanning the riot flames.”

Following years of overt anti-Israeli sentiment in mass demonstration where the slogan “Israel is a murderer” — Katil Israil — had been commonly used in Turkey, it was strange to encounter on the very same streets and squares demonstrators calling, and banners proclaiming, “Erdogan is a murderer” — Katil Erdoğan. As a rule, the protest movement recently sparked in Turkey has refrained from making use of Israel to further its goals.

On two occasions alone I noticed, in Gezi Park, posters alluding to Israel — the one, drawing an analogy between Recep Tayyip Erdogan and Israeli Prime Minister Benjamin Netanyahu, punning, in Turkish, on the names of the two; the other featuring a picture of Israeli President Shimon Peres as a football player standing guard alongside President Barack Obama and Fethullah Gulen (the moderate Turkish Islamic leader living in a self-imposed exile in the United States, who advocates a dialogue between religions and who has become in recent years a political rival of Erdogan), while Erdogan scores a goal.

Israeli officials closely following the events in Turkey assessed that those posters were inspired by none other than the ruling party, the AKP, which sought to drag Israel into the dispute — in an attempt to both delegitimize the protest and strengthen the traditional political power base of Erdogan.

This assessment was reinforced toward the end of the second week of the protest, when Prime Minister Erdogan was cited as saying, after watching documentation of the massive destruction caused to shops and businesses in Istanbul: “Those whom we told ‘one minute’ are happy now.” The phrase “one minute” is the one Erdogan used in Davos on January 2009, when bursting out at Shimon Peres. Every child in Turkey understands the meaning of the phrase and knows who are “Those whom we told ‘one minute’” — and to put it explicitly, it is Israel.

It seems that Erdogan took his cue from the banner headline published that morning by the Turkish pro-ruling party daily Yeni Şafak, which read as follows: “Israel wishes that the Gezi Park events will bring about the fall of Erdogan.”

Underneath, a large picture of Knesset member Reuven Rivlin was featured. Rivlin, whose name was erroneously spelled “Livnin,” was presented as speaker of the Knesset — a position he had to give up several months ago with great regret, following the establishment of the new government in Jerusalem. The “plea for the fall of Erdogan” was attributed to Rivlin, while the same news item went on to quote former Foreign Minister and current Chairman of the Foreign Affairs and Defense Committee Avigdor Liberman — who had strongly objected at the time to an Israeli apology for the killing during the takeover of the Mavi Marmara flotilla — as having stated that he “did not lose sleep over the developments in Turkey.”

When I checked with Knesset member Rivlin, as well as with Liberman's bureau, both emphatically denied the allegation! Rivlin stressed the importance he attached to the relations between Israel and Turkey, under any circumstances whatsoever, while Liberman reiterated his position that Netanyahu's apology to Erdogan was a mistake, but denied any association with the statement attributed to him.

Later on in the week, similar allegations were made by other Turkish media outlets close to Erdogan. That time around, the “plea for the fall of Erdogan” was attributed to Knesset member Moshe Feiglin, the far-right Likud party member who is serving as the Knesset deputy speaker.

I asked  Feiglin whether he had made any such statement, and he, too, denied having ever said anything of the sort. (In fact, no allusion to such statements may be found in Hebrew search engines.)

The leak concerning the visit to Ankara of Mossad chief Tamir Pardo on June 10, at the height of the protest wave, is another instance of this discourse, which seeks to attribute responsibility to Israel for fanning the flames of protest in Turkey. Pardo's visit to Ankara was supposed to be secret. However, there apparently were elements interested in tying him to the protest demonstrations.

According to reports on the visit, the Israeli Mossad head and Hakan Fidan, chief of the Turkish Intelligence agency (known also as the “secret police”), discussed the goings-on in Syria and Iran, and even … the Gezi Park events.

One may wonder what Pardo had to do with the Gezi Park protest. Well, the answer is quite simple: Erdogan wants to disassociate himself from the riots and lay the responsibility for the unrest on “foreign elements.” To achieve this aim, he goes as far as to use the familiar anti-Semitic rhetoric and, for instance, points the finger at “interest groups that stand to benefit from the increase in interest rates.”

Israelis are closely following the developments in Turkey. And many yearn for the success of the thousands that are calling for the resignation of Erdogan and his government. It seems, however that the decision to send Tamir Pardo to meet with Fidan — who is a close confidant of Erdogan — in the midst of the protest wave shows that the Israeli government does not expect any deterioration in the standing of the incumbent Turkish prime minister.

It is not hard to figure out what the Israeli Mossad chief had to tell his Turkish counterpart on the first two issues mentioned by Turkish daily Hurriyet. As to the third issue supposedly discussed by the two Intelligence heads, one may only speculate whether the Turkish host sought to learn from the Israeli experience of 2011 — how to contain a whole summer of sweeping social justice protest, which ultimately leads to nothing …

Arad Nir Is the head of the foreign news desk and international commentator for Channel 2 News, the largest news provider in Israel. He teaches TV journalism at the IDC Herzliya and Netanya Academic College.