Having lost his allies in Egypt and Syria, Turkish Prime Minister Recep Tayyip Erdogan’s route to maintaining his role in the Middle East passes through Israel. 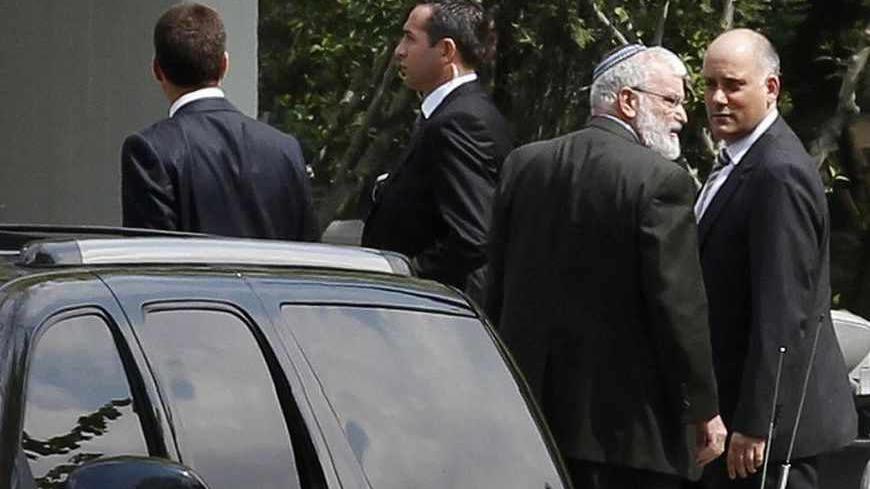 An Israeli delegation arrives at the Turkish Foreign Ministry to hold talks on compensation for families of victims killed in a 2010 naval raid on Turkish-led humanitarian-aid convoy to Gaza, in Ankara, April 22, 2013. -

In the days preceding the military coup in Egypt, the Turkish press discussed at large the Gezi Park riots in Istanbul and their impact on the future of Turkey. At the time, the Turkish local media was swept by a wave of anti-Semitic and anti-Israeli statements made by Prime Minister Recep Tayyip Erdogan and his ministers, who accused Israel of fanning the riot flames.

There were those who rushed to lament the reconciliation process between Turkey and Israel launched with Prime Minister Benjamin Netanyahu’s apology to Erdogan on March 23. This process reached an impasse following two rounds of talks on the sum Israel was to pay in compensation to the families of the Turkish nationals killed and wounded in the May 2010 raid on the Gaza-bound Mavi Marmara flotilla.

However, the recent events in Egypt have changed the game in the Middle East. With the ouster of Egyptian President Mohammed Morsi, Ankara has lost an important ally and it thus has to re-evaluate its interests in the eastern Mediterranean. When Morsi was elected to lead Egypt as the Muslim Brotherhood representative, Erdogan reshaped his policy in the region.

The Turkish premier, who sees himself as the guardian of Hamas in Gaza, found in Cairo a strategic fulcrum, which he planned to use to wield his influence. To consolidate his ties with the new Egyptian regime, he even invited Morsi as his guest of honor to the 2012 Justice and Development Party conference in Ankara. With Morsi by his side, Erdogan delivered a programmatic speech characterized by manifestly Islamist undertones, and promised to grant Egypt a $2 billion aid package (compared with the US aid package of $1.5 billion and the pledged European Union amount of 500 million euros).

It is not for nothing that Erdogan is the only head of state who has openly backed the deposed Egyptian president and dubbed his removal from power a "coup d’état." In fact, Erdogan did not hesitate to say outright what many in capitals throughout the world probably thought but remained silent due to various interests. On the moral level, his statements draw on the history of the Turkish Republic, which has experienced violent military coups. At the same time, his position may be attributed to the fact that he sees the Egyptian Muslim Brotherhood as a sister party and Morsi as an ideological partner and personal friend.

At present, Morsi is detained by the military, and the foreign-policy makers in Turkey are well aware that they have lost the strategic axis between Ankara and Cairo. As seasoned and pragmatic diplomats who know when flexibility is needed (as evidenced in past stances vis-a-vis Syria, Iran and Libya), they must have also realized that they should look for alternatives. Before long, Erdogan will have to draw anew the map of his country's interests in the eastern Mediterranean. It thus seems that the prospects for the rehabilitation of Turkey's diplomatic relations with Israel have now been revived.

In the Turkish Foreign Ministry there are still some diplomats who believe in the necessity of maintaining ties with Jerusalem. It has no doubt been suggested in the situation assessments currently held in the Turkish capital, that in the wake of the recent events in Egypt, the Ankara-Jerusalem axis has become relevant once again. If Turkey still sees itself as an influential element in the region, now that it has lost its foothold in Egypt and in Syria, then Israel remains the last potential fulcrum it may have.

When Turkish Foreign Minister Ahmet Davutoglu formulated his country's foreign policy, inspired by his vision of Turkey becoming a regional power, he based it on two main principles: “zero problems with the neighbors” and the establishment of wide-ranging trade relations. Under the current circumstances, the restoration of diplomatic relations with Israel would be to Turkey's advantage. As to trade relations between the two countries, such ties have been maintained all along and continued to flourish even at the height of the crisis.

The means for resolving the problems between Ankara and Jerusalem have already been formulated and agreed on. The only controversial issue is the sum Israel will be required to pay in compensation. Since Netanyahu made the first move and apologized, it is now time for Erdogan to compromise, more so than ever before.

The day following the apology call from Netanyahu, Erdogan declared his intention to visit Gaza. The visit was postponed time and again, although the Israeli government voiced no objection to the trip. It has been pointed out in the Turkish media that in the aftermath of Morsi's deposal, the plans for the visit should be shelved. In the new situation, Erdogan will have no choice but to negotiate his way through Israel if he is to have any impact on the fate of his proteges, Hamas Prime Minister in Gaza Ismail Haniyeh and Chief of Hamas Political Bureau Khaled Meshaal.

In a July 9 Al-Monitor article, Kadri Gursel comes to the same conclusion. Gursel bemoans the anti-Israeli discourse that the Justice and Development Party, headed by Erdogan, continues to espouse.

In the heyday of the relations between Israel and Turkey, Davutoglu served as a special envoy mediating between Damascus and Jerusalem in an attempt to reach an arrangement. Later on, he gave up Jerusalem and opted for Damascus as the primary ally. The end of this love affair is known to all and sundry: The praises heaped by Erdogan on Syrian President Bashar al-Assad gave way to blatant denunciation.

In 2010, Erdogan received the “human rights medal” from then-Libyan ruler Moammar Gadhafi. Not long afterwards, Erdogan dispatched the Turkish fleet to assist NATO in the attack that led to the downfall of the dictator. It turns out that when a clear need arises, Erdogan is capable of changing both his diplomatic strategy course and his public discourse. It is about time to take this path with Israel.

Arad Nir is the head of the foreign news desk and international commentator for Channel 2 News, the largest news provider in Israel. He teaches TV journalism at the IDC Herzliya and Netanya Academic College.