Turkey's National Intelligence Organization (MIT) is undergoing a controversial image repair and institutional reconstruction after court proceedings revealed the agency's role in murders during the 1990s. 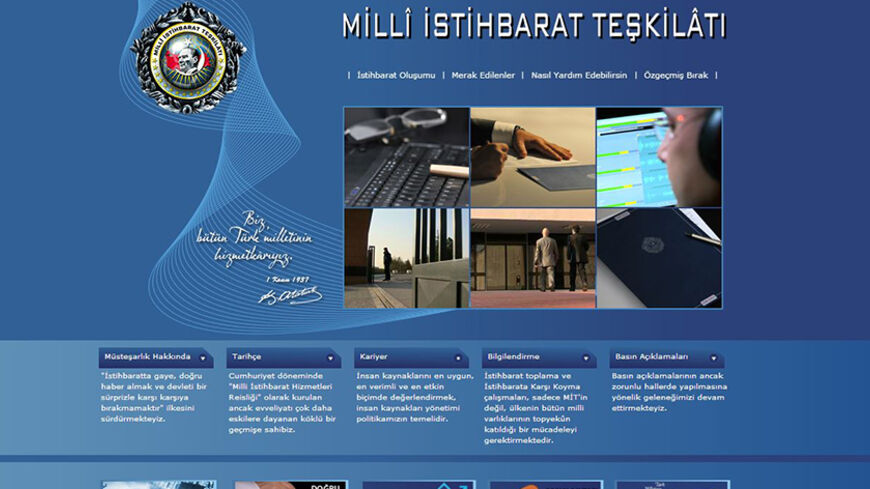 A screenshot of the homepage for the Turkish National Intelligence Organization. - mit.gov.tr

On July 10, news broke that several high-profile political murders of the 1990s were carried out with the knowledge of the Turkish state. There is now evidence that the state was indeed in command. The Turkish National Intelligence Organization (MIT) submitted, upon the request of the prosecutor, voice recordings and a transcript of a conversation dating back to 1995 between two of its former employees. One of them was the former head of the MIT Counterterrorism Unit.

Some 18 separate, unsolved murder cases from the 1990s were still in the courts as the MIT released the notorious 13-page transcript. The victims were mostly, but not exclusively, Kurdish businessmen, activists and intellectuals. In addition, further killing lists included singers and other famous names. A former MIT employee, Yaman Namli, testified that these lists were approved by the Special Warfare Command and the National Security Council (MGK).

The MIT has shared crucial documentation in the last year concerning two high-profile cases known as the Sept. 12 and Feb. 28 cases. All of these cases were part of a battle Turkish Prime Minister Recep Tayyip Erdogan had publicly promised: for further democratization and curtailing the powers of the “deep state.” The Justice and Development Party (AKP) takes pride in the struggle to face the past and to clean its slate. “State within the state” and now the “parallel state” rhetoric all follow in this logic. In this endeavor, the MIT has been cooperating with the prosecutors’ requests, which has set a precedent quite different from previous traditions. Previously, the MIT was known to brush off these demands or share much less. Keen observers of the institution refer to this as the “Hakan Fidan [the current undersecretary of National Intelligence] difference.”

The MIT has gone beyond the regular call of duty because the evidence that was shared with the courts indeed incriminates the MIT. Hence, it is fair to say that for the first time in its history, the MIT is willingly cooperating in an investigation that puts the organization itself on the hot seat.

A government official with high-level clearance told Al-Monitor: “This resembles the CIA sharing its covert operations archives and admitting to torture and other unacceptable deeds from the past. The MIT knowingly cooperates with the courts to clean its slate. This is also an indication of significant level of self-confidence.” The official highlighted a crucial point when he said: “The transcripts released not only admit that high-level MIT employees were involved in these crimes, but also how their dealings with the hit men were utterly unethical and shady.” The records revealed not only horrible murders committed in cold blood, but also that the money and belongings of the victims were shared by the murderers.

Spine-chilling conversations between government officials and hit men did not necessarily have to become public. Why did the MIT opt to take this challenging path? An official from the agency told Al-Monitor: “Because the institution is undergoing reconstruction, it wants to reveal the “dirty tricks” of the past to tell the public and its employees that the same methods will not be utilized anymore. It is coming clean on the path to renewal.” A new Turkey with an improved intelligence agency is the argument put forth by the ruling AKP.

The MIT is indeed under new management. We can observe the work-in-progress on at least two intertwined levels. First is the image change through intense MIT-generated public diplomacy. For an intelligence agency, the MIT is in the news more frequently than desired. Intelligence agencies universally make the news when they fail. Yet, in a quite a successful campaign, the MIT has evolved its cold, treacherous and shady image into a more approachable and even transparent one. As intriguing as this may sound, in the process of creating the “new Turkey,” the MIT is on the way to becoming one of the most trusted institutions of the country.

Erdogan and the other government officials frequently refer to the MIT in their public speeches and rallies and get strong cheers from passionate crowds. In the latest, Erdogan announced he believed the Turkish Communications Agency should be dissolved, since the MIT could assume out most of its duties. While the opposition criticized this suggestion bitterly, there was almost no reaction from the public. A prominent parliament member, Emine Ulker Tarhan of the Republican People’s Party (CHP), said, “The government wants to create a digital Gestapo.” In contrast, a group of women participants at an AKP rally told Al-Monitor, “Erdogan trusts the MIT; so do we.”

The change of image has been gradual yet quite drastic. The MIT has been the subject of a TV show for the first time, where the main characters openly identify themselves with the organization. Being at the center of the Gulen movement-AKP battle, the MIT almost emerges with the motto “What does not kill you makes you stronger.” A movie about how Fidan survived an attempted arrest is on the way, detailing how the organization, which was set to be passive, became so potent in the political arena. The movie’s title, “The Coup,” says it all.

Several “first time in history” moments have been observed in the MIT under Fidan’s leadership, particularly in the last year. In October 2013, for example, the MIT opened its doors to the media to show off its “Spy Museum,” displaying intriguing details about its past. Maybe the only organization in the state apparatus which could and should be less transparent provides a user-friendly webpage with statistics about the number of its visitors to the site and reports on its annual activities. Even its organizational and recruitment ads have been updated and are quite fancy.

On the second level, we see the signs of institutional restructuring. In February 2014, a new MIT law which extends the powers of the organization was brought to the parliament, but delayed due to opposition’s outcry. It was approved after the March 30 elections. The new law expanded not only the sphere of responsibility for the organization but also provided a thick level of insulation for its employees.

In the meantime, there was crucial institutional restructuring in the works at the MIT. Six new logos were revealed for six different sub-sections in the organization on July 17. The news, not denied by the MIT, argued that the MIT aimed to restructure itself along with the lines of a US intelligence model that housed several agencies under its intelligence community. Previously, the MIT had undergone some restructuring in 2009 and 2012.

Now the MIT is expected to have six separate departments. The new logos are for the following offices, some new, some existing: Strategic Analysis, Counterespionage, Foreign Operations Intelligence, Defense Intelligence, Signals Intelligence and Electronic and Technical Intelligence. This restructuring could be seen as a step in the right direction, yet, in one peculiar matter in the US intelligence community it is different. US intelligence services are attached to different departments, while in the Turkish case it is all designed to be under the MIT.

It is peculiar that, despite widespread anti-Americanism, we observe that pro-government media — following the words of Erdogan — presents all changes in the MIT as similar to the Western, particularly US intelligence agencies, whereas that opposition argues that the MIT is evolving in the Middle Eastern style of total subservience to the leader.

As the MIT evolves, it does impeccable media relations to convince the AKP’s voter base that it is an indispensable institution for them. Moreover, that public image change would surely be an asset for the AKP as long as it is in power. Now, AKP elites must ask themselves, will they be proud and content with our new institution when they are no longer in government?