A proposed law turns the MIT from an "intelligence-gathering" organization into a "powerhouse" outranking many Turkish ministries. 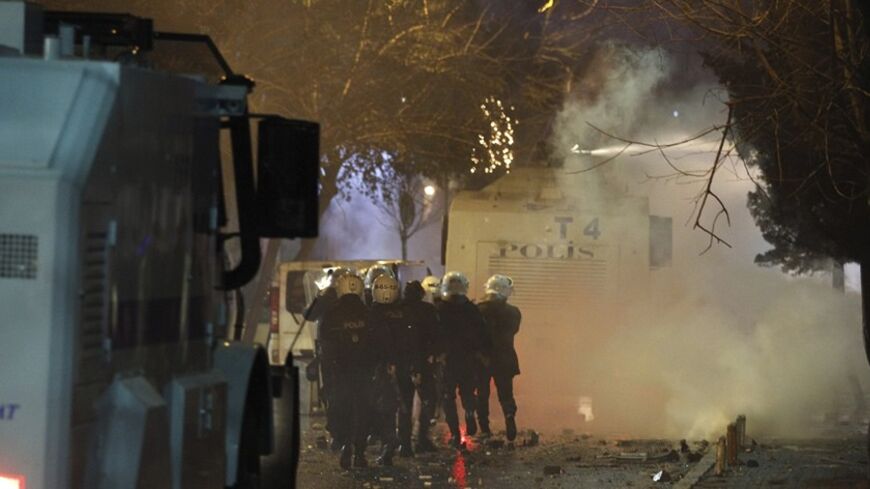 Police fire tear gas to disperse demonstrators during a protest in Istanbul against a new law tightening control of the Internet, Feb. 22, 2014. - REUTERS/Osman Orsal

Just before the start of the Syrian civil war, I wound up discussing the Jan. 25, 2011, Tahrir Square uprising with a group of dedicated Justice and Development Party (AKP) supporters at a cafe in Athens. When one of them claimed Syria would fall shortly after Tunisia, Egypt and Yemen, I said this would not be the case because of Syria being a spy state (mukhabarat) — meaning that it was highly skilled in crushing any civilian movement. I explained in detail how the Syrian regime had generated a rather elaborate system (four different agencies) to gather and process domestic intelligence to sustain the Baath regime.

In the last couple of months, those critical of AKP’s cycles of “new regulations” have been complaining about an evolution of Turkey into a mukhabarat state. Is Turkish Prime Minister Recep Tayyip Erdogan following in the footsteps of Syria’s former ruler Hafez al-Assad?

Almost everyone is confident that a bill in the parliamentary commission stage will soon be “the law of the land" in Turkey. The MIT bill introduces drastic institutional changes to the Turkish National Intelligence Agency (MIT). When I first heard about this, I was hopeful that finally there would be separate agencies for domestic and international issues, given MIT Director Hakan Fidan’s personal criticism of the MIT being bogged down with “domestic” matters. I was wrong.

The introduction of the draft bill states that it aims to bring the "MIT in line with the necessities of the era, grant it the capabilities of other intelligence agencies, and strengthen its methods and capacity for individual and technical intelligence." Several pro-AKP pundits make references to the CIA to defend the bill and position it as a step in the right direction. Is it? We need to first question the potential practical implications of the bill itself, and then also put it in the context of all other updated laws of Erdogan’s "advanced" democracy. This may help explain why many are referring to the Syrian mukhabarat state to explain the current situation in Turkey.

First, the MIT is still responsible for both domestic and international intelligence gathering and processing. Turkey does not have separate agencies such as in the United States, where the FBI pursues domestic intelligence and the CIA focuses on international matters. Similarly, in Israel, there is Shin Bet and the Mossad. The MIT argues that the complex geopolitical situation of Turkey requires all intelligence to be under one roof. But many of the “upgrades” in the bill concern the domestic realm. Let’s be honest, not many Turks are worried about the fact that MIT will now have the official right to carry “operations” abroad. Who would not want to have a national intelligence agency that is strong and effective all around the world? However, Articles 8-13 of the MIT bill are all about domestic matters. For instance, it calls for all organizations (government or private) to be required to cooperate with the MIT’s demands. Those that do not cooperate would be legally punished, while those that do would not be held legally accountable for the consequences of their cooperation. The blanket immunity, provided not only to all agency members but also to anyone who collaborates with them, is quite perplexing. To complete the circle, any prosecutor has to first provide information about possible cases to the MIT; if the agency says that all is fine and under their control, then there can be no case.

Why the AKP wants such a regulation for the MIT is another intriguing question, because just a year ago a new regulation was introduced stating that “any government employee on a mission assigned by the prime minister cannot be questioned without the permission of the prime minister.” Fidan was protected with the further clarification that he cannot be questioned without the permission of the prime minister. At every step of the way, two interrelated processes can be observed: First, it should be seriously questioned whether the "advanced" AKP democracy is following the principle of the separation of powers. Second, the oversight requirements should be revisited. Oversight is a much misunderstood concept in Turkey. How can one person — the prime minister in this case — nominate, appoint and approve the director of intelligence and also be his legal shield?

This is precisely why — when the news broke about a revision to the bill where the prime minister was not designated to lead the Intelligence Coordination Commission and the structure of the commission would be preserved as is — a friend asked, “What difference does that make anyway?” After all, we are talking about a prime minister who controls the subtitles of live news, even when he is out of the country. Does anyone really think there is a difference between him being the head of a commission or someone he exclusively appointed?

Moreover, Bulent Korucu, a journalist from Today's Zaman, argues that foreign companies would be deterred from investing in Turkey since the new regulation permits MIT to access all commercial data without due process. Another possible red flag is that all phone conversations of “foreigners” could be listened in on without any court authorization. Considering that there are millions of Turks with dual citizenship talking to regular Turks, who will be the foreigners falling under this regulation?

Given the heated battle between the Gulen movement and the AKP, now many Gulen movement pundits generate rumors that the truck-search affair was a setup by the MIT to prepare the grounds for this all-embracing law. This does not help the MIT.

Most of the social media chatter focuses on how — through this bill — the AKP aims to wipe out the Dec. 17 corruption scandal and keeps tabs on the police and prosecutors. All activity of the police force and prosecutors would be monitored by the MIT and the Telecommunications Authority working with the MIT. This comes as a result of the Internet censorship and law governing the independent Supreme Board of Judges and Prosecutors (HSYK) to bring it under government control. All this rushed legislation should be considered in its entirety to see the complete picture of the accelerated erosion of human dignity and freedoms for anyone on Turkish soil.

Another possible sore spot is the Turkish-Syrian border. The MIT bill legalizes dummy corporations formed by the agency. This point is vehemently defended by AKP members who say all other agencies such as the Mossad or the CIA have this right. Yes, they do. Intelligence agencies need secrecy to protect their country's national interest. Yet, the same methods of dummy corporations, fake names and IDs are also utilized by organized crime entities. The difference is that intelligence agencies are subject to strict oversight. That is to make sure they do not become a “state within a state” or a “deep state,” which Turkey has suffered from quite a bit in its recent history. Is it not worrisome that the MIT has power, both for domestic and international intelligence?

I am not sure whether fears of a spy state can be easily tempered; neither am I sure whether the men who contributed to the design of this law do not fear its repercussions after they leave office.

I agree with Fidan that the MIT needs organizational restructuring and fundamental reforms. Its desire to have the “capabilities of other intelligence agencies” is admirable — but just as a reminder, David Petraeus resigned as CIA director in the midst of an FBI investigation. I say this only because AKP pundits love to use the CIA as an example. Erdogan, who always avers “we act within the laws,” should remember that the laws he is trying to enact today will be there when he leaves office as well.