Is Turkey reverting to a 'muhaberat' state?

The Turkish prime minister's interference with the judiciary and a new intelligence bill could signal a return to a single-ruler era — the era of the "national chief." 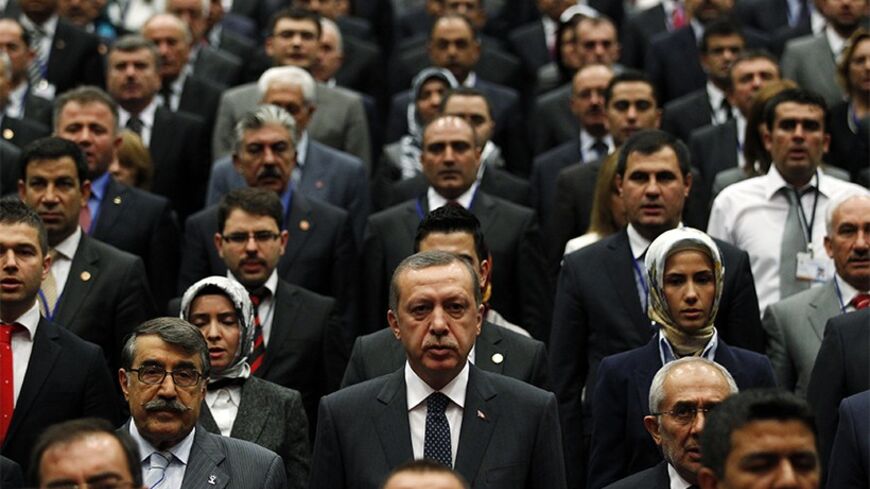 Is Turkey becoming an intelligence state? Is the country reverting to the era of the "supreme national chief"? These questions are frequently asked nowadays. Prime Minister Recep Tayyip Erdogan — who has not hesitated to punish judges, prosecutors and police who he accused of being part of a "parallel state" — now wants to increase his operational powers internally and abroad with a new National Intelligence Organization (MIT) law that would also reinforce his immunity. For the opposition, this is called a "muhaberat," or intelligence, state.

For Erdogan, courts that issue rulings compatible with the government’s stances are “patriotic,” but those not toeing the government line are “non-national.” Erdogan, who called the Constitutional Court “non-national” because it deemed the Twitter ban a violation of rights, admonished the court's president, Hasim Kilic, when the court annulled the law on the Supreme Board of Judges and Prosecutors (HSYK), saying, “Those who want to be in politics will take off their gowns and do it.”

The annulled law authorized the minister of justice to appoint and remove HSYK members in a manner infringing upon the freedom of the judiciary. In his latest instance of branding, Erdogan labeled the prosecutor who detained the policemen involved in stopping MIT trucks from going to Syria a "hero," but the judge who ordered their release was called a "traitor" and a "hashashin."

Erdogan said, "A patriotic prosecutor in Adana launched an investigation. Some suspects were detained. But soon, the people of the parallel structure intervened, and suspects were released. How can it be that suspects are released when there is treason? Some might have submitted to blackmail, and some might have overdosed on hashish.” ​Immediately thereafter, three prosecutors who authorized the truck operation were reassigned.

The process that provides Erdogan immunity rests on two pillars: the new tutelage order in judicial and security forces, and the monopolization of intelligence. Erdogan realized that by assigning MIT chief Hakan Fidan as state mediator in negotiations with the Kurdistan Workers Party (PKK) and making him operational abroad in arming the Syrian opposition, their guidance and training would get him in trouble with the law. To avoid charges of having “contacts with a terror organization,” Erdogan ruled that any investigation of the intelligence chief has to be approved by the prime minister, thus providing the intelligence chief a protective shield. This is how they prevented prosecutors from searching the suspicious trucks heading to Syria.

Now, both to reinforce the legal framework of this immunity and to make the MIT even more functional, Erdogan is creating a new order. It is obvious that Erdogan wants to task the MIT with new missions to monitor the local and international activities of the Gulen movement, which he has demonized as a “parallel structure.” The goal is to eliminate the movement. Anyhow, Burhan Kuzu, a Justice and Development Party (AKP) member and chairman of the Parliamentary Constitutional Commission, revealed the government's intentions with this tweet: "This week we will finish with the MIT law at the parliament. Then MIT will be able to carry out operations abroad and defend country’s national interests. When the MIT law is enacted, then the lairs of traitors inside and outside will be entered and what is necessary will be done."

What is new in the draft bill?

We understand from reports and statements that the Council of Ministers will henceforth be able to task MIT with missions. What constitutes the new MIT draft submitted to parliament?

Opposition: we are becoming a muhaberat state

Several criticisms have been voiced so far, including: While expanding the MIT’s powers, it is freed from oversight and gains immunity; it is becoming an instrument to preserve the government’s agenda and interests; the national monitoring center GES will be under the MIT’s control, enabling it to monitor all internal and external communications; and instead of being a surveillance organization, the MIT is becoming an operational organization.

In a parliamentary debate, Engin Altay, a senior member of the opposition Republican People’s Party’s (CHP), said the government is actually creating its own deep state. "The MIT has given up foreign intelligence and dedicates itself to saving Erdogan’s future,” he stated. Faruk Bal, an opposition parliamentarian of the Nationalist Action Party (MHP), said that with this law the MIT can ask for tanks, artillery, planes and missiles from the military and even launch foreign operations if it chooses. CHP parliamentarian Hursit Gunes said that unless the prime minister doesn't allow it, the MIT will become untouchable.

Deputy Prime Minister Besir Atalay responded to the criticisms by saying the MIT law was being updated as needed as a result of the demands of the time. He said its international functions are enhanced and the organization is becoming transparent. This change is necessary due to the MIT's role in the solution process with the Kurds.

The government’s defense was found inadequate outside of parliament as well. Professor Mehmet Altan said, "The more the prime minister strives to cover up corruption and bribery, the more pronounced is the progress to fascism. … To try to impose absolute silence via the MIT will cause major troubles. By transforming the MIT into a 'Gestapo' outfit authorized to stalk and suppress its own citizens will consolidate fascism and encourage more crimes by the government."

Former Minister of Justice Sakir Seker said, “The MIT is being made a core of oppression, power and threats. The purpose is to intimidate everyone who is against it. The MIT is about to become a feared terror organization. We are on the way to becoming a muhaberat state.”

In a conversation with journalists, President Abdullah Gul expressed unease with the MIT draft bill because he believes Turkey should strive for freedom-seeking policies, not security-based ones. Taking Gul’s reservations into account, parliament said it would propose a parliamentary commission authorized to supervise intelligence and security-related issues. Legal expert and journalist Ali Topuz assessed the situation for Al-Monitor, saying a US-style congressional oversight mechanism will not work in the Turkish parliament. "As long as you empower the oversight by parliament or the political rule, you are actually manufacturing a shield of impunity. In the United States, congressional oversight is working. Moreover, they haven’t eliminated judicial oversight," he said.

Topuz believes that the MIT draft bill, along with the attempted changes to the HSYK law that were overruled by the Constitutional Court and Erdogan’s defiance of the Constitutional Court, should be assessed as a package. Topuz said these events reflect the model in Erdogan’s head: “We are reverting to the first days of the Republic. The legal setup is heading in that direction. In those days, a single political party was the state. The president was the founder and the chairman of the party. He had absolute powers over the state bureaucracy and the party. It was actually a kind of sultan’s rule without succession by your offspring. Erdogan’s latest arrangements foresee to totally bypass parliament. He will be fully in charge of vital powers as we see in his approach to the MIT and HSYK. We didn’t have a constitutional court in the first years of the republic and now Erdogan expresses his discomfort with that body. That is how they made the Council of Administration totally dysfunctional. That body is dead.”

People are afraid of the practical applications of these new arrangements as much as their legal implications. The government’s tradition of finding legal covers to its actions is the true cause of this fear.