Alevis and Islamists react to the first TV series based on the MIT (Turkish National Intelligence Organizations). 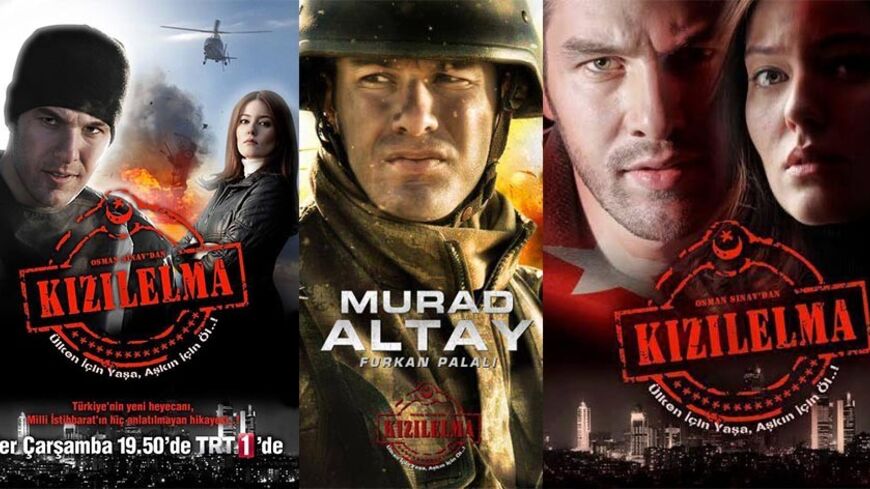 It was only a few years ago that serious Middle East experts were debating the ever-growing Turkish “soft power” in the region, measuring it with the increasing popularity of Turkish soap operas mostly in Muslim countries. Times have changed, but the TV series industry in Turkey remains lively. Turkish politicians are not shy to comment about the TV shows. “Magnificent Century,” a TV series inspired by the Ottoman Sultan “Suleiman the Magnificent” and his omnipotent wife Hurrem, was the latest show that glued millions of Turks to their sets. Turkish Prime Minister Recep Tayyip Erdogan criticized the show for disrespecting “our ancestors.” Did the sultan spend so much time with his harem or was he on horseback conquering infidel lands? was the intriguing question the public debated.

Turkish state TV, TRT, aired the first episode of a controversial show, dubbed “Kizil Elma” (Red Apple), on Jan. 15. The first scene was quite telling. Two Turkish conscripts on the Syria-Turkey border courageously attacked 200 armed men. These two soldiers do not inform their brigade or seek permission before engaging the well-armed, civilian-clothed “enemy.” They become instant heroes, making it onto the news. As the producer of the show, Osman Sinav informs us, the two soldiers are indeed one and a half men, for Murad Altay, or the Turkish James Bond, is the real man behind the action. His companion is a naive, uneducated, satirical character, who resembles Sancho Panza in Don Quixote. The Turkish James Bond (Murad) appears on the news, screaming the motto of the show: “Live for your country, die for your love!”

Just at this point, the Turkish National Intelligence Organization (MIT) enters into the picture. And this is the part that makes this show newsworthy. This is the first TV series that clearly uses the MIT name and focuses on the agency explicitly. An overweight, middle-aged, rather aggressive red-haired lady appears as the second-in-charge of MIT and she single-handedly recruits Murad from military service to the MIT. He becomes a MIT agent and government employee overnight. To be fair, Murad bargains with his new boss before accepting the offer and asks for a red '68 Mustang along with other nonmaterial incentives to join MIT. His boss accepts all the conditions and brings the Mustang, only to detonate the car after handing Murad the keys. The red-haired iron lady informs Murad never to act spoiled again! So if suspense is what you desire, the series surely promises violent surprises.

The producer of the show, Sinav, is no stranger to Turkish or foreign audiences, because his now 11-year-old TV series and movie “Valley of the Wolves” received perhaps as much attention from academia as from the entertainment world, a reflection of how ultranationalist feelings can be stroked through the film industry. Sinav explains that "Kizil Elma" is about “Turkey's goals” and “these goals are by 2023 being a regional power, by 2071 being a world power.” In his words, we see an alignment with AKP’s much reiterated objectives. One Twitter user asked, “Can MIT recover its image as collaborator of PKK (Kurdistan Workers Party) with folk songs and hot guys?” The Central Asian Turkic theme song seems to be the high point of the show so far.

Despite all the patriotic or ultranationalistic rhetoric, there has been no Kurdish reaction to the show. Intriguingly, the first criticism came from the Alevi community in the United Kingdom. The teaser for the show makes strong references to values and concepts sacred to Alevis. British Alevi Federation Chairman Israfil Erbil told Al-Monitor, “We consider it a serious offense to our religious beliefs any effort that portrays Alevis and the Alevi religion as part of a racist, ultranationalist approach.” Interestingly, when the producer and screenwriter were asked about the complaints of the Alevi community during a TV talk show, their replies onscreen then prompted a lawsuit from the UK Alevi Federation. The screenwriter and producer explained on live TV that they failed to understand why the Alevis were angry. Then the screenwriter said, “These people complaining are Alevis without Ali (cousin and son-in-law of the Prophet Muhammad), they are Alevis who fail to be Alevi.” Adding insult to injury with such comments on television, the show has recklessly ignored the Alevi community’s reaction and resentment. Another Alevi friend from Ankara told me over the phone, “We have so many resentments, but worst of all, it is arrogance with political might.” Indeed, it seems like a pattern that the more minorities in Turkey highlight what they consider to be offensive and hurtful to their beliefs, culture and norms, the more the mainstream rhetoric insists, “It is not offensive, this is the right way, deal with it.”

Alevis were not the only group disturbed by the TV series. Sema Karabiyik from the Yenisafak daily wrote, “Rather than power, the TV series underlies the vulnerabilities and ineffectiveness of the MIT.” In her rather candid critique, Karabiyik complains about the lack of intelligence, analysis or ability to process or gather information of the intelligence service portrayed in the show and says, “It is focused on the main character’s love for violence.” Karabiyik concludes that the show, so far, has failed to project an agency that could inspire public confidence. As Yenisafak is known as a conservative and pro-AKP daily, this opinion piece should be taken seriously.

Upon reading it, I spoke with several pro-AKP, Islamist friends who voiced resentment about the show. One of them argued the show was not Islamist at all, and that it was made for nationalist “white Turks.” Indeed, the main character of “Kizil Elma,” unlike the rough and rugged agent of “Valley of the Wolves,” is a more rounded and elegant character. Yet, he is not representing the “West.” Unlike Bond, he does not enjoy an occasional martini or socialize with attractive women, but still the show has failed to meet the standards of Turkish Islamists so far. Some have argued Murad is indeed  an imitation of Jack Ryan, the famous Tom Clancy character. It should be noted that no female agents have been used as seductresses so far for Turkish national interests, either. I have observed, just as has Erdogan, that Islamist friends tend to forget that it is only fiction, after all. Even a TV show highlights the deep divisions in Turkish society. Pro-AKP Turks don’t enjoy the show because it is not Islamist enough, while the opposition argues that the show is just another gimmick funded by government to justify the MIT’s “outlaw” behavior and unaccountable operations.

The MIT’s reputation with the Turkish public has traditionally been rather low. Being associated with the MIT was not a sign of prestige by any means. This started to change once Hakan Fidan took over at the agency in May 2010. Fidan, for better or worse, improved the MIT’s overall image; therefore, a TV series focusing on the MIT at this time could be a step in the right direction. It would put a human face on a secretive agency. Currently, the show has been a success in the ratings and the first episode has had more than 200,000 viewers just on YouTube. If it can keep up its popularity, one hopes the show would strengthen public confidence in the MIT, while not alienating minorities in Turkey or contributing to xenophobia.