A deadly assault by the Islamic State on a regime-held gas field in Homs province marks a new chapter in Syria's civil war as government forces and Islamic State face off. 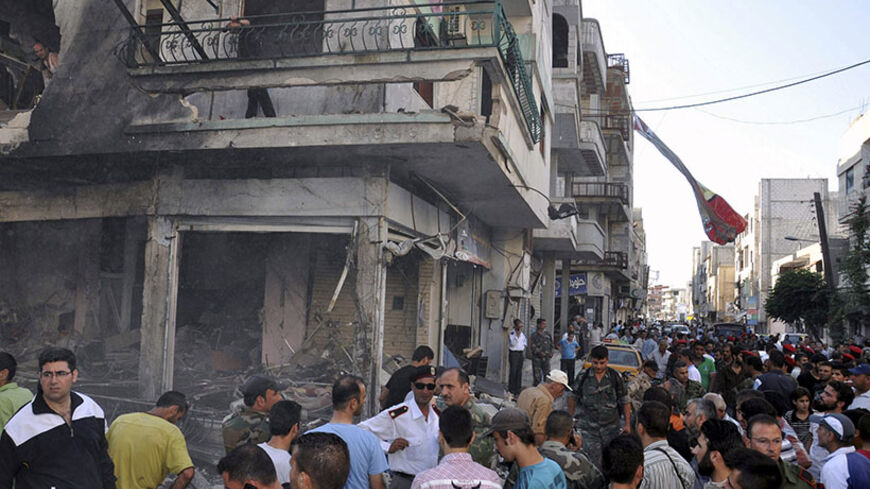 ALEPPO, Syria — The Islamic State (IS), arguably the most dangerous and brutal terrorist group in modern history, now controls more than a third of Syria, according to the Syrian Observatory for Human Rights, a prominent opposition nongovernmental organization. The group’s stunning victories in Iraq have been repeated in Syria, though to a lesser extent and to even less media attention. IS now controls nearly all of the oil-rich eastern province of Deir ez-Zor, with regime forces controlling only a few pockets. Crucially, after ousting its rival, the al-Qaeda-affiliated Jabhat al-Nusra, from the provincial capital, IS is now face to face with regime forces, the two sitting opposite one another on the front lines that divide this largely devastated city.

The undeclared truce between the regime and IS seems to have run its course after both sides achieved all they could in their marriage of convenience. Nothing better illustrates this than the devastating assault launched by IS on the al-Shaer gas field in Homs on July 16 that may have left up to 300 regime troops and civilian employees dead. Meanwhile, the regime continues to launch airstrikes on IS headquarters and training camps in Raqqa, an indication that the gloves are now definitely off.

As IS consolidated its grip on Deir ez-Zor, after a humiliating rout of Jabhat al-Nusra that saw its leader, Safwan al-Hant, captured and killed July 14 while trying to escape disguised as a woman — his own men having reportedly turned him over after defecting — it quickly turned its expansionist intentions elsewhere. IS has also resurfaced in rebel-controlled areas near Damascus, including the Yarmouk Palestinian refugee camp, and threatens to derail fragile and painstakingly negotiated local cease-fires and agreements.

It is also launching its own campaign in Ghouta against the Islamic Front, headed by the Saudi-backed Jaish al-Islam, whose leader, Zahran Alloush, said that fighting IS is more important than fighting the regime.

IS has not yet attacked regime positions in Aleppo. It is likely waiting for an opportune moment — either after the regime roots out rebels or when it has other fronts under control and can send substantial reinforcements. It is guaranteed, however, that a confrontation is coming soon.

First Lt. Majed, an officer in the Syrian army who has been stationed in Aleppo for a while, spoke with Al-Monitor about the imminent showdown between the regime and IS. “We are ready for them, and we are prepared. We have some of our best military units now in Aleppo that have specifically been trained to combat them and have experience with the tactics they use. And of course, we have our friends, too,” he added with a smile, meaning Hezbollah and Iraqi militias.

The Syrian regime will find in IS a much tougher opponent than the rebel factions it has been fighting. IS fighters are well trained, well armed, ideologically motivated and disciplined — a far cry from some of the ragtag, corrupt and chronically undersupplied militias the Syrian army had previously faced. That IS could make short work of some of the toughest rebel groups on the ground, including Jabhat al-Nusra and the Islamic Front, must have the regime worried, at least insofar as it would mean even heavier reliance on already overstretched elite foreign troops and militias.

Aleppo remains a prized target for IS, as it would provide the group contiguity of the territory under its control, which stretches across Raqqa and Deir ez-Zor right into Iraq, as well as an enormous cache of financial and human resources. IS has also been engaged in fierce battles with the Kurdish enclaves in the north, as it attempts to wrest control of the strategic border regions. Kobani, in Aleppo province, seems to be firmly fixed in its sights as the group begins its slow sweep from the east.

When asked about a time frame for victory, the Syrian lieutenant was vague. “No one knows. It could be months or years, but we are committed. It’s either us or them. You have seen what those dogs did to people in Iraq. They will do the same here. We won’t allow it,” he said. Majed was referring to the ethnic cleansing and pogroms against religious groups in Iraq, mostly Shiites and Christians, something that would strike a nerve with Majed, as he is a member of the Alawite sect, the Shiite offshoot to which President Bashar al-Assad and many high-ranking regime military and civilian officials also belong.

The lieutenant said that he expected the IS battle in Aleppo “very soon” and that IS would find it tougher going in Aleppo due to the lack of support for the group and the many opponents it faces in the area. “Here it is easier [for the regime's fighters] than in the east. Here IS has less support, and more enemies. They have Kurds to contend with, as well as other local groups opposed to them. We will drive them out of here soon, just after we finish with the other terrorists [local rebels].”

The Syrian regime had always used “terrorists” as a blanket term with which to label any who oppose it. It now seems that the regime's version of reality will come true. Indeed, the only forces left fighting against it will be Islamic extremists. If, however, the fortunes of IS continue, the regime might discover that it has bitten off more than it can chew.