The current escalation in the Gaza Strip could have been avoided had Israel truly agreed to the two-state solution, thus nullifying the political force of Hamas and its desire to hurt Israel at any cost. 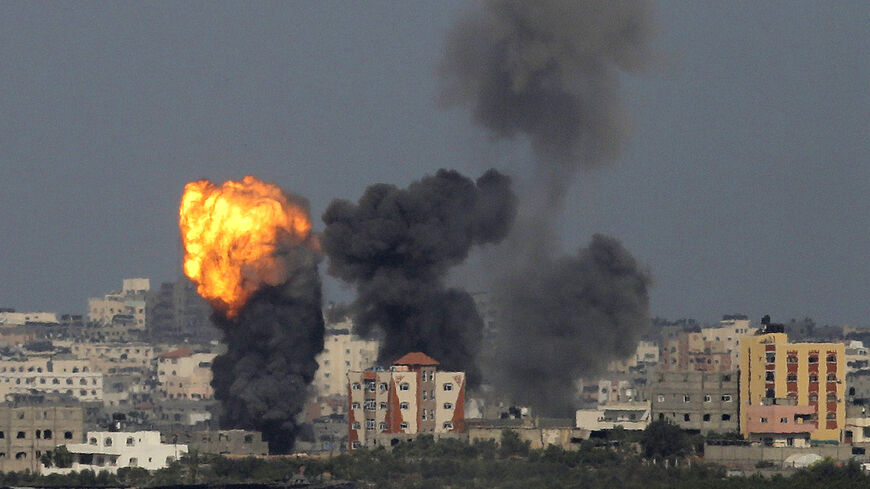 An explosion is seen in the northern Gaza Strip after an Israeli airstrike, July 13, 2014. Israeli naval commandos clashed with Hamas militants in a raid on the coast of the Gaza Strip on Sunday, in what appeared to be the first ground assault of a six-day Israeli offensive on the territory aimed at stopping Palestinian rocket fire. - REUTERS/Ammar Awad

Why is the Hamas leadership determined to engage in a war that it has as much chance of winning as a fly has against an elephant? To really understand what its leaders are thinking, it helps to know the Arabic term "mumanaa," which freely translates as a "no win-no win situation." For years, the strategy of Hamas (and of Hezbollah, for that matter) hasn’t been based on achieving a Palestinian victory. Rather, it is focused on preventing Israel from winning.

For this mumanaa to be complete, Hamas takes care to maintain a residual military capacity, which will allow it to have the last word, and prevent Israel from gaining a decisive victory. In other words, the movement’s leaders will do everything within their power to ensure that Gaza fires off the last rockets before a cease-fire is declared. If Israel decides to invade Gaza, Hamas will force it to engage in grueling skirmishes in densely populated areas, in what can best be defined as a mini “war of attrition.” After all, Hamas is fully aware that a single photo of an Israeli soldier’s funeral is worth more than a thousand words about “victory.”

The result is an asymmetrical struggle between an organization that has nothing to lose and a desperate population, versus a country without enough room on the page to list all of its losses. Below is just a partial tally of Israel’s losses in this conflict:

If there is one thing that the Israeli government can chalk up as a major victory, it is the battle over the media and Israeli public opinion. People in Israel and around the world constantly hear the claim, “No country would have acted any differently if its citizens were subjected to a barrage of missile fire night and day.” How true! If the armies of neighboring countries like Egypt, Jordan or Syria had bombed Israel’s cities, it wouldn’t be Israel’s “right” to respond with all-out war — it would be Israel’s duty. On the other hand, the number of times that news commentators remind us (or remember, for that matter) that rockets fired at Israel originate in territories that Israel occupies can be counted on one hand.

During hundreds of hours of discussion of this war on radio and television alike, the Israeli public has not heard that the Oslo Accord determines that the West Bank and the Gaza Strip constitute a single Palestinian political entity, just like the Negev and the Galilee are part of a single Israeli entity. It is obvious to Israelis that the Jewish residents of the Galilee identify with the suffering of their Jewish brothers and sisters in the Negev. But when the Palestinian residents of the Galilee identify with their brothers and sisters in Gaza, they are considered traitors.

In the same spirit of thinking, Israeli citizens — and not just the settlers — empathized with the families of the three teens who met such a brutal death solely because they were Jews. They felt rage at the people, from whom the murderers emerged. But Israelis don’t always grasp that Palestinians in Gaza empathize with the family of the boy burned alive solely because he was an Arab. And again, Israelis sometimes don’t get that the Palestinians are furious at the people from whom the murderers sprung.

The Israeli public hardly heard anything of the political context of the crisis. On the eve of the last crisis, Hamas was forced to follow Fatah’s lead and grant Palestinian President Mahmoud Abbas the authority to negotiate on the basis of the Arab League’s peace initiative. Were it not for Prime Minister Benjamin Netanyahu’s refusal to freeze the settlements during the negotiations and to translate his announcement that he supports a two-state solution into a viable map, Hamas would be a political deadweight. A diplomatic arrangement can still pull public support out from under it and expose it as serving non-Palestinian interests. At the same time, diplomatic progress would grant the Israeli military greater freedom of action by providing it with Arab and international legitimacy.

How unfortunate then that once again Israel is falling into the trap set for it by Hamas and allowing it to exit the conflict with a stalemate. That result is considered a resounding victory by the path of violence over the path of peace.