The IDF is now worried not only about escalating tensions on the Syrian and Lebanese borders but also about growing tensions along the border with the Gaza Strip. 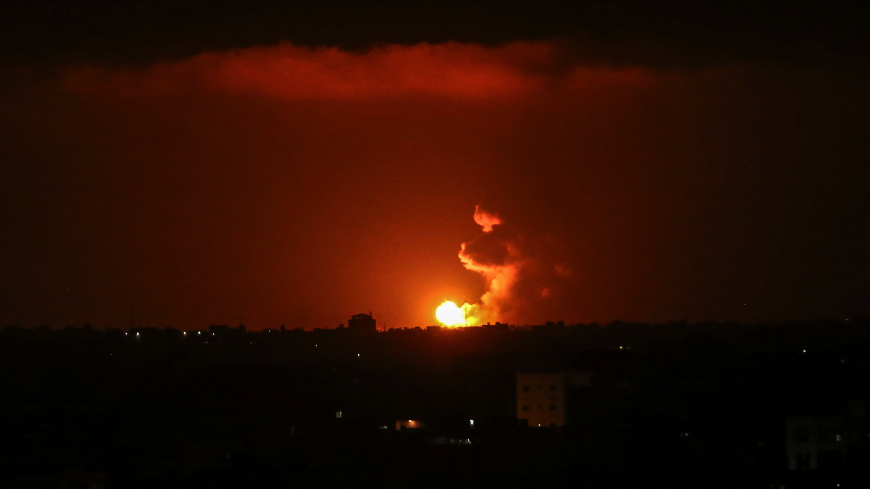 A ball of fire is seen following an Israel airstrike at Khan Yunis in the southern Gaza Strip early on June 27, 2020. Two rockets were fired from the Hamas-controlled Gaza Strip towards Israeli territory on June 26, the army said. - SAID KHATIB/AFP via Getty Images

The last time Israel’s south was hit was on July 5, when Gaza assailants fired three rockets into Israel. In response, the Israel Defense Fores (IDF) then bombed a number of Hamas targets in the Gaza Strip. But after almost a month of relative quiet on that front, the situation is now evolving. Israel’s security system must currently focus not only on its northern borders but also on the south.

As a reminder, on June 20, Hezbollah operative Ali Kamel Mohsen Jawad was killed in an airstrike outside Damascus. The group blamed Israel for the attack and vowed to retaliate. Since then, tensions on Israel’s borders with Syria and Lebanon have intensified, with Israel deploying additional forces in the Galilee.

The most recent incident took place on Aug. 2. IDF troops foiled an attempt by an unidentified group to place bombs along the border with Syria. The troops spotted the group during the night when it tried to plant explosives along the border fence and opened fire. Four assailants were apparently hit. The IDF said it was too soon to say if the group belonged to any organization but emphasized that Israel held "the Syrian regime accountable." Still, Israel fears that following the failed operation, Hezbollah will try to launch another attack on Israeli soldiers.

While this incident kept unfolding in the north, another incident took place in the south. A rocket was fired from the Gaza Strip toward the south of Israel, without any group taking responsibility for the launch. The rocket set off sirens in the southern town of Sderot as well as in the Sha'ar HaNegev Regional Council, sending thousands of Israelis into bomb shelters. The attack came as Sderot inaugurated a new coronavirus-fit drive-in movie theater, with dozens of cars full of people watching the first film. The IDF reported later that the Iron Dome missile defense system intercepted the rocket and no injuries were registered. Only one vehicle was damaged by shrapnel following the rocket interception near the Gaza border.

Retaliating for the rocket, Israeli warplanes hit several Hamas targets in central and southern Gaza Strip. The IDF said the targets included a cement factory used in the construction of underground infrastructure and underground facilities allegedly used by Hamas.

Earlier today, Israel’s State Comptroller Matanyahu Engelman published a report on the situation of bomb shelters across the country. According to the report, nearly 30% of Israeli citizens do not have access to functioning shelters near their homes, including over a quarter of a million people who live near the borders with the Gaza Strip in the south and with Lebanon in the north. More so, 2,494 out of 12,601 existing shelters would not offer proper protection in the case of an attack.

In preparation for escalation on either front, an American cargo plane carrying US military Oshkosh trucks is expected to land in Israel tonight. According to the Defense Ministry, these trucks will be fitted with Iron Dome batteries to be deployed across the country.