Israeli Prime Minister Benjamin Netanyahu knows that terror attacks by Hamas right before the March 2 elections could cost him his job. 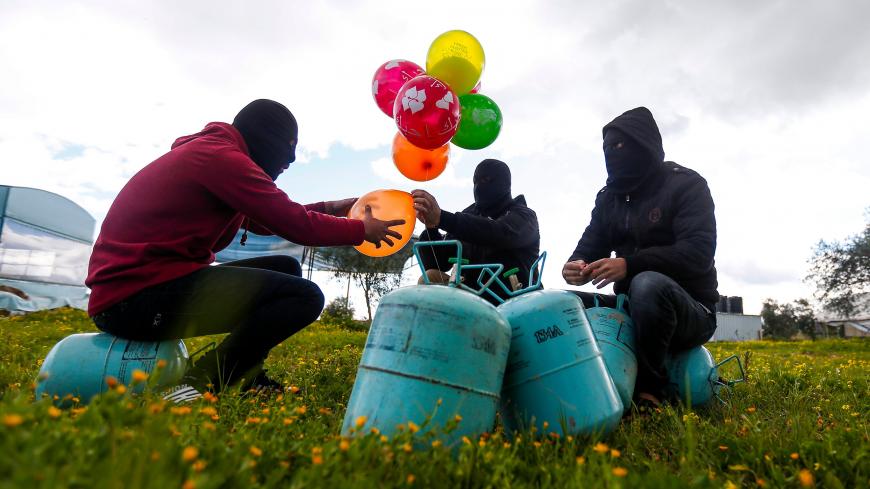 Masked Palestinians prepare to attach balloons to a gas canister before releasing it near Gaza's Bureij refugee camp, along the Israel-Gaza border fence, Feb. 10, 2020.

One multiple casualty terror attack in the southern coastal city of Ashkelon on the eve of the March 2 elections for the 23rd Knesset could determine the nature of Israel’s next government. One photo of an Israeli killed in a Gaza Strip border community is "worth" more than the thousand words of praise that Prime Minister Benjamin Netanyahu has heaped on himself since the unveiling of US President Donald Trump’s “deal of the century” for Israeli-Palestinian peace. One siren warning of incoming rockets from Gaza into the town of Ashdod will keep more Likud party voters home on election day than the number of those wowed by Netanyahu’s Moscow operation last month to bring home Naama Issachar, the young Israeli jailed in Russia on drug charges whom he freed after intense pressure on Russian President Vladimir Putin. Indeed, not only are the lives and deaths of Israelis in the hands of the Palestinians launching rockets and explosive balloons into Israel, but Hamas and Islamic Jihad have a decisive impact on the makeup of Israel’s next government.

Both political blocs in Israel are familiar with Israeli sensitivities over deadly terror attacks. Acting Prime Minister Shimon Peres attributed his Labor party’s loss of the elections for the 12th Knesset to an Oct. 30, 1988, terror attack on the outskirts of Jericho in which a mother and her three children were burned to death. Many in the Likud were convinced that a terrorist who stabbed to death a 15-year-old girl in the suburban Tel Aviv town of Bat Yam on May 24, 1992, a month before the elections, restored Labor to power. Suicide attacks contributed to Labor’s downfall and Netanyahu’s victory in the 1996 elections more than any other factor.

Hamas plays a pivotal role in the current election campaign as well, in which one Knesset seat could determine who is given the mandate to form Israel’s next government. This time it is the Likud under Netanyahu that is at the mercy of the organization controlling the Gaza Strip.

Hamas, for its part, is well versed in the rules of Israel’s political game. It knows that every incendiary balloon launched toward the Negev region on the eve of elections raises Netanyahu’s interest in a long-term cease-fire deal, which Israelis euphemistically dub an “arrangement.” The prime minister would do well to practice maximum restraint on the Gaza front. His political fate, and perhaps his personal one, too, hangs on the string of a balloon.

The Gaza visit of an Egyptian mediation team on Feb. 10, after a five-month cutoff between Hamas and Cairo, does not seem to have been a coincidence. The Palestinian Al-Quds newspaper reported that following the delegation’s visits to Israel and Gaza, the Palestinian factions reached understandings on suspending explosive balloon launches into Israeli territory. Judging by past experience, this hiatus will not last long. This was made clear in a wide-ranging Feb. 5 interview by Al-Quds with senior Hamas official Khaled Meshaal. “As the one running things in the Gaza Strip, the goal of the organization is to breach the siege of Gaza in order to provide residents with minimal needs for their existence so that our people in Gaza can continue the struggle alongside our people in the West Bank and Jerusalem,” he said. Meshaal, who speaks more freely now that he no longer heads the Hamas political bureau, stressed that the “arrangement” under discussion between the sides reflects a situation of mutual deterrence between well-to-do Israel and impoverished Hamas.

In an interview this week with Al-Monitor, Palestinian affairs expert professor Mati Steinberg said that while Israel and the United States seek to turn the divide between the Gaza Strip and the West Bank into a permanent strategic situation, Hamas sees the arrangement merely as a springboard to control the West Bank. The arrangement deal, he said, is a Trojan horse completely contradictory to the premise of the Trump plan that Israel enthusiastically embraced. “We’re seeing one of two things,” he noted. “Either ignorance and poor understanding are at play here, or we are facing a sophisticated plot to present a plan and empty it of all content at the same time so that it cannot be implemented or provide an excuse for failure to implement it.”

Whatever happens on March 2, the situation on the Gaza front the following day will likely remain the same as it has been over the past decade, if not worse. The deal of the century distanced prospects of Israeli-Palestinian peace and further poisoned relations between Israel’s Jewish citizens to their Arab neighbors. Nonetheless, it could have historic repercussions. “The Swiss cheese plan” — so nicknamed for the Palestinian enclaves separated by Israeli-controlled territory that are to constitute a future Palestinian state under the plan — has already succeeded in narrowing ideological differences between the Hamas and Fatah movements. At the same time, it blurred the difference between the two major factions competing in the upcoming Israeli elections — the right-wing Likud and centrist Blue and White.

If the response by Blue and White party leader Benny Gantz to the Trump plan — by accepting it — and his campaign speeches are any indication, a change in regime will not dramatically alter Israel’s strategy on the Gaza Strip. Speaking with Gaza border community leaders on Feb. 10, Gantz presented two options for resolving the festering problem: a deal that includes the return of the remains of Israelis and soldiers held by Hamas or “a military defeat.” A third option — resolving the conflict within the framework of a permanent agreement with the Palestinian Ramallah leadership based on the understandings reached in 2008 between then-Prime Minister Ehud Olmert and Palestinian President Mahmoud Abbas — was never mentioned. Nothing, nada.

The good news is that unlike Blue and White’s new election slogan — “We must progress” — Gantz has walked back the promise he made during the previous election campaign in 2019 “to blast the entire front with fire” and to launch a ground offensive on the Gaza Strip during the next round of fighting. These days he is no longer pledging to “strive for a military defeat of Hamas and dismantle all the systems arrayed against us.”

If news bulletins on election day are disrupted by blaring rocket warning sirens, few if any will remember these promises. The macho threat Netanyahu issued Feb. 9, "We won’t accept any aggression from Gaza," will probably not send Likud voters in droves to the polling stations.