Israel's marginalization of Palestinians, continued settlement activities and challenges to Jordanian and Palestinian sovereignty of the Al-Aqsa Mosque/Temple Mount area are fueling unrest in East Jerusalem. 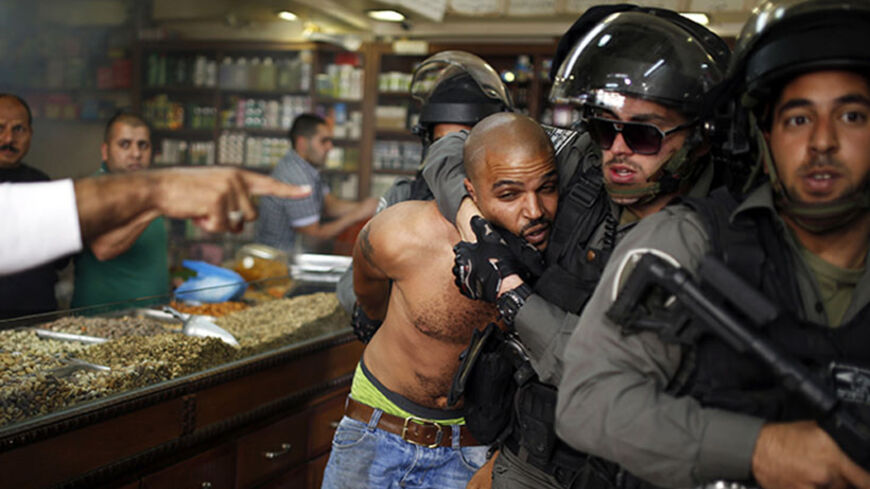 An Israeli border policeman detains a Palestinian protester during clashes ahead of Land Day in East Jerusalem, March 29, 2014. - REUTERS\Amir Cohen

The Palestinian film director had no idea that her production was a security threat. Emtiaz al-Moghrabi had produced a film — "Noor" (Light) — about the problem of drug abuse among the youth of East Jerusalem. The documentary, which was screened in Ramallah and other Palestinian cities, was to be shown in East Jerusalem on the eve of the International Day against Drug Abuse and Illicit Trafficking on June 26. A local educational institute, Dar al Tifl, was chosen as the venue and the event was promoted as part of the local community’s campaign against drug abuse.

The screening never took place. Israeli police arrived at the location half an hour before it was to start with an order signed by the Israeli interior minister banning the event.

Film censorship has been practically unenforced in Israel for years. The order states that the film may not be shown anywhere in Israel without prior permission. This is not the first time Israel has banned an event that poses no security threat to deny the Palestinian Authority (PA) a say in what happens in East Jerusalem. Last year, the Palestinian National Theater was closed for a week because it had organized a Palestinian children’s puppet festival that was supported with funding from Europe through the PA.

These incidents show how far the Israelis will go to isolate Palestinians in East Jerusalem from their Palestinian connections. This isolation has done the city’s Palestinians terrible psychological as well as physical damage. The Association for Civil Rights in Israel reported in a May 2012 study that 78% of Palestinians living in East Jerusalem and 84% of the children there live below the poverty line — among the worst poverty rates anywhere. The report also says that Palestinians are only able to build on 17% of their land and that 90,000 live behind the concrete wall Israel built. Over 14,000 have had their Jerusalem residency revoked by the Israeli Interior Ministry in what Palestinians consider a form of ethnic cleansing.

The Israeli government added insult to injury this week by approving a budget of 295 million shekels (roughly $88 million) over five years to boost socioeconomic development in Jerusalem, one-third of which will be spent on security, for things such as cameras and checkpoints. The money was justified as increasing Israeli control over East Jerusalem

It is against this background that the July 2 killing of Muhammad Hussein Abu Khdeir, 16, from the East Jerusalem's Shuafat neighborhood needs to be seen. The city, with a 40% dropout rate among high school students, was traumatized by the killing of Khdeir and the lucky escape of another child.

East Jerusalem has been the birthplace of many rounds of violence. The second intifada was triggered in the fall of 2000 after Israeli troops used live bullets and killed scores of Palestinians protesting the provocative visit by the leader of the Israeli opposition at the time, Ariel Sharon.

Tensions have also been exacerbated in the Old City of Jerusalem in the past two years with the rise of the far-right in the Israeli government and Knesset. A major focus of these groups is to remove the symbolic Palestinian/Jordanian sovereignty over Al-Aqsa Mosque, the third most important mosque in Islam. Jewish groups with heavy military protection are escorted almost daily into the mosque compound without coordination with Islamic authorities or respect to the Muslim faithful. There have been attempts to change the status quo made in the Knesset, but these have been rebuffed as a result of strong Jordanian intervention. Article 9 of the Jordan-Israel peace treaty reserves a special status for the Hashemite Kingdom of Jordan in the affairs of the Islamic holy places in Jerusalem.

Shifting the violence from Hebron to East Jerusalem will most certainly work to the advantage of radicals on all sides. The conditions of despair, economic retardation and constant political pressure to be isolated from Palestine will surely increase the chances for violence and demonstrations to last much longer than anyone wishes.

The absence of a political horizon and the physical and psychological separation imposed by Israel on the 360,000 Palestinians of East Jerusalem is very frustrating and plays into the hands of political radicals and criminal elements. The spiral of violence can’t be tackled simply by more tear gas and Israeli public diplomacy. A serious political process is essential to tackle the root cause of the conflict. Nowhere is this needed more than in Jerusalem.