Lebanon’s Maronite Patriarch Bechara al-Rai has proposed an initiative to allow a president to be elected with only an absolute majority of the vote. 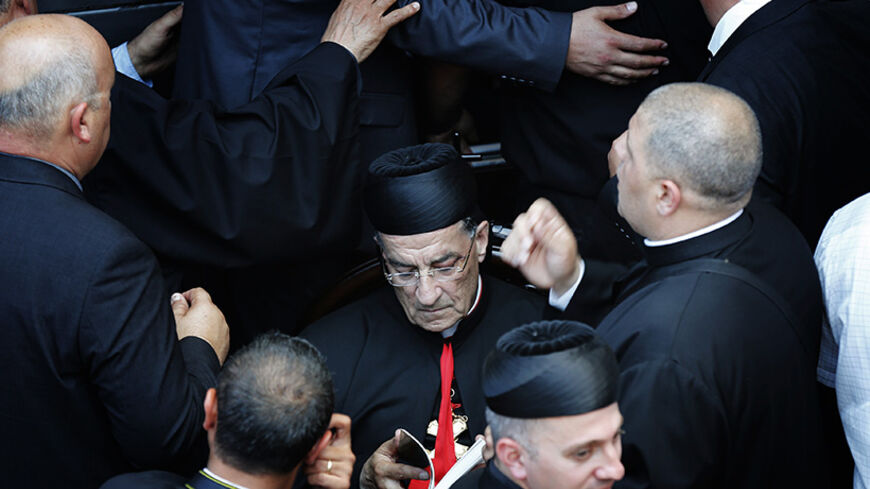 Maronite Patriarch Bechara al-Rai reads as he is surrounded by security personnel during his visit to Birim, May 28, 2014. - REUTERS/Finbarr O'Reilly

The ninth session to elect a president for the Lebanese Republic failed on July 23 to convene for lack of a quorum. The date marked two months of presidential vacuum. Domestic and international efforts have led to a settlement that would bring Lebanon back on track.

Resorting to governmental institutions is no longer the way to solve disputes, but one more cause of conflict.

According to information obtained by Al-Monitor, Maronite Patriarch Bechara al-Rai, who was the first to object to the presidential vacuum and has never missed a chance to call on the members of parliament to fulfill their missions and elect a president, is ready to change the rules of the game. Rai would endorse the election of a president with only an absolute majority of the vote in a plan known as the Bkerke initiative.

Rai’s current position as mediator between the Lebanese political parties might save the republic, since they failed to get through the crisis.

This idea's rationale considers the first session, held May 25, when a two-thirds quorum was present. Article 75 of the Lebanese Constitution stipulates, “The chamber meeting to elect the president of the republic shall be considered an electoral body and not a legislative assembly. It must proceed immediately, without discussion of any other act, to elect the head of the state."

It's noteworthy that Article 49 states that an absolute majority is sufficient to elect a president.

The March 8 Coalition might object to this initiative, since it states that the two-thirds quorum is essential for every electoral session. Based on this explanation of Article 49, the March 8 Coalition justifies disabling the elections by blocking the two-thirds quorum. The coalition defends its actions based on a previous event when former Maronite Patriarch Mar Nasrallah Boutros Sfeir insisted on electing former President Emile Lahoud's successor with a two-thirds majority in fall 2007.

However, things are different today from 2007. First, the two-thirds quorum was not present in the first session, as it was on May 25. Second, as a legal expert close to Sfeir explained, “The purpose of Sfeir’s demand of the two-thirds majority was to get over the disablement of the work of the governmental institutions back then, through having the conflicting coalitions — March 8 and March 14 — agree on one president.”

However, today, this logic has been reversed and the demand of the two-thirds quorum became a way to void the elections, since it gives any minority that has one-third of the members the power to disable the sessions. Going ahead with the elections with the half plus one reinforces the participation and democratic competition dynamic, and it liberates the elections and the work of the institutions.

Former deputy Samir Frangieh talked about the disabling third that is now a court under the name of consensus democracy, first proposed by Hezbollah when it pulled out the Shiite deputies as an objection to the government’s endorsement of the special tribunal to sentence late Prime Minister Rafik Hariri's killers. Frangieh, a key figure in the March 14 group, who contributed previously in drafting the Taif Agreement, told Al-Monitor, “It is true that the constitution mentions the necessity of two-thirds of the vote for some decisions, but it never granted a 'third' to any single sect.”

The question that remains today is whether the Bkerke initiative will be given a chance. Or will the patriarch wait for the right local and regional circumstances surrounding it to propose it, so it does not turn into another subject of debate?

Former Prime Minister Saad Hariri’s six-point initiative — which chiefly calls for imminent presidential elections, Hezbollah's withdrawal from Syria and for an economic recovery road map — converges with the patriarch's efforts and gives some hope of a breakthrough. The Sunni leader urged the political establishment to speed up the election of a president before the parliamentary elections scheduled for the fall. The late proposal — more precisely, proceeding to presidential elections before parliamentary ones — is contradictory to that of Free Patriotic Movement leader Michel Aoun, who's calling for the election of parliament first. It was no surprise that Rai fully endorsed Hariri’s initiative, stressing the importance of moderates and moderation. It is quite likely that the two men — Rai and Hariri — coordinated their position, pushing for the election of a consensus president and getting the institutions back on track.

It's no secret that the president’s election is no longer under strict Lebanese control, but is now subject to regional negotiations, exactly like the formation of the Iraqi government, the negotiations between the Syrian regime and the opposition or even the cease-fire agreement in the Gaza Strip.

All these issues are as many cards on the negotiation table that confront Iran with the West and to its Arab neighbors. Electing a president in Lebanon is more than ever subject to a deal with Iran and its counterparts.

The importance of the Bkerke initiative and Hariri’s proposal is that together they are building a momentum that could lead to a breakthrough when the regional agenda opens up.