Lebanon has been without a president for over a year now, and the current international pressure to hold elections is not going over well with the country's term-extending parliament. 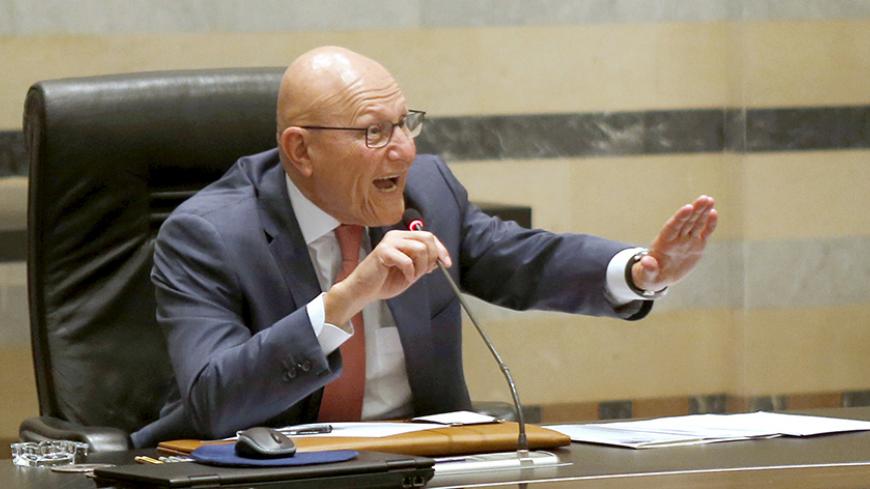 Lebanon's Prime Minister Tammam Salam gestures as he argues during a Cabinet meeting in the Grand Saray in Beirut, Lebanon, July 9, 2015. - REUTERS/Mohamed Azakir

BEIRUT — Facing international pressure to elect a new president for Lebanon, some political parties in Beirut are suspicious of what they call a dubious request.

These political parties are requesting, first and foremost, that parliamentary elections be held. They seem assured of their stance from a legal and constitutional standpoint. They also seem certain that the confrontation between their own demands and the international ones to elect a president will end up favoring their side and Lebanon will resist caving to international pressure.

The source continued, “Under the current circumstances, there is a huge legal imbalance in this equation. … The legal mandate of the current parliament expired more than two years ago, specifically since June 20, 2013. The parliament did not continue its duties in this abnormal situation because the Lebanese people re-elected it, but rather because most of these parliament members decided to extend their own term for four full years under the pretext that the security situation in the country does not allow holding new parliamentary elections. This is how the public legitimacy of the current parliament was challenged. Moreover, the presidential vacuum happened after the end of the parliament’s term. When the Lebanese people elected the current parliamentarians, they were not tasked with electing a president. Their public and representative mandate did not allow them to elect a president, as their parliamentary term was supposed to end on June 20, 2013. The election of a new president was scheduled to take place on March or May 25, 2014, according to the constitution. Therefore, parliamentary elections should precede presidential elections and as per democratic logic, parliament members whose term has ended shouldn’t be voting for a president. The priority is to hold parliamentary elections that renew the Lebanese parliament and grant its new members legitimate constitutional power to elect a new president for the republic.”

Why are the large Christian parliamentary blocs now suspicious of the international pressure to elect a president? The official said, “The [Christian] bloc is afraid of the open-ended foreign interests in the Syrian crisis, to say the least, or the collusion of foreign parties, to say the most, in the issue of Syrian refugees and their ongoing displacement into Lebanese territory. The primary Christian group [the bloc headed by Gen. Michel Aoun] in Lebanon is afraid of plans that aim to settle the war in Syria while disregarding the remaining Syrian refugees in Lebanon or dismissing the return of those people to Syria as nonessential. This would result in a crisis, with the presence of more than 1 million Syrian refugees in a country whose population amounts to 4 million people, with a surface area of only 10,452 square kilometers [4,035.5 square miles].”

He noted, “Electing a president who does not have clear public legitimacy and direct, strong parliamentary representation might exacerbate international pressure in the issue of refugees. This is dangerous for the Lebanese country and government.”

Why does this bloc seem so assured of its ability to face the pressure? The source answered, “It is a matter of simple math. The bloc and its allies have more than a third of parliamentary seats in the current self-extending parliament. This is constitutionally sufficient to forbid any session to elect a president. The Lebanese Constitution states that two-thirds of the MPs should be present for a quorum to be complete in order to elect a president. The MPs of the bloc and their allies have been preventing the completion of the quorum since the presidential vacuum on May 25, 2014, to circumvent presidential elections and head to parliamentary ones first.”

And what if international pressure increases? The source answered, “We will keep facing the pressure until Europe backs down,” adding, “Tehran will not put any pressure on Hezbollah to push its parliament members to relinquish their supporting stance for the largest Christian bloc. This is a constant. Moscow also supports the largest Christian bloc’s demand, which prioritizes the parliamentary over the presidential elections. Even Paris has started to tone down its encouragement for presidential elections. France is mulling over delaying [President] Francois Hollande’s visit to Beirut, which was mentioned a few days ago and was supposed to take place end of September. This indicates that Europeans have realized their inability to demand the election of a new president.”

Nevertheless, the source admitted that the bloc is currently unable to fulfill its demand and head to parliamentary elections for the time being. The current standstill will persist until further notice.