Lebanese parliamentarians fail to consider the consequences of extending their terms of office. 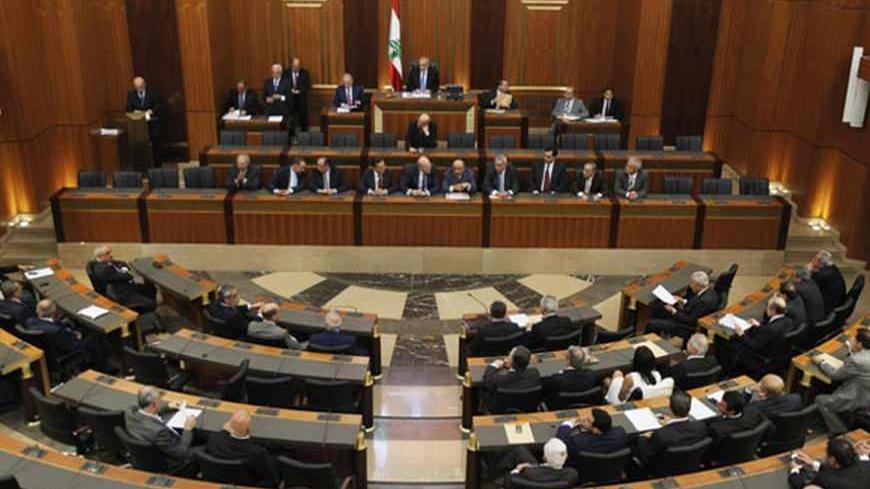 Lebanese members of parliament attend a session in Beirut, May 31, 2013. - REUTERS/Mohamed Azakir

It was remarkable to see Lebanese MPs last Friday [May 31], trying to sneak into parliament in downtown Beirut, either through side roads leading to alternate entrances to the building, or disguised by their use of “non-official” vehicles without the famous blue-colored license plates reserved for Lebanese MPs’ cars.

The reason behind this subterfuge was their need to attend a legislative session dedicated to the adoption of one single item: the extension for an additional 17 months of their four-year term, which ends on June 20. This move angered a number of pro-democracy activists who gathered at the entrance to parliament and pelted each arriving MP voting for the extension with a barrage of tomatoes, eggs and water.

The issue does not merely revolve around a democratic principle worth defending, nor is it the consequence of an inability to agree on a new electoral law that would govern upcoming elections. In fact, it seems to go beyond such matters as can be seen in the following observations made at the time when the extension vote was held:

First, the Lebanese MPs, in their explanation of the so-called “reasons” that “necessitated” the extension of their term, said that a “force majeure” prevented the holding of elections; namely, the deteriorating “security situation” in a number of Lebanese areas. They invoked this reason to guarantee that their vote not be overturned by the Lebanese Constitutional Council, which is a supreme constitutional judicial body endowed with the authority to scrutinize laws adopted by parliament. Any legal or administrative reason used to justify the extension would have been rejected by the Constitutional Council and the law overturned; but evaluating security conditions and determining the level of imminent danger faced by citizens, theoretically and by discretion, falls on the executive branch that the Constitutional Council has no powers over.

But this excuse was scandalously exposed as a farce by the behavior of MPs, who were seen exiting parliament laughing loudly, after having just informed their constituents that an imminent danger threatened the whole country.

However, the most dangerous aspect of this matter was its psychological effect and impact upon the dynamics of Lebanese society, the general national sentiment and the country’s economic outlook. This is because mere mention of extending the term of parliament brings back memories of the Lebanese civil war; the only time in the history of the country when its regime failed to conduct legislative elections, leading parliament to extend its own term. This aberrant situation continued from 1976 until 1992, when the first post-war elections were held, after the Syrian army tightened its grip over Lebanon.

Therefore, what the MPs who voted in favor of the extension failed to realize was that their actions put the Lebanese people in a true state-of-war mind-set. And following the ethnic clashes that occurred in some regions of the north, the cancelation of elections was all that the Lebanese needed to mentally, emotionally and psychologically relive the civil war, prior to this war actually manifesting itself on the ground and clashes flaring between newly formed front lines.

Second, it was striking that 97 out of 128 MPs voted to extend their term, with the parliamentary bloc of Christian leader Michel Aoun boycotting the proceedings. They extended the parliament’s term for 17 months — ending on Nov. 20, 2014 — while the term in office of the current president, Michel Suleiman, ends on May 25, 2014. This means that, pursuant to the constitution, the same parliament that failed to conduct legislative elections and extended its own term, must now elect a new Lebanese president between March 25 and April 25 of next year. In effect, this forewarns the need for Lebanon to prepare itself for a presidential vacuum in one year’s time; for how can MPs who failed to conduct their own legislative elections be capable of electing a new president unless the coming year was characterized by decisive events capable of changing the internal balance of power on the Lebanese scene?

Third, and in the same context, it was also noteworthy that Lebanese MPs carefully chose the extension period, as several proposals were put forth, among them an extension for six months or a year. Yet, they effectively chose to remain parliamentarians for an additional 17 months until after the end of Syrian President Bashar al-Assad’s mandate in June 2014. It was as if Lebanese MPs, by so doing, wanted to acknowledge that the situation in Lebanon was directly linked to the situation in Syria, and that they were incapable of running the affairs of their own country while they awaited developments to occur in Damascus, so that they may be able to adjust to them accordingly in Beirut. In itself, this is a very negative inference about the country’s ability to rule itself, and therefore its right to free itself from any form of tutelage, as some in the international community have grown accustomed to dealing with.

Fourth, the irony remains that Lebanon, which conducted its first pluralist legislative elections over 70 years ago, has now become incapable of holding such elections. Meanwhile, some countries of the region that never knew any elections in their histories are now witnessing unprecedented elections — such as Egypt, Tunisia, Libya, Yemen and others. This is despite the heavy bloodshed that accompanied these events in a number of those countries, where voting was viewed as detrimental to stability.

These nascent democracies therefore chose the ballot box despite threats of violence. Yet, Lebanon failed to do so, its failure seeming twofold even: For it discarded the ballot box but has not, thus far, avoided the threat of violence escalating. This is a grave sign that carries serious implications, particularly at a time when the whole region seems to have entered a phase predicated on redrawing its nations’ borders, re-evaluating legitimacy as states and the extent to which they each deserve to be a viable and stable nation.

Did Lebanon’s MPs take this into consideration when they extended their term? Their wry, post-session, lazy and confident laughs definitely indicated otherwise.