Will Lebanon’s municipal elections lead to election of a president?

The May municipal elections in Lebanon prove that long-delayed parliamentary elections can indeed be conducted and a president of the republic selected. 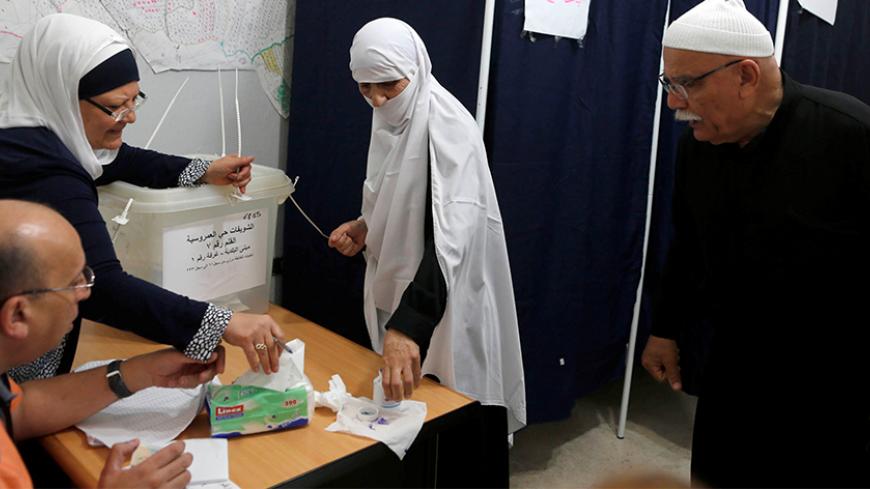 A woman dips her finger in ink after casting her vote at a polling station during Choueifat's municipal elections, south of Beirut, May 15, 2016. - REUTERS/Mohamed Azakir

Unlike Jacques Chirac of France, Mahmoud Ahmadinejad of Iran, Recep Tayyip Erdogan of Turkey, Ehud Olmert of Israel and other presidents, no head of a municipality in Lebanon has moved on to a senior-level national government position, let alone the presidency. Today, more than two years into the Lebanese presidential void, could the recent municipal elections ironically lead to the election of a president of the republic.

Between May 8 and May 29, Lebanon conducted four phase municipal elections that engaged Lebanese voters in some 1,015 municipalities, in cities, towns and villages. This figure alone explains the intense mobilization surrounding the elections, which included more than 30,000 candidates. Further heightening mobilization efforts was that the elections were held almost three years after the cancellation of parliamentary elections and the parliament’s extension of its mandate as its term ended in June 2013. Longing to cast their votes amid the mobilization generated by the municipal elections, the Lebanese turned the implications of this milestone into indicators that cannot be overlooked: that it is possible to hold elections in Lebanon today and that the traditional parties and forces face a crisis among their popular bases.

The May balloting dispatched with the political and security pretexts, mainly spillover from the Syrian war, that some members of parliament — including those affiliated with the Future Movement, Amal and Hezbollah — had invoked in seeking to cancel two consecutive, mandated parliamentary elections. None of the pretexts were convincing or accurate. What’s more, some legal experts argue that merely holding municipal elections has effectively in a legal, constitutional sense made the case behind the extension of the current parliament invalid.

Ziad Baroud, the former interior minister and a lawyer competent in electoral and constitutional law, told Al-Monitor, “When the parliament extended its own term a second time [on Nov. 5, 2014], the members of parliament who were against the extension — mainly parliamentarians from the Change and Reform Bloc — challenged the decision before the Constitutional Council of Lebanon, which is the highest judicial authority authorized to decide on the constitutionality of laws. On Nov. 28 of that same year, the Constitutional Council issued a decision whereby the extension of the parliament’s term could occur as government authorities thought that holding elections would not be possible in Lebanon amid the security situation prevailing at the time [mainly because of the Syrian war].

According to Baroud, the mere holding of municipal elections in May means the extension of the parliament has now become null and void, so the government should hold parliamentary elections without delay. The current parliamentary term, based on the second extension, ends on June 20, 2017.

Some municipal election results caught the major parties and movements by surprise, indicating that they all have fallen somewhat from favor with the public. The Future Movement, which represents the Sunni majority and is led by former Prime Minister Saad Hariri, was shocked by the low turnout in its strongholds, namely, Beirut, Sidon and the western Bekaa Valley. The movement suffered a resounding defeat in Tripoli and some other northern municipalities.

The allied Hezbollah and Amal, which represent the Shiite majority, were surprised by the opposition they ran into in their traditional strongholds. Some 35% of voters in the south and some 45% of voters in Baalbek, in the Bekaa Valley, did not vote for them. A similar fate fell on the Druze camp led by Walid Jumblatt as well as Christian forces.

In the wake of successfully held municipal elections showing that parliamentary elections are possible and the unexpected results pointing to the major parties being in crisis, the issue now becomes whether politicians will try to overcome the current impasse by electing a new president, a move that would reshuffle the political cards and give the partisan forces a chance to catch their breath and regain some of their lost popularity.

Michel Aoun, the leader of Lebanon's Free Patriotic Movement, told Al-Monitor that this is likely to happen. “A lot of indicators infer such a trend,” he said, without providing details. Aoun is the most popular Christian leader and the most prominent candidate for the presidency. His parliamentary bloc is the largest Christian bloc. The other Christian bloc, the Lebanese Forces, also recently supported his candidacy.

Is a date for a presidential election in sight? It is Ramadan, and Muslims in Beirut are fasting. Everyone will have to wait until the second half of July to find out whether the end of the Muslim fast will be accompanied by an end to the Lebanese presidential void. The election of a president requires a two-thirds majority of parliament, that is, 86 members of parliament out of the 128 total. Since the seats are divided equally between Muslims and Christians — each having 64 — the Muslim parliamentarians' presence and participation in the parliamentary session for the election of a Christian president is necessary to achieve a quorum and proceed with a vote.