Jordan has blocked a number of independent news websites, raising concerns over its commitment to a free media environment. 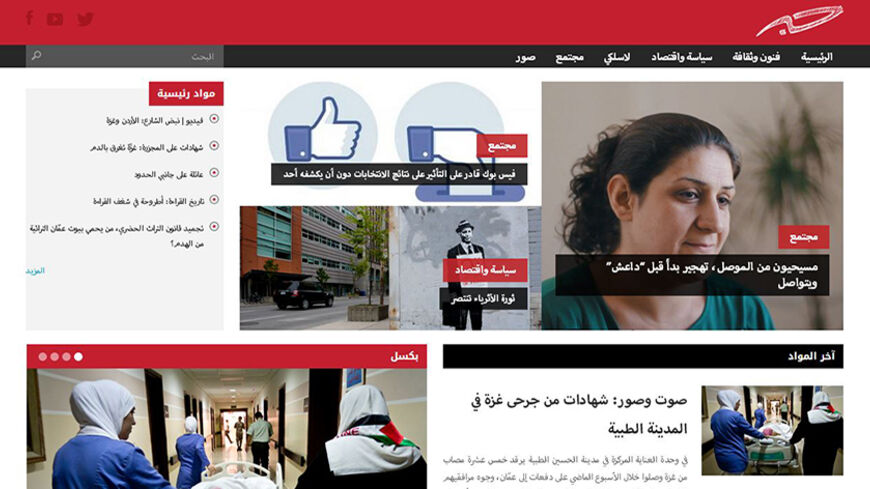 AMMAN, Jordan — The Jordanian government has increased pressure on the local press by blocking nine more news sites, including the popular 7iber, after it failed to obtain an appropriate license from the country’s Media Commission.

“Preventing local media [from reporting] while leaving the door open to other sources of media is totally lacking intelligence,” Jordanian Parliament member Rola Al-Hroob told Al-Monitor. “It is also harming our international reputation and is in violation of our international commitments.”

Basil Okoor, editor-in-chief of JO 24, one of the prominent news sites targeted by the Jordanian government, explained to Al-Monitor the risks of writing about sensitive topics such as the security services or government corruption. “It is very dangerous. It is like working in a minefield. If you go too far in one direction, it will explode in your face. You will be sent to jail and the military court.”

Okoor pointed to the extended jailing in September 2013 of two Jaffra news site journalists, Nidal al-Faraaneh and Amjad Mu’ala, who agreed early on to register with the government, as further intimidation against publishing articles critical of the regime. A judicial official said that Faraaneh and Mu’ala were “accused of posting a video that that offends Sheikh Jasim bin Hamad al-Thani. They were charged with carrying out acts that the government does not approve of and that would expose Jordan and its citizens to the risk of acts of aggression.” The video discusses an alleged sex scandal between a Qatari official and an Israeli woman.

One of the harshest parts of the new press regulation is that the publisher and editor-in-chief can be held liable for the content of the comments sections, even though readers — and not journalists — write them. This led Okoor to abolish comments on his site a year ago on political topics even though they were important forums for open debate.

While some websites have caved to governmental pressure and obtained licenses, others, including 7iber, have refused. 7iber reported that the demand for licensing is problematic, noting that the outlet already registered with the Ministry of Trade and Industry as a limited liability company. However, the Jordanian authorities recently discovered its new web address and blocked the site in June for a second time. With 7iber changing its site name again, this cat-and-mouse game persists. Protesting the need for licensing, 7iber’s editor-in-chief Lina Ejeilat writes, “How could it be that in the digital age of self-publishing, social media and citizen journalism, you have to get government permission to publish online?”

In addition to clamping down on the Jordanian press, the security services arrested 12 employees of the Iraqi Al-Abasiya TV station based in Amman on June 6, including station owner Haroun Mohammed. One staff member, who insisted that his name not be used due to the sensitive nature of this topic, told Al-Monitor during the night of the arrest, “Fifteen policemen came to our channel’s office, pointing guns to our heads. In the interrogation, the police kicked us while forcing us to stand on one foot.” The official noted that the police also arrested an Iraqi friend of one employee, even though he was not an Al-Abasiya staff member.

Especially disconcerting was that the journalists were charged with “terrorism” offenses and “using the Internet to carry out acts that would expose Jordanians to acts of aggression.” Under Jordan’s anti-terrorism laws, the suspects could face up to five years in prison if convicted. Al-Abasiya’s website was down at the time of this writing.

Defending the need for news sites to obtain a license, Minister of Media Affairs Mohammed Momani told Al-Monitor that similarly to print media, “Electronic newspapers must be regulated and organized since it is an industry.” Claiming to speak in the best interests of the news sites, Momani said, “There is a need to protect the journalism profession from intruders who practice blackmail.”

Yet, many activists both within Jordan and abroad reject Momani’s assessment. Director of the Middle-East desk at Reporters Without Borders Soazig Dollet told Al-Monitor, “If there should be a license, it should be given not by the government but rather by an independent and transparent body, which is not the case in Jordan.” She added, “The government will only accept websites that please their own agenda.”

Jordan’s 2014 overall press rankings dropped seven places to 141st worldwide, according to Reporters Without Borders, with the website blockings playing a significant role.

Dollet also noted the difficulty of licensing even for sites that attempt to comply with the regulations. Eight of the websites that were blocked a few weeks ago tried to register with the authorities, but were eventually rejected by the country’s Media Commission.

Also, the requirement for news sites to find an editor-in-chief who has been a member of the Jordanian Press Association for a minimum of four years is a cumbersome task. Okoor explained that many sites are forced to hire a symbolic editor-in-chief who fulfills these criteria, a burdensome cost for sites already in a precarious economic position. Until recently, the JPA, not an independent body, only accepted members from the print media. Therefore, it is difficult for websites to find staff.

“The traditional press in Jordan is considered to be tightly controlled by the government and there is a high level of self-censorship from the journalists and editor-in-chief,” said Dollet. This only increases the need for independent news sites in Jordan, especially covering sensitive topics that the mainstream press will not analyze.

At a meeting with the International Press Institute, Jordanian Prime Minister Abdullah Ensour exclaimed that Jordan had “come a long way” in improving press freedoms. Yet, for the owners of the blocked websites and jailed journalists, such a glowing government description of progress could not feel further from the truth.