A new media licensing law has caused a blackout among independent news sites in Jordan. 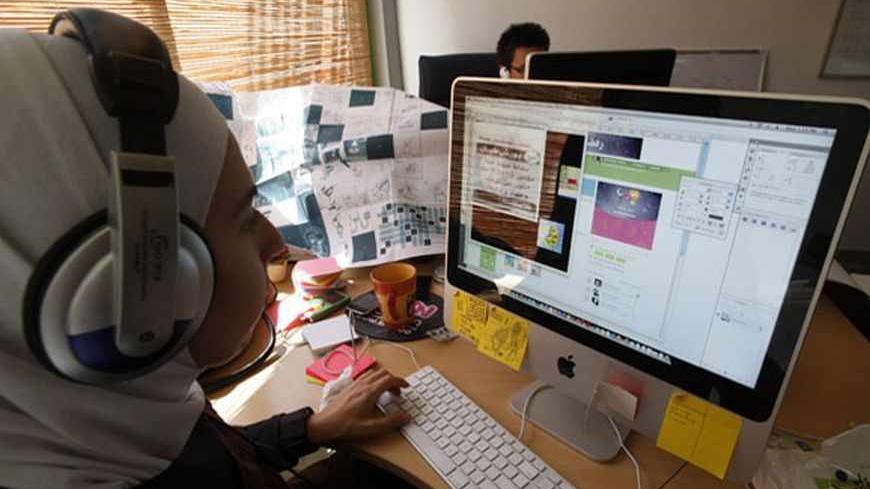 A Jordanian woman looks at a Jordanian website, Talasim, at an office in Amman, Sept. 30, 2009. - REUTERS/Ali Jarekji

In a surprise move only two weeks after promises to the contrary, the Jordanian government ordered three local Internet service providers to shut down nearly 300 news websites that have not been licensed by the government-run Press and Publications Department.

The decision ordered midday June 2 followed 10 months of promises by the government and the royal court that the controversial law ordering the owners of any website that deals with news and commentary about Jordan to be licensed. The order does not include web giants such as Facebook, Twitter, Google or Yahoo.

The controversy over the press and publications law began when the Fayez Tarawneh government de facto rejected a media strategy prepared by a royal-appointed committee under the government that preceded him. The national media strategy said that the optimum way to deal with the mushrooming of news websites was to train, self-regulate and create a website registry. The idea of a registry was meant to overcome situations where victims are unable to identify the owners of websites that were publishing slander. Owners of websites welcomed the recommendations but the government did not, leading to the resignation of the committee’s head former editor of Al-Arab Al-Yawm and government spokesman Taher Udwan. Independent-minded Udwan was replaced by pro-government spokesman Samih Mayta. The Tarawneh government pressed parliament into amending the press and publications law to demand that sites with news about Jordan must be licensed, must have an editor from the country’s closed-shop journalist union and both owners and editors must be responsible for all content including web comments. The law was railroaded in parliament. At one time, parliament Speaker Abdel Karim Dughmi headed the parliament’s national guidance subcommittee to ensure it quickly cleared the committee.

Fall 2012 turned into a major protest by owners of news websites. A coalition was quickly developed, a protest tent was set up and website owners declared an electronic civil disobedience vowing not to accept the governmental licensing scheme.

When reformist Abdullah Ensour was asked to lead a government that would supervise free and fair parliamentary elections, website owners breathed a sigh of relief. Ensour who had voted against the law visited the protesters and promised to resolve the problem in the spirit of cooperation and goodwill; the tent was removed and website owners patiently awaited news of the withdrawal or the amendment of the controversial law. Nothing happened, but the holding of an international conference in Amman in mid-May gave website owners hope. Speaking at the opening session of the 62nd congress of the Vienna-based International Press Institute, Ensour reiterated that no website has been blocked and that the issue will be resolved through dialogue with all parties to the issue. Princess Rym Ali, a member of the royal family and a media educator, addressed the international forum saying that she endorses the idea of a multi-stakeholder approach to the problem. She spoke following a session in which a professor from Hong Kong said that China had thought of a licensing scheme and had decided against it because of worry that it would not work. Sources in the palace also echoed similar cooperative approaches to the problem.

But in early June something happened that reversed the trend. No one knows exactly what caused the Jordanian government and palace to fundamentally change their approach. Riots in the southern city of Maan included people passing around a video that was damning to local security. Jordan was also approaching a self-imposed deadline to the International Monetary Fund at the end of June to raise electricity fees. Some analysts have said that these issues brought worry to Jordanian decision-makers, and therefore sourced the rushed decision of “enforcing the law” by blocking nearly 300 sites. The number of sites announced by the press and publications department has varied between 263 and 302. Some sites were unblocked for various reasons — either for having been mistakenly blocked or having obtained a license.

The reaction to the blocking was swift. Locally, 82 (out of 150) parliamentarians signed a petition demanding the immediate unblocking of the sites for six months to allow for a change of the controversial law. Various local human rights groups issued statements, and journalists and members of the Jordan Press Association protested. Regionally, two nongovernmental organizations, the Beirut-based Skyes and the Doha Media Center for Media Freedom issued strong statements. Human Rights Watch demanded an immediate unblocking of the sites. The International Press Institute issued a strong statement saying that the decision violates Jordan’s constitution which states that censorship is not allowed. Other international organizations such as the Committee to Protect Journalists, Article 19 and IFEX also issued strong statements.

In Jordan, the blocking of so many sites produced an interesting result. Tech-friendly geeks created customized applications to allow Jordanians to bypass the blockade creating a situation where Jordanians have followed what was learnt by Saudis, Tunisians and Syrians as they circumvented their government’s attempts to muzzle the world wide web.

It's unclear which way the standoff will eventually be resolved. Besides the parliamentary moves and the protests, some website owners are considering approaching the problem legally, insisting that the actions of the government are in violation of local law and international treaties which Jordan has signed to and have therefore become valid in the country.

*Disclaimer: Daoud Kuttab is the founder of one of the blocked sites, ammannet.net.