The close and strengthening ties between the Islamic State and the Caucasus Emirate mean growing security headaches for Russia and the United States, and provide a compelling reason to coordinate their responses. 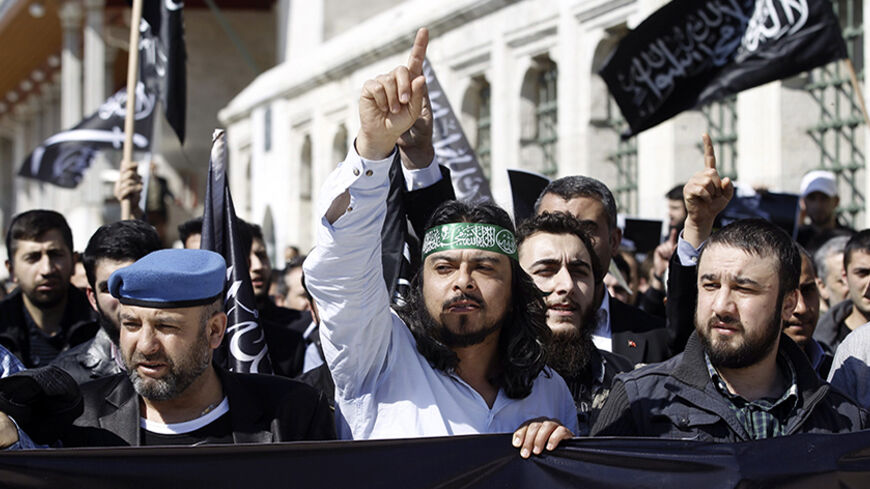 Pro-Islamist protesters shout slogans against the Russian government during a demonstration following the death of North Caucasus rebel leader Doku Umarov, at the courtyard of Fatih Mosque in Istanbul, March 21, 2014. - REUTERS/Osman Orsal

In Russia, the alarming success of the Islamic State (IS), formerly the Islamic State of Iraq and al-Sham (ISIS), was lamented by many analysts and policymakers as, by and large, an indication of a short-sighted US policy under President George W. Bush leading to a virtual breakup of Iraq. In the current context of perpetual Washington-Moscow browbeating, this narrative finds Moscow supporters in the Middle East and elsewhere. However, Russians have enough to worry about for themselves as IS not only has significantly influenced regional geopolitics, but has served as inspiration for extremist sympathizers in other parts of the world, breathing new life into their activities, such as for the Caucasus Emirate (CE) operating in the Russian North Caucasus.

Currently, North Caucasus mujahedeen are split in their support for various Islamist groups operating in the greater Middle East — partly over personal loyalties to groups’ leaders and emirs, partly over ideological imperatives, interpretation of the “global jihad” idea and its tactical implementation. In the spat between Jabhat al-Nusra and ISIS, the emirate signaled its support for the latter, further solidifying channels linking the two extremist groups. As Thomas de Waal of the Carnegie Endowment for International Peace argues, “Many of the leading jihadists of ISIS come from the Caucasus, including Omar al-Shishani, (an ethnic Chechen) who comes from Georgia's Pankisi Gorge. If even a fraction of the vast amounts of money ISIS is said to have seized in Iraq makes a way back to the North Caucasus, it could boost the militants there.”

However, the focus on the ethnic belonging of the mujahedeen (Chechens, Circassians, Dagestani) in this case has a rather emotional component: The strategic agenda of both the Islamic State and Caucasus Emirate is religious, not ethnic, which makes them more consolidated in substance and diverse in form.

Nevertheless, the people factor is the first “bridge” between the radical groups. Indeed, many of those fighting for IS (or al-Nusra, for that matter) first joined the jihadist movement in the North Caucasus and have been reported fighting in Chechnya, Afghanistan, Iraq and other hotbeds across the Middle East. This comes as no surprise, for in the age of globalization not only can terrorism be a global threat, but terrorists themselves are “globalized” and “travel to hot spots for specific missions” as tourists do to popular destinations. There aren’t training camps in the North Caucasus the size of those in Iraq and Syria; thus the competition for human resources is strong within and between the terrorist networks.

There are other obvious similarities: both IS and the CE operate in “gray zones” of their respective territories, and are united in their agenda of seeking to establish a caliphate or other extreme form of Sharia-based state entity. They may differ in organization and fundraising philosophy, but the truth of the matter is that the CE is a regional group that claims to be a part of “the global jihadist movement” while IS positions itself as its centerpiece and a new, major, driving force. In this respect, paradoxically as it may sound, it is IS that needs more of the Caucasus Emirate's support in competing with its ideological rivals (Jabhat al-Nusra and the like) over influence on the global umma.

Another linking chain is financial support: In December 2013, ISIS acknowledged receiving funds and fighters from then-leader of the CE Dokku Umarov, who has since been presumed dead. The “you-scratch-my-back-I’ll-scratch-yours” approach between the IS and CE could possibly be a feasible deal now that the former looks more powerful than it did some time ago. If that happens, the arches of instability in the Greater Middle East and Eurasia will coalesce and be a much bigger headache for responsible powers — namely, Russia and the United States.

Nowadays, it’s been conventional wisdom that Moscow and Washington have hit the historical bottom in their relationship since the end of the Cold War. But perhaps one of the most pragmatic takeaways from the IS surge for US-Russia relations is that in the context of “limited partnership” (at best) they should be more cooperative in the area of fighting extremist ideologies.

No one should be disillusioned: The two countries pursue different tactical goals and would face long odds to achieve a full-scale cooperation. But the level of mutual “geopolitical mistrust” is lower than it has been in the post-Soviet space, existing conflicts don’t have to do with an “ideological struggle,” the issue is not aggravated by the Ukraine-style informational tug-of-war and both Russia and the United States recognize the Caucasus Emirate and IS as critical threats to their national security.

The IS victory is a clear boost for the Caucasus Emirate — both in terms of prospective financial support and training of fighters — and a new challenge to Russian and US interests in the respective regions. Therefore, though the window of opportunity for a pragmatic cooperation in this field is narrow, it is real and worth considering.