The proliferation of independent media organizations in Iraqi Kurdistan in the early 2000s is reversing as political parties invest heavily in media outlets while intimidating independent journalists. 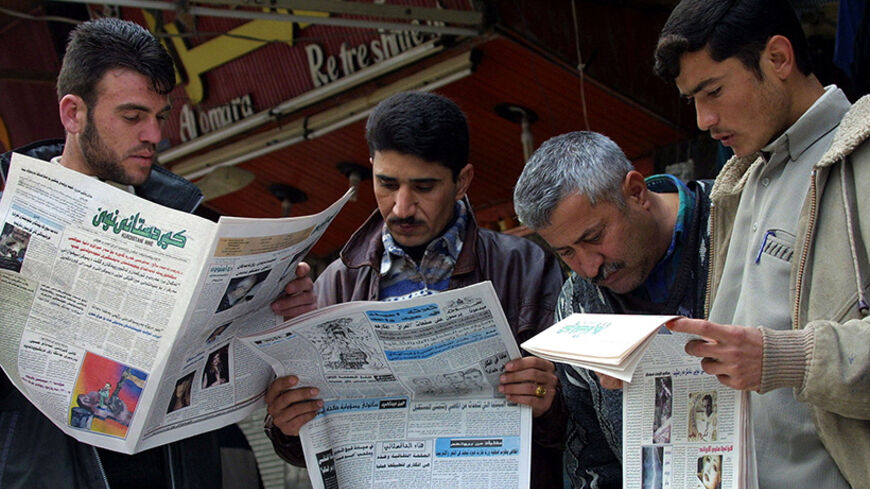 ERBIL, Iraq — The independent media, one of the essential elements of Iraqi Kurdish democracy, is experiencing its worst days since its emergence in 2000. As private media outlets — especially satellite TV stations — proliferate, independent sources are being squeezed out of the picture.

The changing political and socioeconomic dynamics in the Kurdistan Region of Iraq have added tension to the conflicts among political parties. After the emergence in 2000 of Daily Hawlati, the first free Kurdish media outlet, the Kurdistan Democratic Party (KDP) and the Patriotic Union of Kurdistan (PUK) began establishing a number of media outlets to undermine the independent media. These outlets are widely referred to as the "shadow media," as they claim to be independent but are subservient to their respective political parties.

Independent media, nevertheless, continued to flourish with outlets such as the weekly Awene and Lvin magazine. Many analysts believe that the opposition party Gorran would not have emerged in the 2009 elections without the assistance of Iraqi Kurdistan's strong independent media.

Alarmed by their weakening grip on information, regional authorities moved to stifle independent media with force and intimidation. In 2008, Lvin reporter Soran Mama Hama was killed by unknown armed men for writing critically on the political situation in Iraqi Kurdistan. Independent journalists received death threats for reporting on corruption and other topics the authorities would rather ignore. In 2010, Sardasht Osman was killed for satirizing the political situation. Kawa Germyani was murdered outside Sulaimaniyah late last year after extensively documenting corruption in PUK territory.

In 2011, Kurdistan's independent media entered a new era. NRT, a free satellite TV station, was founded in Sulaimaniyah by Shaswar Abdulwahid, CEO of Nalia Company. NRT was set on fire by armed men only 72 hours after its official launch.

Shwan Muhammad, editor-in-chief of SpeeMedia, a new free biweekly, said the decline of independent media is one of the greatest threats to Kurdish democracy.

"The free media revolutionized during the first decade of the 21st century, but entering the second decade, it has been challenged by emerging digital media, in particular new satellite TV stations that are funded by political parties. Unfortunately, free media has not been able to compete with them due to a lack of any economic resources," he told Al-Monitor.

Muhammad still believes that an independent media is the only hope for Iraqi Kurdistan's democracy.

Sirwan Najm, a newsagent in Erbil, said sales figures for independent newspapers are dropping by the day. He told Al-Monitor, "Before, I'd sell 300-400 copies of every issue of an [independent] newspaper, but now I hardly sell 15."

Najm explained the reasons for the decline: "The KDP and PUK created many newspapers to undermine the free media. And they printed everything without any reliability. This has negatively affected the reputation of free media as well because readers have lost their trust in media in general."

Despite the fact that independent media outlets, former opposition TV stations and the Kurdistan Regional Government (KRG) itself are facing financial crises, another pro-KDP satellite TV station is opening. Kurdistan 24 will soon start broadcasting, and sources state that it will be funded by KRG head Massoud Barzani's son Masrour Barzani, reportedly in response to Nechirvan Barzani's Rudaw Network, which strongly promotes Nechirvan's policies. The PUK also opened Kurdsat News, a new satellite TV station in response to Rudaw, in March.

Sardar Muhammad, the editor-in-chief of Awene who was recently listed as one of the #100InformationHeroes by Reporters Without Borders, is concerned about the media situation. He underscored, "The decline of free media is the decline of democracy."

"Free media has been a hope for strengthening democracy. Unfortunately, because of different reasons, free media has stopped developing," he told Al-Monitor. "Four years ago, our circulation was much better than now as TV stations appeared, and they are paid well by the political parties. Rudaw, for example, gathered some good journalists because it can pay them well. In the meantime, some partisan outlets are distributed for free. This has also negatively impacted our performance."

Faruq Ali, Payam TV's general manager, told Al-Monitor that the network is experiencing a serious financial crisis as its sponsoring party is unable to pay as well as before.

The situation has media advocates concerned.

"Some media outlets are paid well on the public budget and this has made some pro-political parties and partisan media outlets do well, whereas independents can't develop, all at the expense of democracy and free speech," Rahman Ghareeb told Al-Monitor. He is the general coordinator of Metro, a Sulaimaniyah-based independent organization for defending freedom of speech.

Independent media outlets urgently need a plan. Harem Karem, a co-founder and editor of The Kurdistan Tribune, has proposed some regulations to invigorate and professionalize the media in Iraqi Kurdistan.

"Regrettably, thelack of an effective regulatory body has paved the way for chaos. There is more echoing of one another, misinformation and unnecessary attribution to anonymous sources than grassroots journalism," he told Al-Monitor. "Political parties as well as powerful individuals have established their own media outlets with large budgets, not only to have a favorable voice but also to defend themselves."

Karem described his idea, saying, "An independent [nonpartisan] regulatory body — including a road map and organizational structure — would be based on the reality on the ground. The body will be set up and managed by the industry to organize and regulate the media and ensure that public interests are protected. The body's primary objective would be to regularly examine the culture, practice and ethics of the domestic media; provide guidelines, code of conduct and training; enforce regulations and provide pre-publication advice to the media industry. I have spoken to the industry leaders, who are ready to support the project, but the question is: Will Prime Minister Barzani approve such a project?"

Al-Monitor asked Farsat Sofi, head of the KDP bloc in the Iraqi Kurdistan parliament, whether there are any projects in parliament to fund all media outlets without prejudice. Sofi said, "There are no projects, but parliament will support such initiatives."

According to the Kurdistan Syndicate of Journalists, over 800 media outlets have been registered in the Kurdistan Region of Iraq. Of them, 153 are satellite TV stations, local TV stations and radio stations, while the remainder are daily and weekly newspapers and magazines.

Muhammad, Ghareeb and Ali unanimously agreed that the Iraqi Kurdish parliament should pass a bill granting funds to all media outlets unconditionally. Otherwise, independent media will continue to suffer.