A widely-shared photo of Iranian director Asghar Farhadi and a human rights lawyer posing with a banner simply condemning “killing” in Gaza has caused controversy in Iran. 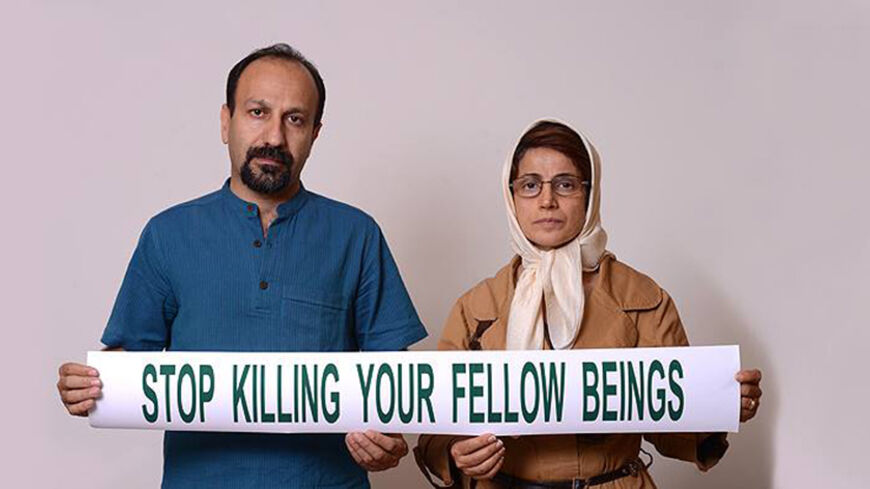 A famous Iranian activist and a film director have sparked a media campaign to condemn the killings in the current war between Israel and Gaza, drawing support from Facebook users and some criticism for taking a neutral position in the conflict.

Iranian director Asghar Farhadi and Iranian human rights lawyer Nasrin Sotudeh posed for a picture holding a banner that read, “Stop Killing Your Fellow Beings.” The picture, which was posted on the Facebook page of Sotudeh's husband Reza Khandan on July 14, was a response to the current war between Gaza and Israel.

Farhadi is the Oscar-winning director of “A Separation,” an Iranian movie that dissected many religious and class issues in Iran. Sotudeh, one of the best-known human rights activists in Iran, was arrested in the post-2009 election crackdown. She was released shortly before her prison sentence was completed, just before President Hassan Rouhani’s arrival in New York for the United Nations General Assembly in 2013.

The campaign’s slogan does not take a partisan position toward the current war and instead focuses on its humanitarian aspects. Its Facebook page, however, is more explicit in its condemnation of the deaths in Gaza. “We denounce the massacre of human beings anywhere. Join our protest against the massacre in Gaza,” the description reads in both English and Persian. As of now, over 200 Palestinians and one Israeli have been killed.

The page, which at the time of this writing has more than 27,000 "likes," encourages people to take a photo of themselves holding a “Stop Killing Your Fellow Beings” sign or banner. Some submitters have written the slogan on their arms or hands. Many of the participants appear to be in Iran or have Iranian names, but there are many pictures of people clearly outside the country as well.

Notably, none of the pictures uploaded by the administrators indicate the nationality or religious affiliation of the participants. There are no flags, nor pictures of world leaders. The administrators have not yet responded to email inquiries of whether the Facebook page is associated with Farhadi or Sotudeh or if it is an independent project inspired by their original photo. Khandan also shared the link to the Facebook campaign when he shared the picture.

The campaign has not gone without criticism, however.

Armin Ghobadi wrote for Manoto, an affiliate of the Manoto Persian-language entertainment satellite station, “While some have asked, ‘Why hasn’t Farhadi shown this type of reaction to the domestic affairs of the country?,’ it is noteworthy that in this symbolic gesture he did not reference any country or specific place, and it includes all of humanity at all points of the world.” While this is a sympathetic reading, Sotudeh and Farhadi’s banner was clearly a response to the war in Gaza.

Conservative Iranian website Bultan News also criticized the campaign, suggesting it is misguided. “Maybe they are under the influence of Israeli media and supporters of Zionism that they’ve become neutral and peace-seeking,” read the Bultan article. “These days with headlines such as ‘Israel under fire’ and ‘Bombing of Israel,’ they pretend that perhaps … it’s the people of Tel Aviv who have suffered 200 dead.”

The article went on, “They say you have to have suffered pain to understand those afflicted with pain. Us Iranians, two decades ago, were involved in an imposed and costly war. We understand very well what the meaning of an invasion is and what kind of feeling it gives one toward the invader. It's as if Asghar Farhadi and Nasrin Sotudeh aren't Iranian, that they easily absolve the invader of responsibility, and while pushing the Israelis to end the raining of missiles, invite the Palestinians to peace.”