At rallies to mark Quds Day, Iran’s leaders called for Muslim solidarity with the Palestinian people and accused the West of hypocritically supporting human rights while ignoring genocide in Gaza. 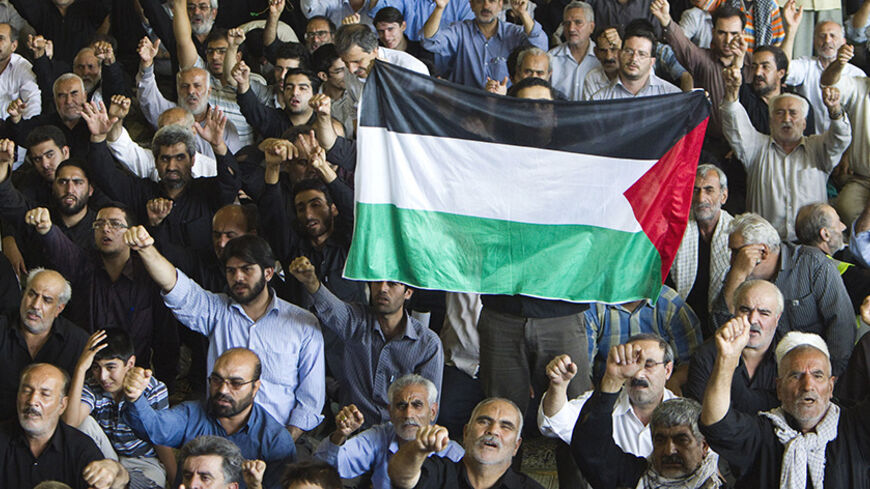 Iranians shout anti-US and anti-Israel slogans as one of them holds a Palestinian flag during Friday prayers after the Jerusalem Day demonstration in Tehran, Sept. 3, 2010. - REUTERS/Raheb Homavandi
Arash Karami
@@thekarami
July 25, 2014

Iranian officials stated their support for Palestinians in Gaza during the Quds Day rallies, which take place on the last Friday of Ramadan in support of Palestinians.

“I hope that the people of Gaza can have a normal life and for this, everyone has to stand up,” said President Hassan Rouhani before joining the rallies. “We can be victorious against the invaders if Muslims are united with one hand. With respect to Israel, there is no option other than unity, persistence and resistance.”

Rouhani continued, “History will judge those who are silent, that when children and innocents are killed are silent,” adding, “In previous Quds Day rallies, the cry was for the land of Muslims and dear Quds, which has been occupied by the occupier, be freed and people return to their homeland. But this year, we are witnessing … genocide in the Palestinian territories.”

“Israel should understand that it cannot keep its previous arms for its occupation. It has to take steps toward humanity and the desires of the world,” Rouhani said.

During the Tehran Friday prayer, Ayatollah Ahmad Khatami said, “Anti-Zionism is the axis of the unity of our nation. At this rally the marja, the head of the three branches, and parties and groups and individuals of every opinion have invited people to Quds Day.”

He added, “Quds Day is the path of the Iranian nation. Those who chanted ‘Neither Gaza nor Lebanon’ during the 2009 sedition were separate from Quds Day and if today their slogan is still this, they are separate from the nation. The people today say, ‘Both Gaza and Lebanon, my life for Islam.’”

Ahmad Khatami was referring to the post-2009 election protests, during which at certain protests some chanted, “Neither Gaza nor Lebanon, my life for Iran.” Hard-line authorities often refer to these protests as “the sedition.”

Ahmad Khatami said that if it were not for the support of Iran, “the Zionist regime would have occupied all of Gaza.”

The head of Iran’s judiciary, Ayatollah Sadegh Larijani, said that the current war in Gaza, which at this point has killed over 800 Palestinians and 30 Israelis, revealed the double stands of the United States and other Western countries, particularly those in Europe.

Quds Day rallies started after the 1979 Iranian revolution at the urging of then-Supreme Leader Ayatollah Ruhollah Khomeini. Iranian news agencies cover the rallies minute by minute and report on all of the speeches and statements of officials. Pictures of Iranian officials and military commanders at the rallies are published widely across Iran's traditional and social media.