Conservative media outlets in Iran have attacked Reformist news organizations for failing to report on the conflict in Gaza, prompting the editors to defend their coverage. 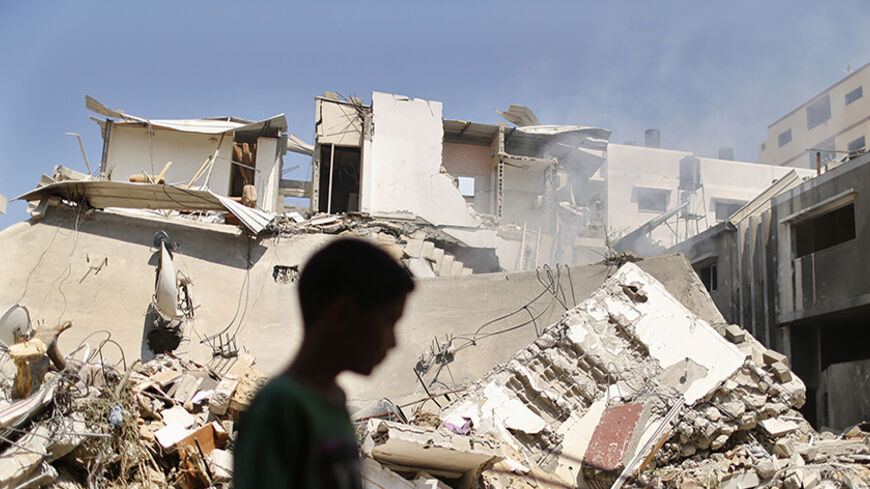 A Palestinian boy walks past the remains of a house destroyed by an Israeli airstrike in Gaza City, July 23, 2014. - REUTERS/Suhaib Salem
Arash Karami
@@thekarami
July 23, 2014

Iranian TV and a number of conservative websites have accused Reformist newspapers of not sufficiently covering the current war in Gaza. The accusations, which reflected the political divide in Iran, became so intense that a number of Reformists papers and editors felt compelled to respond.

Since the war began July 8, Shargh, one of the best known Reformist papers in Iran, has chosen Gaza as their top story twice. Inside their July 22 edition, their cartoonist Arvin depicted Israeli bombs falling on a crib, expressing the paper's concern for the disproportionate number of Palestinian children to be killed:

Most conservative media outlets, even in their cartoons, have been more explicit in their condemnation of Israeli's military incursion into Gaza. Tasnim News Agency’s cartoon, for example, depicted Israeli Prime Minister Benjamin Netanyahu putting a hospital through a meat grinder as UN General Secretary Ban Ki-moon, with his eyes closed, plays the accordion:

Principlist website Young Journalists Club, one of the earlier sites to attack the Reformist media over its coverage of Gaza, compared the non-Gaza-featuring front pages of Reformist papers Etemaad, Arman, Iran and Shargh to the front pages of The Washington Post, The Independent and The New York Times, on which Gaza featured prominently.

The article read, “With two weeks passed since the invasion of the child-killing Zionist regime against the oppressed people of Gaza, and while the awake conscience across the world is on this tragedy, but in Islamic Iran, which is at the front of exposing the barbarism of the Zionist regime, some prefer to use their political and media outlets to pursue partisan and political fights instead of covering the oppression of Palestine and the brutality of the Zionists.”

The managing director of Shargh responded to these accusations July 22, tweeting, “Shargh knows issues such as Gaza to be humanitarian and not partisan or political. It’s best that television and Principlist media, if they are honest, not look at it this way.”

The Palestinian cause has been an important one for the Islamic Republic of Iran since the 1979 revolution and is sometimes used as a wedge issue in domestic political battles. While the chant “Neither Gaza nor Lebanon, my life for Iran,” was not sanctioned by the Green Movement leaders during the post-2009 election protests, it still continues to anger Principlists today.

The editor-in-chief of Politics Today, Mohammad Safari, told Tasnim News Agency, “Reformists have not taken any action to show their innocence on this chant.” He also called the coverage of the Reformists on Gaza “weak” and compared it to their Syria coverage. The editors of Shargh, Ebtekar and Iran newspapers all defended their Gaza coverage to Tasnim.

Reformist newspaper Arman responded that connecting the “Neither Gaza, nor Lebanon” slogan to Reformists “is a lie.” The report called the link “misleading and fabricated.”

After Iran TV's news program 20:30 reported that Etemaad was not paying attention to Gaza, Reformist Etemaad called it “biased.” Etemaad claimed that since the beginning of the war, the newspaper has been leading the coverage from a “humanitarian, Islamic and media” angle.