A paper crisis exacerbated by US sanctions is weighing down Iranian daily newspapers, which are resorting to everything from closures to online paywalls. 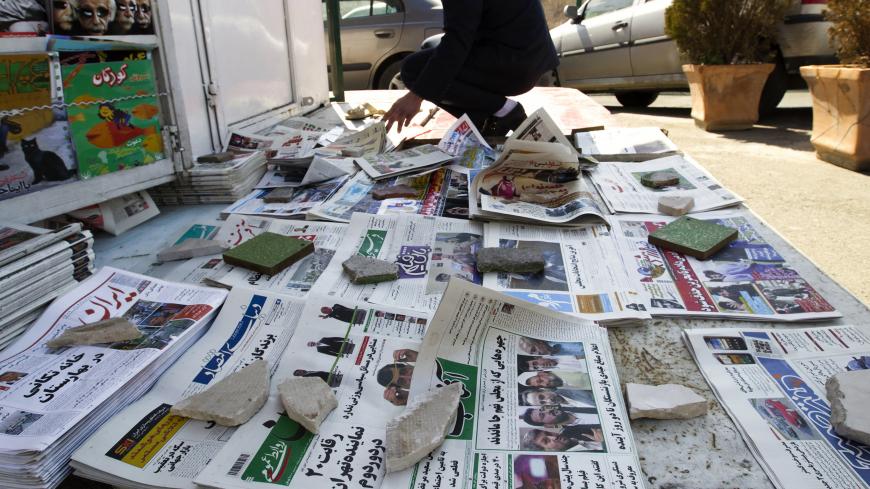 A man looks at newspapers at a newsstand, Tehran, Iran, March 4, 2012. - REUTERS/Raheb Homavandi

The future of some Iranian newspapers is in limbo as they can't afford paper, a new phenomenon stemming in part from US sanctions.

Paper imports have grown increasingly expensive in the past year, and especially since May, when the United States withdrew from the nuclear deal with Iran — the Joint Comprehensive Plan of Action (JCPOA). A number of newspapers have been forced to shut down or reduce their page count and circulation. Contributing to the problem is the impact of the rial devaluation and associated issues related to imports. The Paper and Cardboard Producers’ Syndicate told Iran's Financial Tribune that the price of publication paper has doubled in the past year because of currency exchange rate volatility.

The reformist Hambastegi newspaper was one of the first victims, closing July 17. Experiencing the same problem, Kar va Kargar on July 25 was unable to publish for the day. Meanwhile, the high-circulation Hamshahri newspaper, which belongs to the Tehran municipality, and Reformist paper Sazandegi both eliminated eight pages of their folios. The tabloid Haft-e Sobh was compelled to raise its prices, doubling the cost to 20,000 rials (48 cents). Additionally, Ettelaat, one of the oldest dailies in Iran, seems to have stopped publishing its 50-year-old sports magazine, Donyaye Varzesh.

Media outlets are fighting to overcome the newsprint shortage by any means available. Sazandegi has chosen to bypass the shortage by publishing on more-available — but also more-expensive — glossy paper. Meanwhile, a number of dailies, including Shargh, are trying to compensate for the added expense through their web editions by turning to paywalls, a new phenomenon in the Iranian press.

"We haven’t found any paper in the market for two days now. Those who have paper have stored it. Even the very company we used to purchase paper from, which has received the 'governmental dollar' [for its imports], is unwilling to sell a kilogram [2.2 pounds] of paper to us," Kar va Kargar Executive Manager Esrafil Ebadati said July 25. “Governmental dollar” refers to the official US dollar, which converts to 42,000 rials, reserved by the Central Bank for licensed imports of essential goods. The open market rate is more than twice as high, hovering around 100,000 rials per dollar. Elaborating on the current condition of the paper market, Shargh chief Mahdi Rahmanian said July 25, "Those who have received governmental dollars to import paper have either imported [something else], imported less [paper], or have stored it and are [now] selling it at a high price."

Rather than raising prices, cutting pages or stopping publication, some independent and privately owned newspapers are reluctantly reducing their circulation. Speaking on condition of anonymity, the manager of a distribution company gave Al-Monitor before-and-after circulation figures for the recent crisis:

Much of the crisis appears to originate in profiteering related to the currency devaluation and associated obstacles to normal trade. Until the fall of 2017, Iranian merchants had imported paper at the official rate of 32,000 rials to the dollar. When US President Donald Trump "decertified" the JCPOA in October, the rial began to lose value on both the official and open markets. Amid the weakening of Iranian currency, paper importers seem to have gradually refrained from selling their stock, perhaps waiting to see when and at what rate the currency will stabilize. The apparent logic at work is that selling stock later could result in a better price and profit. Conversely, selling stock right away could create vulnerability to future supply and price shocks for importers.

In response to the price surge, authorities have designated publication paper an essential good, with importers now eligible to receive currency at the official rate of 42,000 rials per dollar. But as a number of importers are accused of violating the law, there could be further disruption if they are punished for importing other goods or profiteering.

According to the Etemaad newspaper, some importers with access to hard currency at the official rate have imported paper but then sold it to fast-food restaurants, which need paper for wrapping sandwiches.

There are even more damning rumors swirling around in Tehran. A paper seller who primarily supplies Reformist dailies and spoke with Al-Monitor on condition of anonymity indicated that one prominent daily has had a role in the turbulence on the paper market.

"As the paper crisis was beginning, one newspaper purchased all the available paper to store it and make a profit later. What shouldn’t be neglected here is that importing paper into the country takes at least two months. So with the wealthy newspaper buying all the available paper on the market, prices skyrocketed. In fact, this well-known newspaper has turned into a middleman, selling paper at high prices to others." He added, "After that, the other middlemen also refused to sell their paper in order to profit more" later on.

The source continued, "The Ministry of Industry, Mine and Trade gave governmental dollars to a number of companies to import paper. But what happened next added to the problems, as a few companies [used the money to import] something else. This is [one reason] why paper has become scarce and prices have soared." While similar issues have arisen and been confirmed in relation to other goods, most notably cellphones, Al-Monitor was not able to independently verify these claims.

On Aug. 4, Minister of Culture and Islamic Guidance Abbas Salehi urged government intervention, warning that the country only has enough paper for two months. In response, the Ministry of Industry, Mine and Trade on Aug. 7 agreed to Salehi's request, approving the emergency import of 20,000 tons of paper. It is unclear whether or when this might affect paper prices. In the meantime, authorities may turn to other measures — such as expanding the crackdown on corruption to include hoarders.