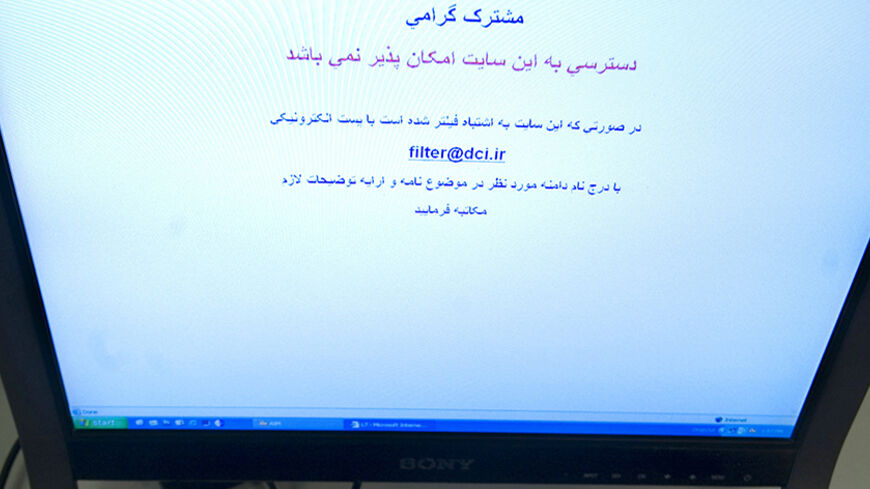 An Internet user tries to log onto Facebook and receives the message, "Dear customer, access to this site is not possible,” in this Tehran, May 25, 2009 file photo. - REUTERS/Morteza Nikoubazl
Arash Karami
@@thekarami
July 14, 2014

Eight Facebook activists in Iran were sentenced to a total of 127 years in prison, according to the administration’s Islamic Republic News Agency (IRNA).

The names of the activists were not given but they were described as “youth.” They were originally arrested in July 2013 and charged with colluding and gathering against national security, propaganda activities against the system, insulting sacred symbols, insulting the judiciary and insulting specific individuals.

It is not clear whether the individuals, some of whom appear to have been administrators of Facebook pages, were working together or if the police operation was part of a larger roundup by security forces. The activists lived and were arrested in various cities including Tehran, Yazd, Kerman, Shiraz and Abadan.

The activists were sentenced by judge Mohammad Moghayeseh, who presides over Branch 28 of the Revolutionary Court in Tehran. Moghayeseh, who has a reputation for handing out long sentences, had also been responsible for sentencing many of the individuals affiliated with the Green Movement arrested after the protests of the contested 2009 presidential elections.

According to the IRNA report, the activists' cases have been sent to an appellate court.

The Iranian Cyber Police, commonly referred to by their Persian acronym FATA, are responsible for monitoring cyber activities. The division was formed to monitor activists organizing protests after the 2009 elections.

FATA’s most notorious case was that of Sattar Beheshti, a relatively unknown blogger it was accused of torturing to death. After domestic and international condemnation, the judiciary conducted an investigation and found his body had been bruised. The chief of Tehran’s Cyber Police was dismissed. Beheshti’s mother, Gohar Eshghi, has become a vocal activist seeking justice for her son's death.

Iran’s Revolutionary Guard Corps also has a cyber unit that monitors online activities. In December, it arrested 16 individuals for a variety of transgressions, including employees of technology website Narjenji. In June, the Narjenji staff members received sentences ranging from one to 11 years in prison for espionage and working for foreign media organizations, including BBC Persian.

Facebook is perhaps the most popular social media website in Iran. The most recent phenomenon is the campaign against mandatory veiling “My Stealthy Freedom,” started by Iranian-born journalist Masih Alinejad. Women in Iran take off their hijabs and share pictures on the Facebook page, which has more than 500,000 likes and has been commented on by top Iranian officials.