The deputy head of Iran's judiciary has said that there is no move to pardon blogger Soheil Arabi, sentenced to execution over Facebook comments, but there is a request to review his case. 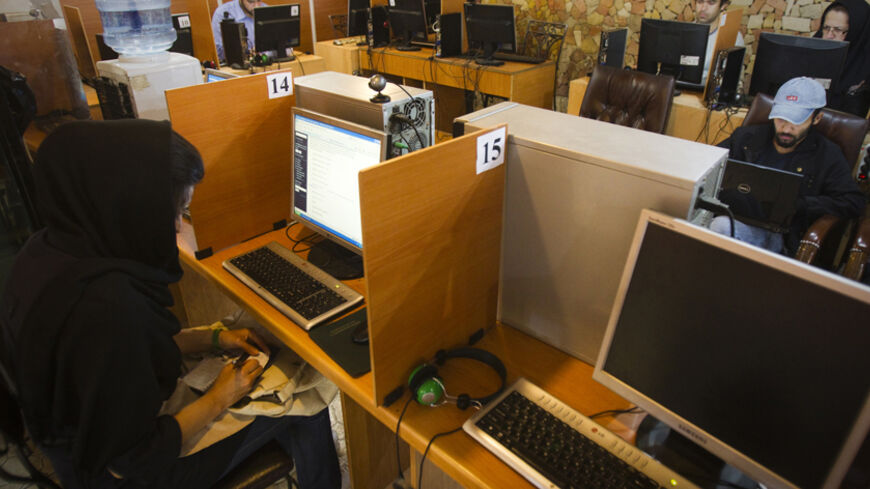 Customers use computers at an Internet cafe in Tehran, May 9, 2011. - REUTERS/Raheb Homavandi
Arash Karami
@@thekarami
December 2, 2014

On Dec. 1, the deputy head of Iran’s judiciary, Gholam Ali Mohseni Ejei, responded to a reporter’s question about Soheil Arabi, who was sentenced to death for Facebook posts deemed insulting to the Prophet Muhammad. Ejei said, “Currently, there is no pardon, and he’s been convicted of ‘corruption on Earth,’ but there has been a request for his case to be reviewed again.”

According to the transcript provided by Islamic Republic News Agency, Mohseni Ejei did not elaborate further.

Many Iranian Facebook users became aware of Arabi’s case on Nov. 24, when Iran's Supreme Court upheld the death sentence for Arabi, who was convicted in a Tehran criminal court with insulting the prophet. A Facebook page against Arabi's execution was set up to spread awareness about the case.

According to Arabi’s lawyer, Vahid Moshkani Farahani, the Tehran court had originally sought the death penalty for Arabi for “insulting the prophet.” When the Supreme Court reviewed the case, it upheld the ruling and added the “corruption on Earth” charge, which also carries the death penalty.

Arabi was arrested on November 2013 along with his wife Nastaran Naimi, who was soon released. Naimi made no public comments until the Supreme Court ruling, and has since pleaded in various interviews with foreign-based media outlets for her husband’s life.

In an telephone interview with journalist Masih Alinejad, Naimi said when she last met with Arabi he was unaware of the Supreme Court ruling and she was forced to convey the news to him herself. She said that the court upheld the verdict over “merely four Facebook posts.”

Naimi said, “We’re awaiting Islamic mercy” and added, “When the Prophet Muhammad was directly insulted, he would forgive it.” She told Alinejad that she decided to break her year-long silence because after the Supreme Court ruling, she felt like she had nothing left to lose.

According to the Centre for Supporters of Human Rights, Arabi was arrested for “Facebook activities and having Facebook pages such as 'The generation that no longer wants to be the burnt generation.'”

Naimi told the center that her husband “was only a citizen and had no other activities.” She said that the only evidence used against him was “printouts of Facebook pages” and “confessions that were attained under pressure from the Islamic Revolutionary Guard Corps.”

According to Naimi, the printouts had no special significance and their contents were merely “copy-pasted.” Naimi also said that there were others who had access to the Facebook pages who could have posted the items in question and criticized officials for not conducting expert analysis to determine which individual contributor to the page had posted the items.

The Revolutionary Guard Corps has recently become highly active in pursuing so-called "cyber crime" in Iran. In December 2013, the group announced it had arrested "cyber activists" in Kerman who had connections to foreigners.