The delusion of Hamas' military wing

Unlike Hamas’ political wing, its military wing is convinced that a group of suicide bombers can "overpower Israel." 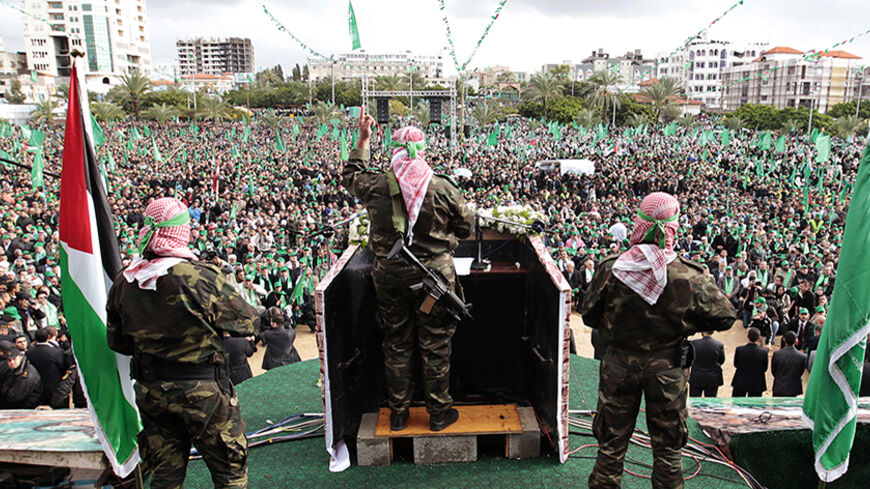 A member of the Izz ad-Din al-Qassam Brigades, the armed wing of Hamas, gives a speech during a rally marking the 25th anniversary of the founding of Hamas, in Gaza City, Dec. 8, 2012. - REUTERS/Ahmed Jadallah

Nine years ago, in the course of my journalistic work in the northern Gaza Strip, my photographer, a Gaza resident, Majdi Arbid, was injured by Israel Defense Forces (IDF) fire. Arbid was transferred by ambulance in very grave condition to Soroka Hospital in Beersheba, where his life was saved. After several weeks, when his condition improved, I got authorization from the Israeli Civil Administration to give him a tour of Tel Aviv before he returned to his home in the Sheikh Radwan neighborhood.

On the Ayalon Highway, the highway leading to the big city, he first laid eyes upon the tall buildings, Tel Aviv’s towers, the branching road system, the bridges, the lights, the life. It was all so different from Gaza, which seemed light years away to him. On the way, we passed the sites Hamas terrorists struck some years before: the Dizengoff commercial center, the Dolphinarium night club, Mike’s Place bar and others. When the astonishment faded from his face, he summarized it thus: "Hamas militants are living in a delusion; they are convinced that with a group of suicide bombers (shahids, meaning martyrs) they could overpower Israel."

After that he had an idea, somewhat comical, somewhat practical: "If we get all of Hamas’ leaders on one bus, both the political wing and the military wing, and give them a guided tour from the Erez crossing to Tel Aviv, they will get wiser, return to Gaza and will stop threatening and dreaming that they could defeat Israel."

I recalled this story this week, when the spokesmen of Hamas’ military wing once again threatened that, through its rockets, it would shake the earth of Israel. Again, the military wing, which managed to force down the political wing and drag it along its path, proved not only the extent of its detachment from reality, but also the fact that the suffering of Gaza's 1.6 million residents is nothing to be measured, nor is it a consideration to be taken into account.

At the same time, the film unit of Izz ad-Din al-Qassam Brigades labored over “propaganda products” to scare the Israeli home front. The production house of the Qassam Brigades even uploaded a “song” in Hebrew to YouTube, which has become a joke for many Israelis. It became a joke not only because of how garbled it was and the pathos with which the Hamas men sing an embarrassing song in Hebrew, but mostly because of the distorted worldview of these armed men, who convinced themselves that they were heading a military power with technological and military superiority over Israel.

And so they sang: “Thus you will carry out attacks, burn military bases and soldiers … strive for contact with the Zionists, shake the security of Israel, kill all the Zionists. A country of weakness and delusions, they do not have a standing in war, they are like a spiderweb.”

The Hamas militants borrowed the term “spider web” from the speech of Hezbollah Secretary-General Hassan Nasrallah, who, in the course of the celebration of Israel’s withdrawal from Lebanon in 2000, said, “It [Israel] has nuclear weapons and the most powerful air force in the region, but in reality, it’s weaker than a spiderweb.”

This is merely a “song” that Hamas produced, which is accompanied by dramatic music and photos of the production and launching of rockets. But it illustrates the huge gap between the grasp of reality of the Hamas military wing, which has once again led the Gaza Strip on a tragic adventure, and the end result of this adventure — enormous ruin, destruction and great suffering for residents of the Gaza Strip.

As a journalist covering the Gaza Strip for Israeli television networks, I met Hamas leaders many times, from both the political and military wings, as well as armed militants from the Qassam Brigades, masked men who even then made overblown threats. Most of the young men who were recruited to the military wing of Hamas lived in dire circumstances in Gaza, mainly in the refugee camps. From a young age they had absorbed the messages and militant principles of the Islamic movement, which laid roots in all of the refugee camps starting from the mid-1980s.

The Qassam Brigades' militants of today are children of the second intifada. Even before they were recruited or enlisted in the Qassam Brigades, they drank the jihadist messages that the movement spreads among all the needy of Gaza who knock on the gates of its institutions (the dawa — Hamas’ welfare institutions). The great neglect of Gaza in the years Israel controlled it helped Hamas to grow.

In the past, hundreds of thousands of Palestinians worked in Israel, learned its language, got to know its culture and even formed ties of friendship with their Israeli employers. In the course of the second intifada and Hamas’ rise to power, these ties have all been severed. The older generation found itself unemployed and without income and the youth found work with the militant wing of Hamas and the other organizations (Islamic Jihad as well as the popular resistance committees). These young men, who have not once in their lives left the borders of the Gaza Strip and have never seen Israel, have been fed the stories of the wonders of the Palestinian rocket, which was developed in Gaza’s workshops and can shake Israel. The stories of the glory of Hamas have been impressed well in the young recruits and the doctrine that has been so deeply etched in them has given them the feeling, or the delusion, that salvation could be gained through the rockets that have been developed in Gaza.

Furthermore, the Qassam rockets not only made far-reaching promises, it also granted a sense of national pride. All the same, this is a rocket whose development started in Gaza at the beginning of the second intifada, and had become a national project that has become more sophisticated with the years and posed a great challenge to Israel. In Gaza there are not many things one can boast about, but the Qassams, the Grad rockets and the underground tunnels have become national symbols that have brought pride to their makers and in many cases to residents of the Gaza Strip as well. A national project is always a constructive project, but in the case of Hamas, it has brought its population little pride and much ruin and destruction.

Following Operation Pillar of Defense in November 2012, when the destruction in Gaza from Israeli air force strikes was enormous, I spoke on the phone with Mahmoud al-Zahar, a senior commander of the movement. He bragged about the capabilities of Hamas’ rockets. Mockingly, with a smiling tone full of self-satisfaction, he asked me, “So, did you believe we’d reach Tel Aviv? How did you feel when the sirens wailed?”

Compared with the military wing of Hamas, even Zahar and former Hamas Prime Minister Ismail Haniyeh are not beholden to too many delusions. Even if they sometimes exaggerate Hamas’ military capabilities, the reality and the balance of power between Gaza and Israel is clear to them. Most of them are over 50 and 60. Their familiarity with Israel from the days of the military rule of Gaza is nuanced and broad, from the frequent detentions to the exile to Lebanon at the beginning of the 1990s.

The political wing of Hamas has worked for years to create a balance of fear with Israel but in a way that wouldn’t cause Israelis to go to a total war with them. “Controlled violence” was a sort of equation that the founder of the movement, Sheikh Ahmed Yassin, supported. At the basis of it was the idea of advancing jihad against Israel, but simultaneously granting the dawa institutions room to operate and the ability to exist.

The military wing has ignored the concept of “controlled violence.” Its people have been excited by the fact that Gaza has become a “weapons producer,” and songs of glory have been composed for the Qassam and the Grad. Hamas militants have forgotten that across the Erez crossing there’s a country with a larger, more sophisticated army, with capabilities that are beyond comparison with Gaza's.

After more than 200 casualties and tremendous destruction in the Gaza Strip, it seems that Hamas cannot see what can be seen from here. Israel, as opposed to what’s sung by the movement’s militants, is not as weak as a spider’s web.