A globally driven attempt to demilitarize Gaza under international law could gain the support of Palestinians and address the core issues of Israel's occupation. 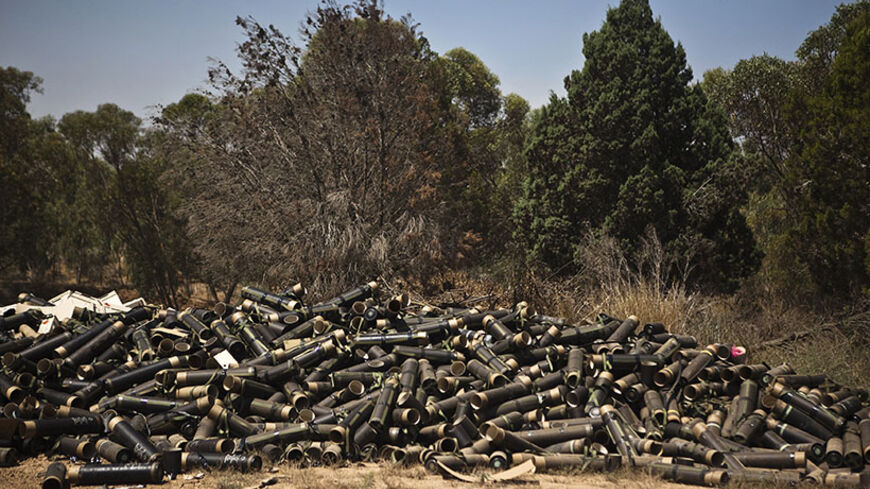 Mortar cases are piled at a military staging area near the border with the Gaza Strip, July 24, 2014. - REUTERS/Nir Elias

The problems facing Israel in its search for a party to guarantee any possible cease-fire with Hamas has led some to suggest new ways out of the current stalemate in Gaza. One new idea is to apply some type of internationally sponsored demilitarization of the Gaza Strip similar to the efforts that produced the removal and disposal of Syria’s chemical weapons.

Such ideas for an international role in the occupied territories has been suggested and re-suggested many times by the Palestinians and UN agencies, only to run into a veto from the Israelis. The Israeli argument is multifaceted on this issue. On the one hand, Israel says it has no faith in the international community’s ability to effectively carry out such an act. Their supporters point to the example of the UN peacekeeping force in south Lebanon as failing to thwart Hezbollah. When a suggestion is made that the force can be multinational and not necessarily a UN force, Israeli officials also find a reason to oppose it generally under the argument that they can’t trust anyone but themselves for the security of their people. Even when it is suggested that a US-led or a completely American force could be deployed, the Israelis have yet another argument, saying that Israel doesn’t want Americans to die protecting it.

This, of course, is not the real reason for Israel’s rejection of any external party that can come between them and their subjects, the Palestinians. Every effort to create a buffer between the Israeli occupier and the occupied Palestinians has been systematically rejected by Israel.

Demilitarization of Gaza will not be easily accepted by Hamas and other Palestinian militants. Speaking about the Islamic movement’s conditions for a cease-fire in Doha, Hamas' political bureau chief Khaled Meshaal was adamant about refusing to give up the weapons of resistance unless the occupation and settlements end.

What is standing in the way of an international solution to the decades-old conflict is not whether such a force can bring about demilitarization and peace. The main objection is in the terms of such a force. Any way you look at it, any external force brought into the conflict will need to be based on some internationally accepted reference point. International law and UN resolutions are full of clear guidelines as to what is allowed and not allowed by an occupying force. Israel doesn’t accept that it is an occupying force, but that the occupied territories are “disputed” areas. After Israel withdrew its settlers and troops from the populated areas of Gaza, it attempted to declare the end of the occupation of Gaza, but was rejected by the international community. As long as Israel controlled Gaza from land, air and sea, the world community has insisted that the term occupation can’t be removed. The rockets that have hit deep into Israel might change that, since the Israelis badly need a system of demilitarization after their troops have failed to do in Gaza what they have routinely done in the West Bank.

The possible introduction of international forces into Gaza would create a few other problems for Israel. Fishing areas that have been sharply curtailed by the Israeli navy would have to be restored and Palestinian fishermen allowed to use their internationally guaranteed waterways. A much more important issue, the discovery of natural gas off Gaza's shores, would also have to be addressed. Some have argued that the entire war on Gaza was based on Israel’s refusal to allow the newly established Palestinian unity government to take advantage of its legal rights in the offshore gas potential.

The world considers Gaza and the West Bank a contiguous area. No international force will accept being involved in Gaza while fulfilling Israel’s strategic aim of separating Gaza from the West Bank. No Palestinian will agree to that, either. The safe passage road between Gaza and the West Bank, which was prominently featured in the Oslo Accord and not implemented by Israel, would have to be revisited. A further, detailed agreement worked out by former US Secretary of State Condoleezza Rice details how best to implement the movement of people and goods between the two Palestinian enclaves.

Once the West Bank is involved in the internationalization issue, the illegality of Israeli settlements and the wall built deep into Palestinian areas will come to the fore. This includes the illegal Israeli settlers, entrenched in places like the center of Hebron, the Jordan Valley and throughout the West Bank.

The temporary international observers in Hebron have been welcomed by Palestinians who see any international oversight as protecting them from the Israeli occupying troops and Jewish settlers.

While Hamas would likely protest the attempts to demilitarize its unsophisticated rockets and other weapons, the majority of Palestinians, including Gazans, would likely welcome seeing international troops as guarantors of safety and a prelude to independence.