Decisions by media networks to censor their reporters in Gaza will not prevent the truth of Israeli actions from emerging. 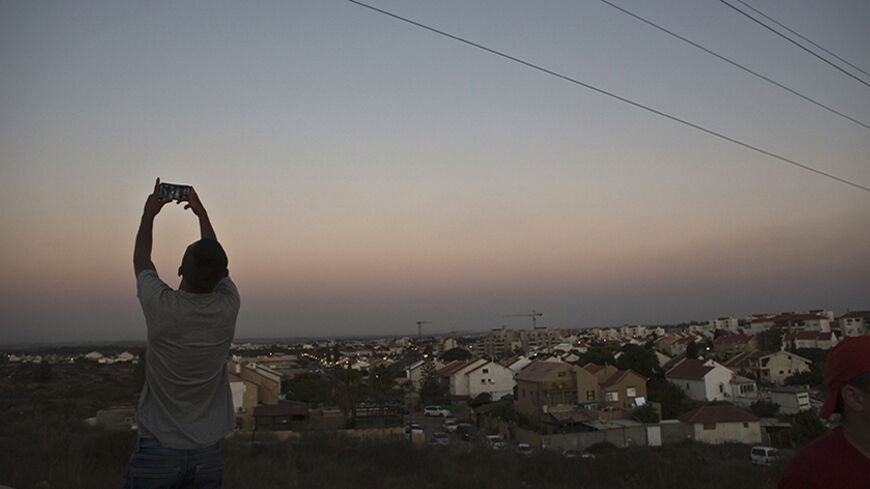 An Israeli teen takes a selfie with the Gaza Strip as his background on a hill near Sderot, opposite the northern Gaza Strip, July 13, 2014. - REUTERS/Nir Elias

War is often remembered by images. Who can forget the photograph of the Vietnamese girl running naked down a road after being exposed to US napalm bombs? Or the American sailor kissing an anonymous nurse in Times Square following the announcement of the end of World War II? For the current war on Gaza, two images that have gone viral and the stories behind them are reflective of the real price of war in terms of human suffering, unbridled hate and revenge.

The first image is of a young man carrying a dead Palestinian boy on the beach in Gaza and the tweet by NBC reporter Ayman Mohyeldin that he had just been playing soccer with the slain child and the three others killed along with him. The boys, ages 9, 10 and 11, were attacked by the Israeli navy for no reason other than they lived in the overcrowded and besieged Gaza Strip.

4 Palestinian kids killed in a single Israeli airstrike. Minutes before they were killed by our hotel, I was kicking a ball with them #gaza

The second image was transmitted by a CNN reporter, of Israelis watching gleefully as the Israeli army mercilessly pounded Palestinians in Gaza with missiles. A tweet by the reporter Diana Magnay, which has since been deleted, stated, “Israelis on hill above Sderot cheer as bombs land on #gaza; threaten to ‘destroy our car if I say a word wrong’. Scum.”

More than anything else, these two images shatter two key narratives that Israel has worked so hard to perpetuate: first, that the war on Gaza is a war on terror and against Hamas militants who launch rockets at peace-loving Israelis, and second, that Israel is morally superior, a claim on which Israel has often prided itself. Israeli Prime Minister Benjamin Netanyahu boasted about this moral supremacy in his eulogy of the three Israelis killed near a Jewish settlement in an area under Israeli control in June. In his remarks, Netanyahu said that Palestinians “rejoice over the spilled blood of the innocent” and pronounced that “a deep moral abyss separates between us and our enemies. They sanctify death, we sanctify life. They sanctify cruelty, and we sanctify mercy.”

Pressure on the media and threats against journalists are nothing new. In the last war on Gaza, in November 2012, Israel was criticized by Human Rights Watch for singling out journalists and media buildings, calling these attacks war crimes. In the current war, members of the media continue to be targets. A clearly marked press vehicle belonging to Media24, which Al-Monitor’s Asmaa al-Ghoul had also been using, was struck by a missile on July 8, killing the driver. On July 17, three bombs from Israeli air raids hit a building housing media companies in Gaza City.

Some have argued that Magnay’s tweet was deleted because of a slur made against Israelis collectively. At the end of the tweet, the reporter had referred to those threatening to damage her car as “scum.” CNN later withdrew Magnay from Gaza because of her tweet and reassigned her to Moscow. The fact remains that this is one of the rare instances of the Western media showing a darker side of Israelis that few have ever seen.

Israeli attempts to paint those Israelis and others in Jerusalem chanting “Death to Arabs” as a reckless minority have not been convincing. When a handful of Palestinians pass out candy when Israelis are hurt, Israeli media and politicians have no problem painting all Palestinians as “sanctifying cruelty.”

The burning alive of Palestinian teenager Mohammad Abu Khdeir and the beating (captured on video) of his American cousin while subdued strike at Israel’s hollow claims of moral superiority. Such acts of brutality have marked Israel’s behavior toward Palestinians and its other neighbors since its inception more than six decades ago. The difference between previous events and today is that there is now irrefutable video documentation exposing the Israelis' behavior.

NBC’s Mohyeldin, one of Time magazine’s 100 most influential people, has been praised as for his professionalism and courage, but he is now nowhere to be seen on his network’s broadcasts. NBC Nightly News with Brian Williams did not feature Mohyeldin and his harrowing eyewitness testimony of the killing of the four boys he had been playing with on the beach. After the incident, NBC ordered Mohyeldin to leave Gaza, allegedly for security reasons, despite replacing him with another reporter, Richard Engel. Thousands of Mohyeldin supporters around the world have been tweeting the hashtag #letaymanreport and believe that replacing him with Engel was an attempt to control the narrative coming out of Gaza.

War is ugly and criminal by its nature, and the current one in Gaza is completely one-sided. The United Nations, and especially its Security Council, were created with the specific aim of preventing political conflicts from reaching the stage of war. There is no morality in war, and international humanitarian law has dedicated volumes to regulating how war should be conducted to protect the innocent and permit the media to work freely.

The images of this war may have shattered the carefully constructed narratives that Israel had created. Debunking these myths and showing the truth will do little to bring back the lives of the soccer-playing children and heal the hatred and animosity that such violence creates. Reporting the truth, however, goes a long way toward exposing false narratives and identifying the criminals perpetuating such conflicts. Despite attempts to silence professional journalists telling the story as accurately as they can in Gaza, the truth will come out.