Contrary to the first intifada, where violations of the IDF code of ethics was considered shocking, many Israelis now support soldiers who act immorally. 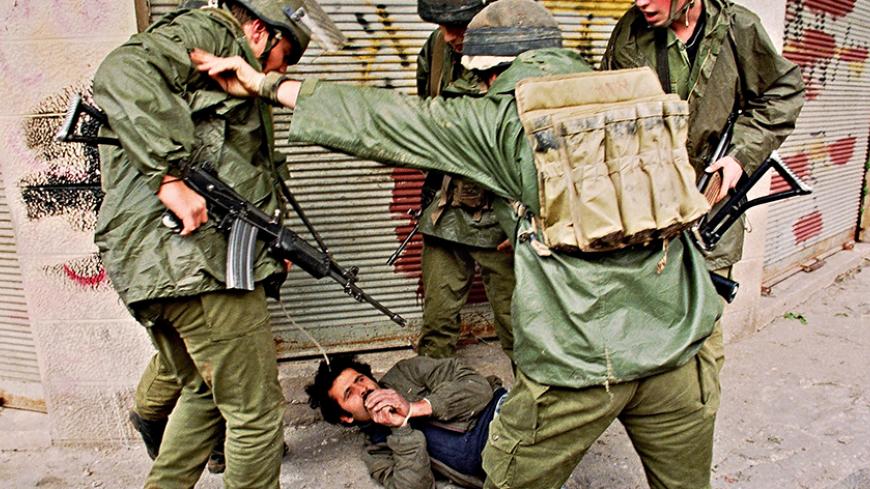 An Israeli soldier restrains another from manhandling an arrested Palestinian who lies on a street with his hands tied together in the West Bank city of Nablus, Feb. 19, 1988. - ERIC FEFERBERG/AFP/Getty Images

In February 1988, four soldiers from the Givati Brigade were filmed brutally beating two young Palestinians near the town of Nablus. The images of the incident sent Israel, and the world, into turmoil. Although the episode occurred in the early months of the first intifada, which erupted in late 1987, it eventually became a symbol of the uprising and presented Israelis with a harsh picture of what was happening in their backyard. It was the first time that the moral cost of the occupation was so clearly exposed.

The trial of the soldiers, the “best of our boys,” received extensive coverage from media around the world. The soldiers were eventually convicted and sentenced to prison. How different that seems from today, when a soldier who shot an incapacitated Palestinian in Hebron on March 24 has become a hero to the masses. Anyone who empathized with the soldiers during the first intifada did so mainly because of the impossible situation facing those young men under 20 years of age, who were expected to confront a hostile Palestinian population on a daily basis.

The soldiers responsible for that beating on the hills surrounding Nablus were neither the first nor the last to be court martialed for excessive use of force against Palestinians, causing grievous bodily harm or death. Many others followed.

The 1988 Givati A trial (after soldiers from the Givati Brigade beat a Palestinian to death in Gaza) and the 1990 Givati B trial (for the four soldiers ultimately indicted for the beating outside Nablus) became an integral part of the military legacy and lessons of service in the occupied territories at the time. The most senior officer convicted of killing a Palestinian during that period was Col. Moshe Givati. Givati later claimed that he was the victim of a media lynching that ultimately led to his conviction even though he only backed his men after they killed a boy participating in a terrorist act.

Generally speaking, courts-martial during the first intifada had high media profiles and were covered almost daily in the news. It was a world without social media, but nevertheless, instances of abuse were documented and spread widely, causing enormous damage to Israel’s image. There were no mass demonstrations at the trials of these errant soldiers and officers. Public trust in the legal system ran high.

In this context, it is worth recalling the famous statement by Defense Minister Yitzhak Rabin at the start of the first intifada ordering his troops “to break the arms and legs” of Palestinians. The Military Advocate General disassociated itself from the policy and acted independently.

Even politicians from the right who came out against Chief of Staff Dan Shomron for being too lenient in their eyes did not win public or political support, unlike what is happening now. Soldiers convicted of excessive violence during the first intifada bore the mark of Cain, even if they themselves were victims of the circumstances of the occupation and the enormous burden imposed on them.

It becomes obvious how much Israeli society has changed when comparing the public’s attitude toward soldiers convicted of excessive force during the first intifada and the transformation of the Hebron shooter into a national hero. There are, of course, many reasons for this, ranging from the rise of the right in Israeli politics to the longstanding Israeli feeling of exhaustion and fatigue resulting from Palestinian terrorism despite the 1993 Oslo Accord. The prevailing mood in the country is that there is no one to talk to on the other side. It is a reality in which an organization like Breaking the Silence is branded a group of traitors, while left-wing, human rights or simply critical civil society groups become targets of incitement.

The current generation of soldiers was born after the first intifada ended in 1993. It lives in a completely different world, one in which official institutions like the army and the courts, once part of the consensus, have become politicians’ punching bags on a daily basis.

The Hebron shooting incident highlights the dramatic transformation of Israeli society, because it is so obvious that this is an especially troubling case. The current targets for fomenting mass incitement are none other than the Israel Defense Forces (IDF) chief of staff, Gadi Eizenkot, and the defense minister, Moshe Ya'alon, both of whom are trying to preserve the IDF’s reputation as an ethical army. Fortunately, Eizenkot refuses to submit to public pressure.

Eizenkot rose through the ranks of an army that had no qualms about sending senior officers to prison for killing Palestinians. In a meeting with soldiers at the Tse’elim camp on April 6, he said, “The shooting ran counter to the professional and ethical norms of behavior demanded of IDF troops. … The incident in Hebron is the kind of event with very little information available about it. On the other hand, there is plenty of disinformation and information intended to manipulate listeners. … If we do not set norms for ourselves as an army, we will lose this war [against terrorism].”

During the first intifada, Eizenkot was the young commander of the Golani Brigade. He spent quite a bit of time in Gaza during the most difficult and tumultuous times there. Nevertheless, he was also part of a generation of commanders who were taught the value of “purity of arms” and the moral superiority that IDF commanders and troops alike must maintain when facing their enemies.

The depths to which the IDF taught purity of arms in the years following the Six-Day War in 1967 can be gleaned from a story that has entered the national mythology. In fact, countless generations of soldiers — including the current defense minister, chief of staff and chair of HaBayit HaYehudi, Naftali Bennett, who served in an elite unit — were raised on this story.

The year was 1969, when an IDF squad was chasing a group of men through the Jordan Valley. Three soldiers suddenly found themselves in a life-threatening dilemma. They had followed their targets to the entrance of a cave and suspected the men were hiding inside. Standing at the cave, however, was a Bedouin woman, breastfeeding her child. She told them that no one else was there. Although they were skeptical, the soldiers decided not to harm the woman and turned to leave. They were shot in the back by the men the woman had concealed.

While there are countless variations of this story, this became the standard version. It was an integral part of how the IDF trained its soldiers. Once, those soldiers were considered heroes. Based on the current online dialogue, heroism is the exact opposite of what happened in the Jordan Valley 47 years ago.