In Gaza, Israel blinded by Hamas

Many Israelis support the Israel Defense Forces' air attacks on Gaza, unaware that the majority of Gaza residents do not seek the destruction of Israel, and that several young people even condemn the Hamas rule of the Gaza Strip. 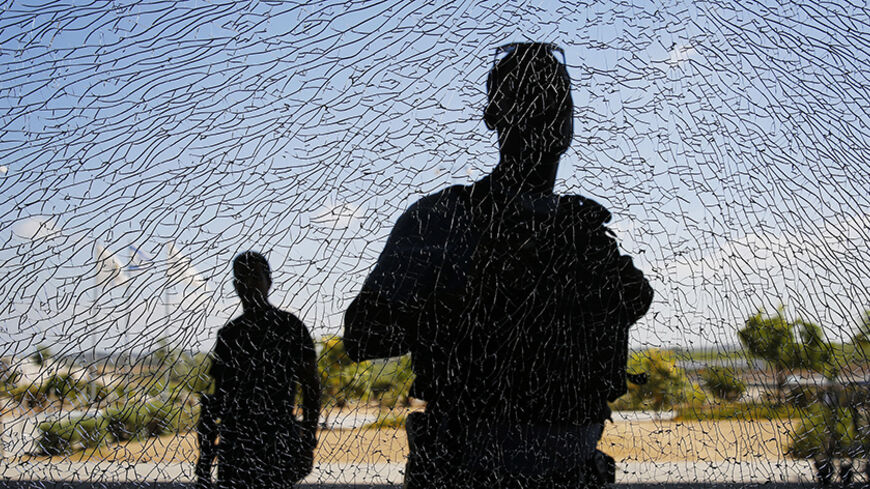 Israeli security personnel look at a window damaged by shrapnel after a short-range rocket landed on Tuesday near the Erez border crossing, July 16, 2014. - REUTERS/Finbarr O'Reilly

My colleague Ben Caspit complained here on July 11 that Israel does not aspire to bring Hamas down. A senior political figure told him, “The vacuum that will be created [by the collapse of Hamas rule in the Gaza Strip] will turn into a magnet for a more radical organization.” That is why Israel is striking at Hamas with one hand, while providing Gaza with electricity, water and vital staples with the other.

Caspit believes that this is a “totally insane situation.” According to him, not a country in the world would accept “a routinely nonstop, low-keyed trickle of rockets and mortar shells on its southern towns and communities.” It was in this spirit that he wrote in the weekend supplement of Maariv on July 14, pointing out to the Israeli reader, that, “The IDF [Israel Defense Forces] should go in and finish the job.” After reading that, one might mistakenly believe that it all started when the leaders of the "Hamas-Gaza land" woke up on the wrong side of the bed last week and decided to clear out their stockpile of missiles by firing them at Israeli civilians, just like that, because the missile is the messenger.

So, here is a reminder of what happened on the days leading up to the barrage of rocket attacks. During the first week of the military operation known as Brother's Keeper, which was ostensibly intended to rescue the three abducted teens (even though the political and military echelons knew with quite great certainty from the early days that they had been murdered), two young Palestinians were killed July 1, one of them about 15 years old. Although the murderers of the three Israeli teens have yet to be caught, the IDF raided about a thousand homes throughout the West Bank and arrested 370 Hamas activists, the vast majority of whom were not brought before a judge. The army struck at the movement’s institutions, and also closed down the Arab American University of Jenin and Birzeit University.

And from Operation Brother's Keeper we return to Operation Protective Edge. Caspit has determined, “All the members of Hamas deserve to die.” But is that also true of their young children, who have no air-defense Iron Dome system to protect them from Israeli bombs? Do they also deserve to die? What about their wives and grandmothers, who have no “protected space” shelter? Do they deserve to die, too? According to figures released by the UN, the number of casualties in Gaza at the time of this writing was 178, including at least 138 civilians (sometimes described as “collateral”), among them 36 children. Whole families have been wiped out. In addition to all that, an additional 1,361 Palestinians have been injured, including 386 children and 249 women. Some 1,255 homes in the Gaza Strip have been destroyed or suffered severe damage, about 17,000 local residents have been forced to abandon their homes and seek shelter in UNRWA schools, and 600,000 people are in danger of losing access to water.

According to Caspit’s definition, anyone who identifies with the suffering of these people (as does the author of this article) is either a “radical leftist,” “delusional” or just a “plain idiot” who does not understand that we are talking about a clash between “a nation that sanctifies life” and “a population with a segment that sanctifies death.” According to him, identifying with the suffering of others is what differentiates us, because “that is what ascribes us on the side of civilized people.” It’s a good thing that there are still a few Israelis, who are willing to get beaten up by those civilized people from the extreme right, who charged at them, chanting “Death to the leftists!” and cursed those Jews who dared to think that setting the Palestinian child of Shuafat on fire and burning him to death was an act worthy of condemnation. This is what happened at the left-wing demonstration in Tel Aviv on July 12.

Caspit is well aware that poverty, hatred and incitement rule Gaza. All of the Palestinians’ efforts, he writes, are focused on, “harming Israel, destroying it with wars or terrorism or propaganda.” He also knows that “if, God forbid, they win just once, they will proceed to slaughter us. That is the entire law on one foot.” But for those who want more than just “the law on one foot” or generalizations, I would recommend reading the manifesto of a youth movement in Gaza called Gaza Youth Breaks Out.

Among other things, it says that Hamas “has spread in our society as a malicious cancer disease, causing mayhem and effectively killing all living cells, thoughts and dreams on its way as well as paralyzing people with its terror regime, … doing all they can to control our thoughts, behavior, and aspirations. … [We are] sick of bearded guys walking around with their guns abusing their power, beating up or incarcerating young people demonstrating for what they believe in.”

“We do not want to hate, … we do not want to be victims anymore,” these young people from Gaza write. They scream out, “ENOUGH! Enough pain, enough tears, enough suffering, enough control, limitations, unjust justifications, terror, torture, excuses, bombings, sleepless nights, dead civilians, black memories, bleak future, heart-aching present, disturbed politics, fanatic politicians, religious bullshit, enough incarceration! WE SAY STOP! This is not the future we want! We want three things. We want to be free. We want to be able to live a normal life. We want peace.”

The senior Israeli official was right when he pointed to the dangers that a vacuum in Gaza would create, and how destroying the Hamas regime would turn Gaza “into a magnet for a more radical organization.” But he should have added that Israel, more than any other element in the region, has the capacity to ensure that this vacuum becomes a magnet for moderate organizations that advocate a two-state solution. Of course, that will never happen as long as the current government includes “senior political officials,” who do not recognize the moderate powers in Gaza, the rights of Gaza's young people and of their brothers and sisters in Hebron to freedom, normal life and peace.