Syrian refugees in Egypt determined to get to Europe

Despite the high risks, Syrian refugees in Egypt are taking to the sea in search of a better life in Europe. 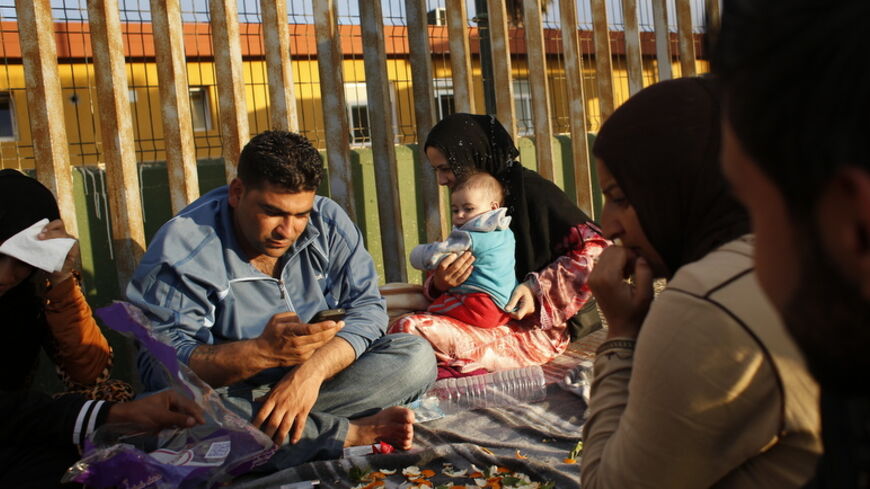 CAIRO — Syrian refugees in Cairo are bidding farewell before setting off for the north coast — and beyond, to southern Europe — in greater numbers. At baladi bars serving warm, tucked-away beers, or gatherings in homes around the city, more and more Syrians in Cairo are getting ready to leave.

Refugee and rights organizations Al-Monitor spoke with say they are anticipating a wave of refugee migrations across the Mediterranean in the second half of 2014, which many fear could see a repeat of events last year — deaths at sea, mass detentions and top-down incitement against Syrians living in Egypt.

Last week, Hala, who requested to have her name changed for this report, celebrated her birthday the same night she packed her belongings for Alexandria. "Life here is … hard," she told Al-Monitor, with an understated sigh, before leaving with a dozen other Syrians the next day.

Ayman fled Syria over two years ago. His town, in the Damascus countryside, was razed by the Syrian army. He was later arrested and tortured for months. He now lives in a small flat in October 6th City, with his wife and 1-year-old son, scraping together money by repairing computers for a local IT company.

Ayman remembers Syria inside a bare front room on the outskirts of Cairo, talking quietly, without apparent emotion. "There was no electricity, no water. They closed down the whole town and besieged the people inside."

He fled once and now wants to flee again — this time to Turkey, by sea — to create a better life for his family. October 6th is full of people with the same thing on their mind, he says.

"There are lots of Syrians that have done it, it's true," he says, pointing out of the window and across the street. "Five families from this neighborhood left a few weeks ago. Two families left yesterday for boats from Alexandria and Damietta." His cousin also left from Alexandria weeks ago.

"All of the Syrians are leaving now. The street next to me used to have 15 families, now it's five. There used to be 250 Syrian families in this neighborhood. Now there are around 90."

This information seems to be common knowledge, as if everyone knows who has gone, who has stayed.

"People speak about [leaving] as if it's normal," Ayman says.

Taher Mokhtar, a doctor with Alexandria's Refugee Solidarity Movement, says this year will see more refugees leaving by sea than before. "The numbers are growing and growing," he says. "More will travel." He recounts a story of one Syrian family in Alexandria who have already tried three times, been detained by security forces three times and are still planning on leaving. "Nothing will stop them."

Between August 2013 and January 2014, over a thousand refugees were imprisoned by the authorities on the north coast. In November, Human Rights Watch reported that of 1,500 Syrians detained, around 1,200 were "coerced to depart, including dozens who have returned to Syria." Arrests are still happening. Around 200 people were detained in Beheira governorate in two separate incidents at the end of last month.

Mokhtar says that the government has relaxed these tactics, but that if numbers continue to grow, "the old policies may come back."

Mohamed Dayri, regional representative at the UNHCR in Cairo, says that efforts are meanwhile being made to stop the latest wave of "illegal departures" and protect the 138,000 Syrians currently registered with the UN.

"There are still some issues with regard to the protection of Syrian refugees," he told Al-Monitor. "We have continued our advocacy with the Egyptian government to provide more residency permits and to facilitate family reunifications." Other schemes include providing food vouchers and cash assistance to the most needy families, as well as awareness campaigns about the risks of leaving by sea.

The key area the UNHCR is working on, says Dayri, is trying to open up Egypt's formal and informal labor markets to Syrians. "Many refugees say to us: 'Don't give me cash, I want to find a job.' We are talking to the Egyptian authorities with a view to finding a solution for these people to stay here."

Alaa from Suweida plans to do that after leaving his home country in the spring of 2012 to escape Bashar al-Assad's military draft.

"I don't like the idea of being a refugee; someone giving you money and not having a job," he says, despite more than a dozen friends or mutual friends leaving in recent weeks. "Of course, when my friends leave I feel depressed, but I don't want to go to Europe."

Instead, Alaa works at a refugee center in Cairo, earning a salary and helping refugees, Syrians and otherwise. It's not enough to pay for a place on a boat, currently estimated at between $2,500 and $3,500 per person, but he can support himself.

However, Saleh Mohamed from the Refugee Solidarity Movement in Cairo, believes that increasingly, refugees see no other way.

"A Syrian friend of mine wants to leave through Alexandria to Europe and, from the way he speaks, a lot of Syrians are trying to leave the same way," Mohamed says. "They understand the risks are high but it seems they don't have any other options."

Since President Mohammed Morsi's ouster, Syrians have come under frequent attack in Egyptian media for purportedly supporting the Brotherhood or terrorism, taking Egyptians' job opportunities or affecting an already ailing economy. "They cannot travel around freely because they're scared if they get stopped, they'll be arrested," Mohamed explains. Many people live on expired passports. The costs to renew them are high.

"They're basically trapped. They feel they are hated by both the government and the people. Escaping across the sea to Europe seems like the only way out," says Mohamed.

Ayman says his choice is between "the hell" of Syria or remaining in Egypt. Like a growing number of refugees, he remains convinced that he will travel.

Refugee organizations and the Egyptian government have a long way to go to turn the tide.

"If you don't want to give us rights in Egypt," Ayman says, "then let us leave — even if it's illegal."