Palestinian-Syrian refugees in Egypt are being forced to choose between deportation to Gaza or Syria as human rights groups denounce the practice. 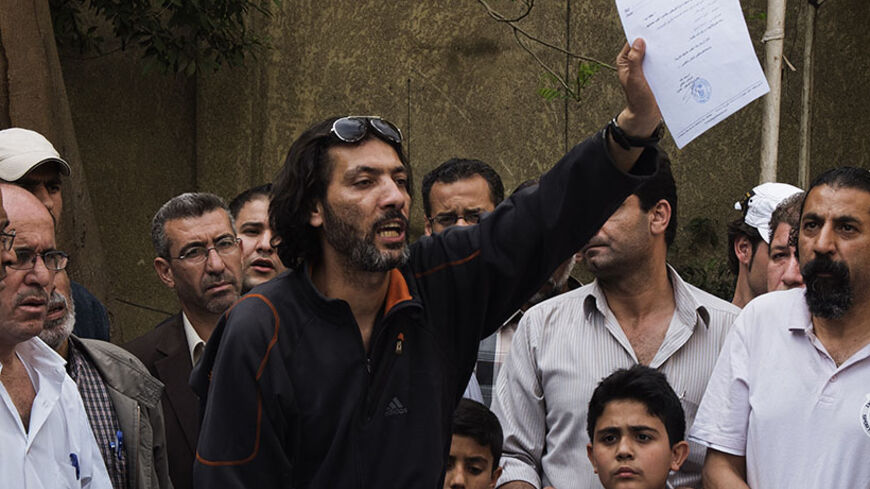 The Egyptian government is keeping them here with a choice, of sorts — deportation to the Gaza Strip or Syria — one week after another 13 Palestinian-Syrian refugees traveling with Youssef and Issa were forcibly deported to Damascus on Aug. 14, according to Amnesty International. Among the 13 was Youssef's father, who he says is now staying in a refugee camp in Damascus.

They have been at the airport since Aug. 10, detained by Egyptian authorities after crossing at Rafah and coming to Cairo to flee the Israeli bombardment. "I think it's because we're Palestinian," says Youssef, 23, formerly a student at Damascus University. "But I have no idea why they are doing this to us."

Both men fled Syria in the spring of 2013 and headed to Gaza. But for Issa, 20, the latest Israeli bombardment made it clear that staying was not an option.

"An Israeli F-16 dropped a bomb near my cousin's home and it almost killed us," he remembers, adding that he had planned to stay in Gaza City with his aunt. "After that, we decided to leave."

Deportations by the Egyptian authorities can often go quietly, undocumented and unreported. As a result, there are no definitive figures available on how many Palestinians from Syria have been deported by Egypt since the Syrian conflict began.

Stopping the forcible deportation of refugees to their country of origin, officially known as "refoulement," is central to international agreements on refugee rights.

According to the 1951 Convention Relating to the Status of Refugees (otherwise known as the Refugee Convention), to which Egypt is a signatory, "No one shall expel or return ("refouler") a refugee against his or her will, in any manner whatsoever, to a territory where he or she fears threats to life or freedom." It recommends that refugees should not be "arbitrarily detained purely on the basis of seeking asylum" or "penalized for their illegal entry or stay."

On Aug. 15, Amnesty International released an urgent call for action to stop Youssef's and Issa's deportation, urging the authorities to "uphold their international obligations."

Yet, Neil Sammonds, a Syria researcher at Amnesty International's London office, admits there is often a "limit to what we can do." He adds, "Sadly, Palestinians from Syria, as well as from other places, have few organizations and states that really protect them adequately."

A November report by Human Rights Watch (HRW) claimed that this has not been helped by the policies of the Egyptian government, which allegedly dictates exactly which UN agency can assist Palestinians: the United Nations Relief and Works Agency for Palestine Refugees in the Near East.

According to the United Nations High Commissioner for Refugees (UNHCR)'s authoritative interpretation of Article 1D of the Refugee Convention, Palestinian refugees in Egypt come under its mandate. UNRWA operates a very small office in Cairo, but that has never qualified Egypt as one of its areas of operation, strictly defined as Jordan, Lebanon, Palestine and Syria. Therefore, UNRWA cannot serve Palestinian refugees in Egypt, or meaningfully help people like Youssef and Issa.

While all this can look like a mess of legalese and agency mandates, HRW claims that the Egyptian authorities have explicitly blocked UNHCR from providing protection to Palestinians. The government, on the other hand, says refugees have to follow the rules — even if they are fleeing a conflict zone.

A Foreign Ministry source claims that refugees from Syria are welcome to "live like Egyptians" providing they apply for an entry visa and security check before arriving. The policy was introduced in July of last year, days after former President Mohammed Morsi was ousted. This visa requirement was then applied to Palestinians, including Palestinians from Syria, in early October 2013.

"We have to respect the rules of this country. We must have security arrangements," claims the source, who asked not to be named. "There are people coming through tunnels [from Gaza] and we are facing a real war on terror. … We have to be careful."

At first, the source denied that Egypt has a "deportation policy, at all," but later conceded that deportations may happen if refugees do not have "correct legal documents." He asks, "But for them to come here without an entry visa, what do you expect? To welcome them with flowers, or send them back?"

In the background over Youssef's telephone, one can hear the hum of airport conversations. He says, "We don't get any food so we have to buy it with our own money. … There have been no beatings, though."

Issa told Al-Monitor that the room where they sleep currently holds around 150 Palestinians waiting for visa renewals for countries in Europe or the Gulf. Youssef and Issa must choose between Gaza or Syria. They say neither option is good.

Youssef admits, "My father is telling me the situation in Syria now is terrible. In Gaza, it's worse. I don't really have a choice."

Some doubt that choosing between Gaza and Syria while in arbitrary detention represents any choice at all.

Egypt is no exception. HRW recently documented over 100 cases of Jordan forcibly deporting Palestinians back to Syria, while Jordan and Lebanon have barred entry to Palestinians since January and August 2013, respectively.

Back at the airport, Youssef says his father told him not to go to Syria, explaining, "Because I'm a youth and I was in Gaza, I will be under the security services' watch." He worries about being interrogated by Syrian intelligence if he returns.

For now, they must wait.