Economic cooperation between Egypt, Ethiopia on the rise

In light of the expected visit of Egypt’s President Abdel Fattah al-Sisi to Ethiopia, the Egyptian-Ethiopian committee is working on resuming dialogue on the Renaissance Dam issue. 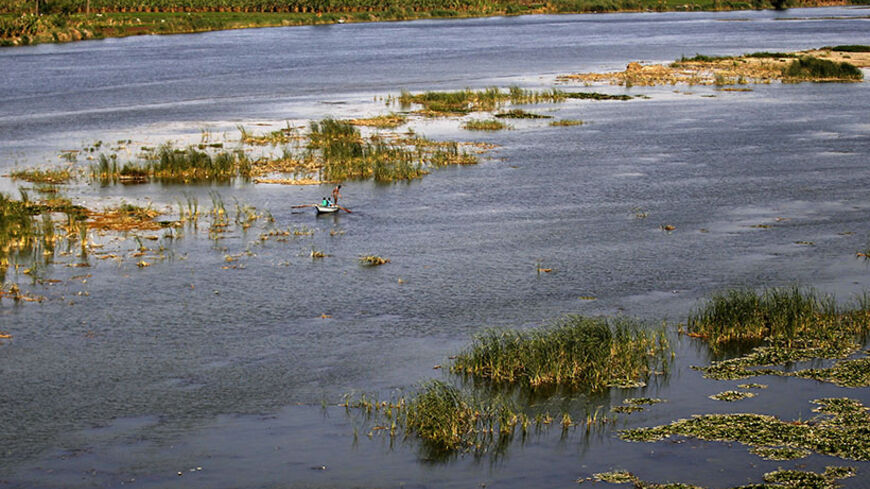 A fisherman travels on a boat with his family during low water levels on the river Nile in Cairo, April 19, 2014. - REUTERS/Amr Abdallah Dalsh

Cairo is working on resuming the Ethiopian-Egyptian activities that were suspended on all levels. This comes in tandem with the preparations for the expected visit of Egyptian President Abdel Fattah al-Sisi to Ethiopia, and as part of the restoration of dialogue aiming to settle the dispute between the countries over the Renaissance Dam under construction on the Blue Nile. The dialogue was re-opened following the meeting that was held between the Ethiopian prime minister and Sisi on the sidelines of the last African Summit held in Equatorial Guinea

Ambassador Salah Abdel Sadek, chairman of Egypt’s State Information Service, said in an interview with Al-Monitor, “A call has been made to activate the activities of the Egyptian-Ethiopian committee, provided that its meetings will be resumed to look into ways to support relations between both countries, and reinforce cooperation on the scientific, cultural, agricultural, irrigation, educational, tourism, communication, meat industry [and] industrial zones levels.”

In 2006, the Egyptian-Ethiopian committee was formed, presided over by the foreign ministers of both countries, and its respective agreement was drafted. As tensions between Egypt and Ethiopia in the negotiations over the Nile waters flared, the work of the committee came to a halt. Its last meeting was held in 2011 on the sidelines of the visit of the late Ethiopian Prime Minister Meles Zenawi to Egypt, following the January 25 Revolution.

After the suspension of this committee’s work, Zenawi decided to form a tripartite Egyptian-Ethiopian-Sudanese committee to solve the issue of the dam and bring into view the damages inflicted on the two downstream countries. The meetings of the committee, however, were not completed and its activities were suspended as the relations between Egypt and Ethiopia became tense again when the dialogue over the crisis of the dam was hindered, as related to Al-Monitor by an official in the Egyptian Foreign Ministry.

The same source said, “The president’s visit that is being planned will not only involve Addis Ababa, but also a number of the Nile Basin countries, as the president wishes to re-open dialogue with upstream countries over the mechanism of the just use of the Nile water in such a way that does not harm any other country.”

“Indeed, the continuity of the Egyptian-Ethiopian cooperation work is often related to the dialogue over the Nile water crisis between both countries. Egypt refuses the Ethiopian insistence on redistributing the Nile water shares according to the 2010 Entebbe agreement, despite the objections of Egypt and Sudan. Ethiopia, however, is proceeding with its program to build dams on the Nile, to store large amounts of water in such a way that impedes the flow of Egypt’s share of the Nile water,” the source continued.

“The Egyptian stance is always the same. We [are willing to] open our arms wide for Ethiopians and turn the leaf of dispute, because we always insist on good neighborly relations and building trust anew whenever we see good will toward our people and intentions not to hurt their water security. This is why we take the initiative to support development in Ethiopia, with which we share deep historical and geographical relations, while taking into consideration that if they do not keep their words, we will not keep ours,” the source added.

Head of the Ethiopian-Egyptian Business Council Ayman Issa told Al-Monitor, “We are currently preparing to hold a meeting for the Ethiopian-Egyptian Business Council in the Ethiopian capital on the sidelines of President Sisi’s visit to Addis Ababa. The date will be specified after the announcement of the date of the presidential visit. We are hoping that this meeting will be the largest gathering for businessmen in both countries in order to push forward the Egyptian investment in developmental fields in Ethiopia.”

He added, “The halt of the work of the Egyptian-Ethiopian committee as a governmental committee is related to the nature of political relations between both countries, and does not necessarily mean the halt of the Ethiopian-Egyptian Business Council’s activities as they are based on the policies of labor market. However, we cannot deny that naturally, the tense political relations between both countries impact the flow of capitals as investors avoid investing their capitals when they sense unstable situations. This was one of the reasons behind Egyptian companies refraining from strongly investing in the Ethiopian market because the situation was not clear for them, or because they believed that achieving financial gains required stable relations between both countries. Signs that the situation is to become better, which we noted during the meeting between the Egyptian president and the Ethiopian prime minister in Malabo on the sidelines of the African Summit, were encouraging enough to push Egyptian companies into investing in the developmental fields in Ethiopia.”

He noted that the “Ethiopian-Egyptian Business Council is encouraging the Egyptian companies wishing to invest in Ethiopia through directing them toward the priorities of the five-year plan during each phase of development in Ethiopia. It is also helping investors overcome any obstacle facing them at the beginning of their projects.”

The Egyptian-Ethiopian cooperation relations in development are always related to the dialogue over the Nile water, a conflict that has been ongoing for years and has always been reflected in the form of political relations. Both countries exchange accusations while Ethiopia believes it has the right to use the Nile sources as it deems fit, without taking into consideration the harm inflicted on Egypt, especially that the dam is built within its territories and given that Ethiopia is an upstream country. Egypt, however, believes that its rights as a downstream country to provide the water needs of its people and to avoid any damages being inflicted due to the dams built on the Upper Nile, are being violated.