With tripartite talks between Egypt, Ethiopia and Sudan concerning the Ethiopian Renaissance Dam scheduled for later in July, Cairo is hopeful that some of the dam’s technical specifications will be modified. 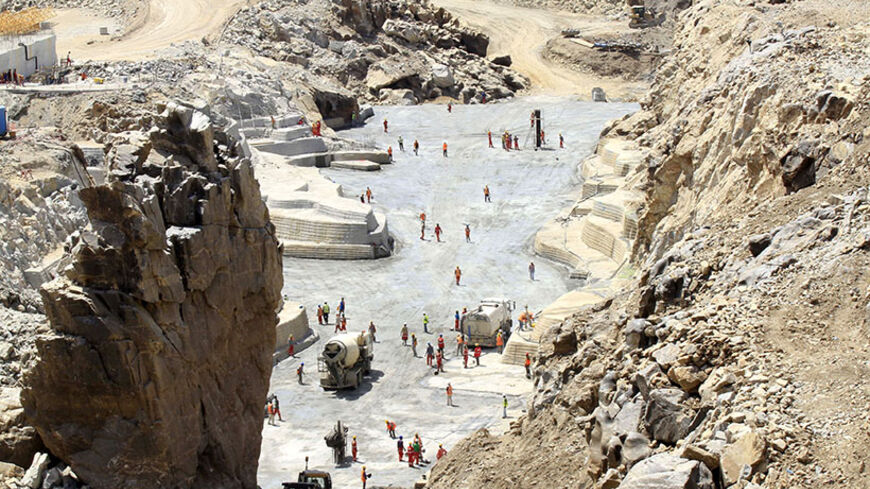 CAIRO — In a state of cautious optimism, the Egyptian authorities dealing with the Nile waters file have begun to prepare for the return of technical negotiations with Ethiopia concerning the Renaissance Dam and the two countries' use of the Nile. This comes after negotiations ended last January and Cairo took the course of international escalation to protect its interests in the Nile.

Egypt and Ethiopia are returning to the negotiating table again, following the meeting between President Abdel Fattah al-Sisi and Ethiopian Prime Minister Hailemariam Desalegn at the African Union Summit in Equatorial Guinea on June 26. In this meeting, the two sides agreed on seven key principles that specify the two countries' uses of Nile water, in the framework of mutual benefit and avoiding harm.

According to the seven principles that were announced by the Egyptian and Ethiopian foreign ministers in a joint statement on June 27 — of which Al-Monitor obtained a copy — the negotiations must be based on respect for international law, prioritizing the establishment of regional projects to develop water resources to meet increasing demands, respect for the results of technical studies concerning the impact of the Renaissance Dam and a commitment on the part of the Ethiopian government to avoid any harm to Egypt's water use.

Speaking to Al-Monitor by phone, Egyptian Minister of Water Resources and Irrigation Hossam Moghazy said, "Preparations are currently underway for a tripartite meeting that will include Sudan, Ethiopia and Egypt to revive negotiations again in Cairo in the second half of July 2014."

Moghazy expressed optimism about the return of technical negotiations, adding, "The joint statement will impose an atmosphere of tranquility and a positive spirit throughout the negotiations, following the state of tension that existed previously."

However, the minister acknowledged that they would not rely on the results of the previous negotiations, which began in November 2013, following the issuance of a report by the International Panel of Experts (IPE) on the effects of the Renaissance Dam. The report confirmed some technical problems in the dam's design as well as harmful effects on water security in Egypt.

"Of course, we will benefit from [what has been done] previously, but we will deal with the issue with calm," he said, adding, "The first meeting will be preparatory and we will not discuss technical issues relating to the Renaissance Dam. We will agree to establishing a mechanism for dialogue and discuss the method of action in the event of a dispute, as well as choosing technical experts.”

Moghazy cited Cairo's interest in the continuation of political action in all countries of the Nile Basin. "In the coming period, there will be many official visits to the Nile Basin countries, in especially Tanzania and South Sudan," he added.

The Supreme Committee for the Nile Waters, headed by Egyptian Prime Minister Ibrahim Mehleb, met on July 6 to discuss the results of the meeting between Sisi and the Ethiopian prime minister, the mechanisms for implementing the Egyptian-Ethiopian joint statement and to agree on Egypt's vision for managing the file after the policy of appeasement and dialogue took effect.

An Egyptian governmental source who is well informed on the Nile Basin file told Al-Monitor, "We realize that the negotiations with Ethiopia will not be easy, especially since all negotiating cards are now known by the other side. Ethiopia realizes the extent of Egypt's objections to building the dam, and Egypt is aware of Ethiopia's insistence on building the dam according to the previously announced specifications."

"We await the start of negotiations in a state of cautious optimism. We had many previous experiences [in this regard], but they did not end in an agreement," he added.

Al-Monitor spoke with Mahmoud Abu Zeid, Egypt's former minister of water and the current head of the Arab Water Council, on this topic. "The joint statement issued after the talks between Sisi and Desalegn includes technical details related to principles for usage of the Nile waters, which can be of benefit in making the negotiations a success," he said.

"Egypt's previous technical positions concerning the Renaissance Dam are still open to deliberation and re-examination, but the basis [of these positions] is reaching technical and engineering solutions that minimize damage," he added, stressing, "I don't imagine that these dialogues will end without a substantial modification in the form or capacity of the dam."

A technical source involved in the preparations for the meeting between Egypt, Ethiopia and Sudan told Al-Monitor, "There are a number of technical files that Cairo will focus on during the negotiations, according to the report by the IPE on the effects of the Renaissance Dam."

"The most important files that Egypt will ask to be re-examined include the effect of the size of the storage lake, increasing the Renaissance Dam's water flow to the High Dam Lake in Egypt as well as the environmental effects on Egypt," the source added. "There are hopes that the negotiations will propose joint Egyptian-Ethiopian mechanisms for operating the dam. This will ensure Ethiopia's interests by providing for its electricity needs and also ensure a flow of water to Egypt at annual rates corresponding to the historical rate set at 55.5 billion cubic meters."

Despite the warm welcome and support expressed by political and media circles in Egypt after the issuance of the joint Egyptian-Ethiopian statement about the dispute, the statement that resulted from the negotiations between Sisi and Desalegn is not a first in the history of Egyptian-Ethiopian agreements and memorandums of understanding. These previous agreements also did not end the state of conflict over the Nile waters.

Former Egyptian President Hosni Mubarak signed a formal cooperation framework agreement with late Ethiopian Prime Minister Meles Zenawi in July 1993. The agreement stipulated that neither of the two countries would undertake any activity relating to the Nile waters that could harm the interests of the other and to respect international laws. However, the agreement was not implemented, because the Ethiopian parliament at the time did not ratify it.

As the convening of technical negotiations approaches later in July, Cairo is cautiously awaiting the results. Meanwhile, authorities in both countries are not giving their positions on the construction works at the Renaissance Dam site or on the possibility of suspending work there until the end of technical negotiations in anticipation of an agreement to modify some of the technical specifications for the dam.