The declaration by Yesh Atid Chairman Yair Lapid that annexation of any area of the West Bank would result in the dismantling of the government raises the bar in a way that actually ensures the survival of the Netanyahu coalition. 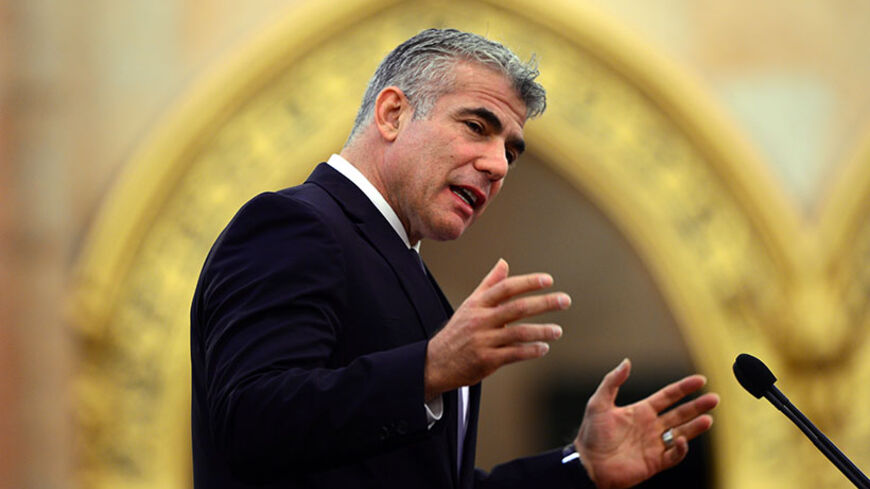 The so-called "maps speech" by Yesh Atid Chairman Yair Lapid at the Herzliya Conference pressed on the weakest point of the thin line on which Prime Minister Benjamin Netanyahu is maneuvering. Since his Bar-Ilan speech five years ago June 14, Netanyahu has been raking in tremendous political capital from his declaration of support for a two-state solution. This is the string by which Netanyahu’s coalition, including the “brothers” Yair Lapid and Habayit HaYehudi Chairman Nafatli Bennett, hangs. As long as the Bar-Ilan pronouncement is not taken to touch on the border between the two states, there’s no border limiting the Lapid and Bennett friendship. The first can bandy about slogans about the need to gather the settlers within the settlement blocs, and the second can float a proposal to annex them. And Netanyahu? He is watching the boys frolic, using one hand to whip Palestinian President Mahmoud Abbas and the other to sign off on another construction plan for the settlements.

Netanyahu understands that a map based on the 1967 borders with balanced land swaps — the only plan considered acceptable by the Western and Arab world — is a road map leading to the end of his government. On the other hand, if he presents a plan that leaves the blocs of Ariel, the Jordan Valley, Hebron and Greater Jerusalem in Israel’s hands, he will have to conduct the peace process mostly via Foreign Minister Avigdor Liberman and Deputy Defense Minister Danny Danon. At that point, even the United States and the other seven opposing countries will not stand in the Palestinians’ way to full UN membership and between Israel and the International Criminal Court.

It’s no wonder, then, that Netanyahu was upset when Lapid called on him to present Israel’s map for a permanent arrangement with the Palestinians. To portray Lapid as lacking any diplomatic spine, the prime minister went to the trouble of digging up Lapid’s 2012 speech in the West Bank town of Ariel, in which the Yesh Atid leader explained why Israel should not present the Palestinians with any plan. It was as if the archives weren’t brimming over with speeches in which Netanyahu attacked the idea of a Palestinian state. Did late Prime Minister Menachem Begin not change his stance when he decided to return to the international border between Israel and Egypt? Did late Prime Minister Ariel Sharon not change his mind when he ordered a withdrawal to the border with the Gaza Strip? Is Netanyahu asking the public to support entrenched politicians who are unable to adapt their positions to changing circumstances?

What ticked off the prime minister was not the part in Lapid’s speech about drawing the map, but the justified fear that he was drawing the initial fault line between the center and the political right. Until recently, Lapid’s agenda was largely socioeconomic. His involvement with military draft for the ultra-Orthodox, educational reform and affordable housing enabled Netanyahu to maintain the strange and potentially disastrous alliance between a Knesset faction that lists among its members former Meretz voters and a faction whose members cannot bring themselves to mouth the word “Palestinians.”

The existence of a diplomatic process provided Lapid with an alibi for his voters from the left. The faltering process supplied Bennett with a protective shield for his voters from the right. The crisis in the negotiations and the clash with the international community following its decision to recognize the Palestinian unity government dissolved the glue that held their alliance together.

Lapid has not turned into the twin brother of Meretz chairwoman Zehava Gal-On, who, in her speech at the Herzliya Conference, mentioned his remark, “The money is to be found between [the settlements of] Itamar and Yitzhar.” As Gal-On noted, on Lapid’s watch at the Finance Ministry, the settlement enterprise is flourishing. Under his aegis, more than a billion shekels ($347 million) have been channeled to the settlements through the funnel of the Settlement Division, the government’s executive arm for construction in the settlements.

The economic data at his disposal have taught Lapid that the resources being transferred to the settlements are small change compared to the heavy net price Israel will pay for its settlement policy, meaning its construction in the territories without negotiations over the territories.

For the time being, Lapid’s declaration that annexation of any part of the West Bank will result in the dismantling of the government is an empty threat. There is no sign that Netanyahu is even considering Bennett’s proposal to unilaterally annex the Etzion settlement bloc or other areas of the West Bank. One can even say that the red line of “attempting to annex even one single settlement unilaterally” places a high bar that ensures the survival of the Netanyahu government. Is it only annexation and a flurry of construction in the settlements that will make Lapid walk out? Why would the ongoing diplomatic stalemate not have a similar result? Why would the danger of the collapse of the Palestinian Authority or the further decline of ties with the United States and the rest of the world not lead there?

The good news is that Lapid, the head of the second biggest party and the one who might be the next prime minister, has presented a diplomatic horizon. He reminded the public that Israel today is a country without borders, and spoke of the possibility of regional peace. The not-so-good news is that his plan imposes on the Palestinian side a priori acceptance of all the settlement blocs according to Israel’s format. This demand is a sure recipe for a freeze if not a blowup of negotiations.

Not only that, but an end to the conflict and achieving regional peace require resolution of the Jerusalem issue and an agreement on the solution to the refugee problem. For that there’s no need to deliver fiery speeches nor even present new peace plans. All Lapid has to do is rummage around in his desk and pull out the Clinton parameters, the Arab Peace Initiative and the Road Map of the Quartet.