The latest unity government is the 17th Palestinian government in two decades, and an enormous number of former ministers are enjoying excessive benefits the government cannot afford. 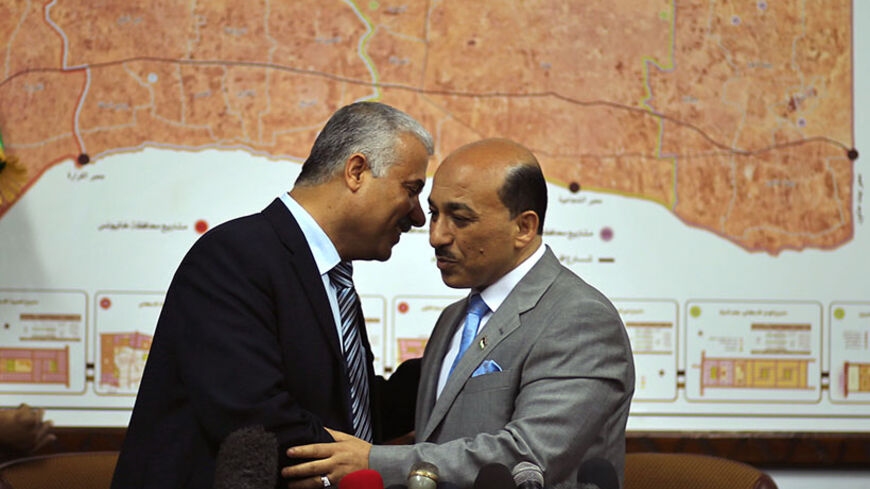 Over the last 20 years, these 17 governments have employed 165 ministers, including the retired and others still in office, according to the Palestinian Council of Ministers’ website. There are at least 10 more ministers from the former Hamas government in the Gaza Strip.

Governments are meant to be formed after the election of the Legislative Council every four years, so the Palestinians should have had only five governments in the last two decades. But circumstances dictated otherwise, and the high number of governments has produced 175 ministers, all of whom receive retirement benefits and salaries, adding yet another burden on an already strained annual budget.

Azmi al-Shuaibi, a minister from the first Palestinian government who spent 2½ years in his post, reports receiving a monthly pension of 80% of his original salary ($3,000), or $2,400 a month.

Shuaibi told Al-Monitor that the formation of many Palestinian governments, compared with the election of only two Legislative Councils in 20 years, is excessive and reflects a state of instability. "This reflects the desire of senior officials to appease people by including them in ministries so that they become part of the regime," he said. "And there are a number of ministries in which there were 'appeasements' in the 1999-2000 government, in which the number of ministers reached 31, justifying the large number of total ministers."

Some go even further. The second deputy head of the Palestinian Legislative Council, Hassan Khreisheh, told Al-Monitor that some ministers are members of the PLO and the Fatah Central Committees, and they receive additional payments in addition to their pensions. They also maintain their government cars and guards as well as their diplomatic passports even after they have left the government.

"Therefore, we have an army of ministers — more than 200 — in addition to at least 40 people with the rank of minister. [They receive] housing allowances, cars, a number of guards, free gasoline and a free phone line and even their electricity bills at home are paid for, as well as travel and work expenses," Khreisheh said. "Thus, their salaries are essentially double, considering all of these things. This constitutes a major burden on a government with few resources. Furthermore, they retain their ministerial benefits after they retire."

Khreisheh noted that 2,000 to 4,000 high-ranking employees in the PA receive at least 50% of total salary allocations, and the rest of the employees receive the remainder. This expense is huge in a country with limited resources that is reliant on foreign aid.

The chairman of the board of directors for the Palestinian Pension Authority and former labor minister in the 16th government, Ahmed al-Majdalani, said that Public Pension Law No. 7 of 2005, issued by the Legislative Council, does not apply to ministers, members of the Legislative Council and governors. According to him, they have a law of their own.

The law Majdalani is speaking of — Law No. 11 of 2004 concerning pensions of members of the Legislative Council, ministers and governors — is more complex than that. Paragraph 8 states, "A minister or his heir is entitled to an amount equaling 20% of his monthly salary for each year that he spent in the government, up to a maximum of 80% of the total amount specified for his monthly salary, adjusted according to the schedule for increased cost of living. It is disbursed monthly immediately after he leaves his post, and for this purpose any period of time less than a year is calculated as a whole year."

Yet, Paragraph 11 of the same law — which increases the burden on the treasury by setting the pension for each minister at at least 50% of his original salary, regardless of his period of service — confirms Majdalani’s claims regarding the minimum percentage. The paragraph states, “Notwithstanding Provisions No. 4.6, 8 and 10 of this law, the pension for each of the head of the Legislative Council, a member of the Legislative Council, the prime minister, a minister or a governor shall not be less than 50% of the monthly salary, regardless of the period of time spent in office.”

Majdalani clarified that ministers receive their pensions directly from the Palestinian Ministry of Finance. He pointed out that he does not receive a pension currently because he is a member of the PLO Executive Committee, a post for which he receives a monthly salary of $3,000.

Economic analyst Maher al-Tabaa said that after calculating the average pension of the 175 ministers — 70% of their original salaries — the total amount in pension paid to all these ministers on a monthly basis comes to $400,000.

Tabaa explained to Al-Monitor, “The annual amount paid to ministers is about $5 million, which represents a burden on the budget and treasury of the PA. Any amount, even a small one, has an impact on the budget when it is added to the total amount paid to ministers. But it has become a right enjoyed by ministers. The only way to solve this issue is through an inclusive system and a legislative and legal framework.”

Tabaa added that in light of the lack of financial resources available to the PA, the budget deficit, which exceeds $1.5 billion, and more than $4 billion worth of debts, the PA is still employing high-ranking figures and officials such as ministers who receive salaries that exceed the capacities of the PA’s financial resources. He said, “This whole situation is considered a flaw.”

Tabaa confirmed that the PA’s budget for 2014 is $3.5 billion, while the deficit reaches about $2 billion after factoring in the Gaza Strip employees. Although the $5 million in annual pensions for ministers is low compared to the overall budget, it is still significant for a state with limited resources like Palestine, Tabaa said.

Economic expert Omar Shaaban explained to Al-Monitor that ministerial pensions, even without considering any of their privileges, make up 2.5% of the $200 million in salaries in the West Bank and Gaza Strip, or less than 1% of the overall budget.

Shaaban noted that while one minister receives a pension worth the salaries of five regular employees, these amounts are considered a small portion of the ministers' overall expenses, which include cars, houses and others.

Financial expert Rami Abdo said that this issue reflects a lack of balance and stability in the Palestinian political system. According to him, the problem is not limited to ministers, but extends to members of the Legislative Council and others working in public office.

Abdo told Al-Monitor that the error lies in the policy of forming governments and designating a separate ministry for each issue. "Everyone knows that, in many cases, the number of ministers is large and not commensurate with the real need for ministers. There is a lot of excess when it comes to creating [ministries], especially since many of the ministries' tasks could be covered by bodies or departments within [other] ministries," he said.

Abdo said that factors contributing to the number of ministers and the financial burden on the treasury are the requests to be assigned a ministry and some individuals' endeavors to reach the post of minister for personal and financial gains. "Many people seek to be a minister, even if only for a short period of time, to obtain the title and the financial benefits available for this job," Abdo said. "Between coming to power in 1994 until 2006, the PA formed eight governments, and in the last eight years, it formed nine governments. Thus, controls must be put in place for ministerial pensions."

Abdo noted that when a minister retires, the pension calculated based on the number of years served will be high, given that his original salary was high. He also noted that some ministers retain certain benefits after they retire, such as guards, cars and property, all of which are excessive for a government largely dependent on foreign aid and with no true state to run.