After popular protests against very generous retirement plans for Iraqi state officials, a new and better retirement law was passed, but it still has many loopholes. 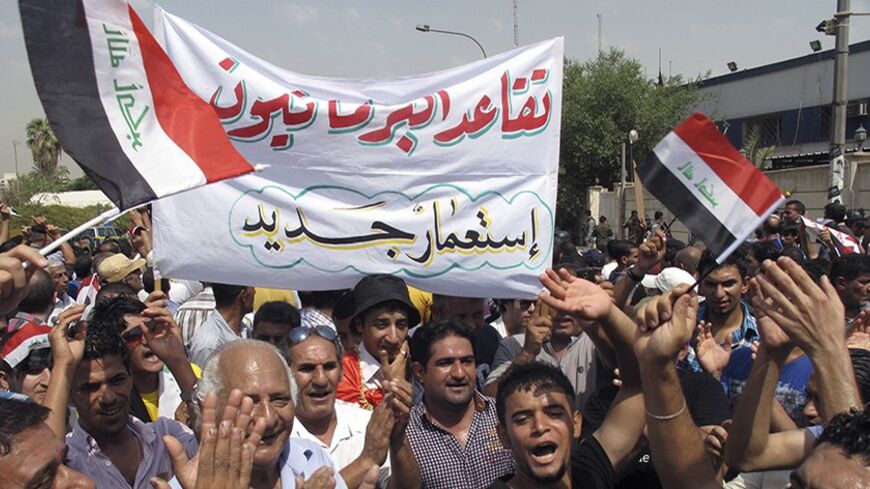 Protesters hold a banner that reads "Retired parliamentarians neo-colonialism" during a demonstration demanding that the pensions of parliamentarians be canceled in Baghdad, Aug. 31, 2013. - REUTERS/Thaier al-Sudani

On Aug. 31, 2013, Iraqi security forces used force to disperse demonstrations organized by activists and intellectuals in Baghdad and other cities to demand the cancellation of privileges and salaries for MPs and Iraqi officials.

The next day, Prime Minister Nouri al-Maliki told the protesters that he supported their demands but that he broke up the demonstrations to prevent them from devolving into terrorism and civil disobedience.

More than five months later, it seems that the demonstrators’ message either didn’t reach its destination or reached it incomplete. On Feb. 3, parliament passed a new retirement law drafted by the government. The law maintains the privileges of deputies, special employee categories and senior staff while placing exceptions on administrative requirements.

It is interesting that Maliki assigned a special committee headed by his deputy Hussein al-Shahristani to respond to the demonstrators’ demands. The committee met on Sept. 1, 2013, and its president held a news conference to inform the public about the changes.

Shahristani said, “The committee has approved canceling pension salaries granted under special laws for all positions and jobs in the Iraqi state; such as the pension salaries in the national assembly law of 2005; the pension law for parliament of 2007; the electoral commission law No. 11 of 2007; the provincial councils [law] of 2008; the university service law of 2008; the law for the salaries of judges; and the law of the High Criminal Court.”

The new law, which was finally approved, granted many fair pension privileges for ordinary retirees and effectively canceled all prior laws. The new law was called the Unified Retirement Law.

But the new law was rife with exceptions for ministers and deputies, and it sparked a wave of popular discontent.

The text of the new law seemed to manipulate the meaning of words while changing nothing, in essence. The protests have continued about that matter over the past months.

Article 37 was especially controversial. It stipulates, “As an exception to the provisions of Article 21 of this law, pension for the president, the parliament speaker, the prime minister, his deputies, members of parliament, cabinet ministers, and those of same grade, members of the governing council, their alternates, members of the interim national council, the president and members of the national assembly, ministers’ proxies and those of the same grade and those who receive the salary of a minister proxy, advisors, those with special grades, and the rank of director general and those who earn the salary of a director general, in cases of retirement, death, or resignation, is calculated with the approval of the competent authorities.”

Article 21 (which Article 37 above provides exemptions for) stipulates that only a government employee who completed 15 years of service and is older than 50 may get a pension.

The new law has a new standard that reduces the pension for these groups from 80% to 25% of the last salary paid to the high-ranking government employee, or to the MP, before retirement.

But Article 37 doesn’t calculate the nominal salary. It calculates the salary and allowances that were paid, and those are often exceptionally large allocations imposed by the nature of the security situation in Iraq. Then 2.5% is added to the last salary, bonus, reward, and allowance for each year of service.

In short, the issue that triggered popular demonstrations was related to a simple equation whereby a public service employee, no matter his position, gets a pension for the rest of his life for just serving a few years, and sometimes a few months, in the government or parliament.

It should be noted that the Iraqi state is saddled with thousands of employees who were hired after 2003 in various capacities as ministers, proxies, general managers, advisers, and members of independent bodies. They left their jobs after various periods of time and they now receive pensions. But not all of them meet the conditions of retirement, the most important of which is the number of years of service, which is supposed to be at least 15 years except in very special cases.

Ironically, the new law, via Article 14, tried to keep the mechanism of appointment and retirement outside of the state’s official and administrative controls. But that was the cause of the popular tension against retired state officials in the first place.

The new law stipulates that an “employee appointed by a presidential decree, by order of the council of ministers, by the prime minister, or by the board of the parliament speaker, should be referred to retirement in the manner in he was appointed.”

Moreover, the law includes other loopholes that would allow granting pensions to those who don’t deserve them. Article 39 stipulates that “as an exception to the provisions of this law, and after a proposal from the president or the prime minister and the endorsement of parliament, a pension of no more than 2,000,000 Iraqi dinars [$1,772] is allocated to Iraqi national figures (or their children) as provided in this law in the event of their death if they did not have a state salary or if their pension was less than 2,000,000 dinars. Standards and mechanisms for determining who is a national firgure should be set.”

Of course, the concept of “national figures” is very loose. And the law itself didn’t specify who will put the controls that determine who are the “national figures.” Is it the cabinet or the parliament?

But looking at the pension law only in terms of its negatives and the objections against it is unfair. The new law raises the minimum monthly pension salary to 400,000 Iraqi dinars (about $350), and this is an important achievement for the support of the poor, who have suffered over the past years. Also, the law has put less stringent controls on several loopholes for the methods of calculating the length of service and for adding the years of schooling and military service to public service. The law did justice to the victims of violence and to political prisoners and others.

All in all, the law is fair for the majority of the Iraqi people. That doesn’t mean condoning the law’s unfair clauses. In the past few days, some of the political forces that passed the law have criticized those clauses.

That will be rich material for the political and electoral debate in Iraq in the coming weeks.