Post-retirement pensions for members of Iraq's Council of Representatives has provoked a heated debate among Iraqi civil activists. 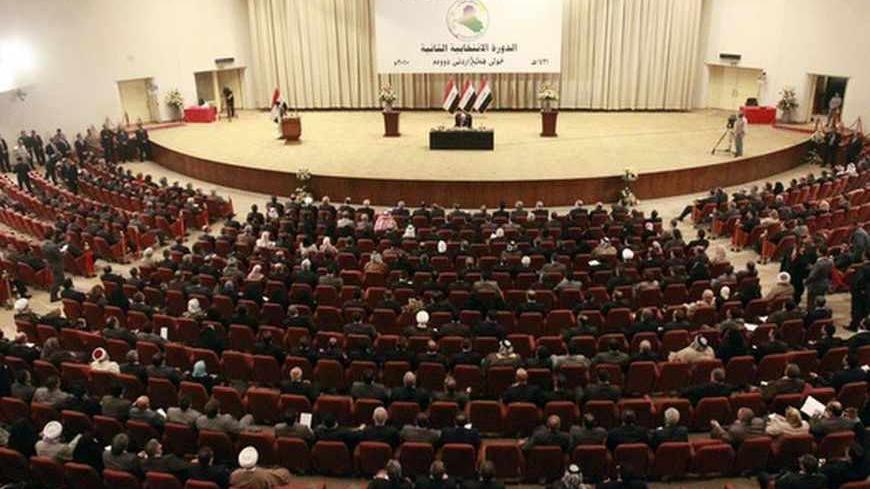 Iraqi civil activists are trying to prevent the current members of parliament from being granted pensions after their term expires in spring 2014.

It is also expected that the law would annul the pensions of ministers, in addition to those of a large number of high-ranking officials in the Iraqi government.

The parliament comprises 365 members with a monthly salary of 8 million Iraqi dinars (about $6,800) in addition to 4 million dinars or (about $3,400) as premiership allocations. When the current legislative session comes to an end, every member of parliament will be granted a retirement salary that equals 80% of their current salary.

Iraqi activists believe that granting the members of parliament pensions after four years of work is a waste of public money. In the General Civil Service system, a public official must remain in his position for nearly 20 years in order to be granted a retirement salary, which should not exceed 400,000 dinars (around $340).

Shamkhi Jaber, a civil activist in the popular campaign calling for the annulment of retirement salaries, said in a statement to Al-Monitor that “Popular pressure has forced political coalitions into discussing these demands within the parliament.”

Jaber, a writer and journalist working for the state-funded Al-Sabah Foundation, noted, “The embarrassment politicians are subject to has led them to be indecisive in regard to the campaign, yet their stance concerning the annulment of the salaries is characterized by procrastination and lack of seriousness.”

Jaber reiterated that “The campaign will not come to a halt until the law is passed with retroactive effect.”

Iyad Mohsen, an Iraqi legal expert, said in a statement to Al-Monitor, “The Iraqi parliament has passed Law No. 50 of 2007, which stipulates granting the members rights and privileges that amount to 80% of the last salary they were paid.”

However, it seems that MPs will agree to cancel their pensions. In a press statement issued on July 8, 2013, Aref Tayfur, an MP and a leader in the Kurdistan Democratic Party, said, “The media mobilization against MPs and inflaming people’s sentiments about the MPs’ salaries in press conferences is a shame.”

Tayfur stressed the need for “everyone to realize that MPs are legal lawmakers who monitor the government’s performance," adding, “They have nothing to do with providing services and solving the problems faced by most citizens. It is not right to censure them this way and to demand that they be denied their pensions.”

Furthermore, Uday Awad, a member of the Sadrist movement, told Al-Monitor that “Political blocs are not ready to pass a law abolishing MPs’ pensions,” adding, “Talks about drafting and legislating the law are mere propaganda.”

He continued, “There are no appropriate grounds in parliament to approve any law that deprives MPs of their privileges, even if a proposal in this regard were submitted to the presidency.”

Since the demand was made in early August, political blocs have been racing to renounce pensions in parliament and a number of provinces.

The liberal bloc, affiliated with the Sadrist movement, and the Muwaten bloc, headed by Ammar al-Hakim, declared it would waive the rights of its members in the legislative councils.

However, civil-society organizations have been pressuring political leaders to legislate a law to cancel pensions, and not limit their actions to political propaganda.