Sinking ties with US linked to Netanyahu's political fortunes

A drop in US-Israel ties has provoked a domestic political crisis for Prime Minister Benjamin Netanyahu, who faces challenges from Avigdor Liberman and Naftali Bennett. 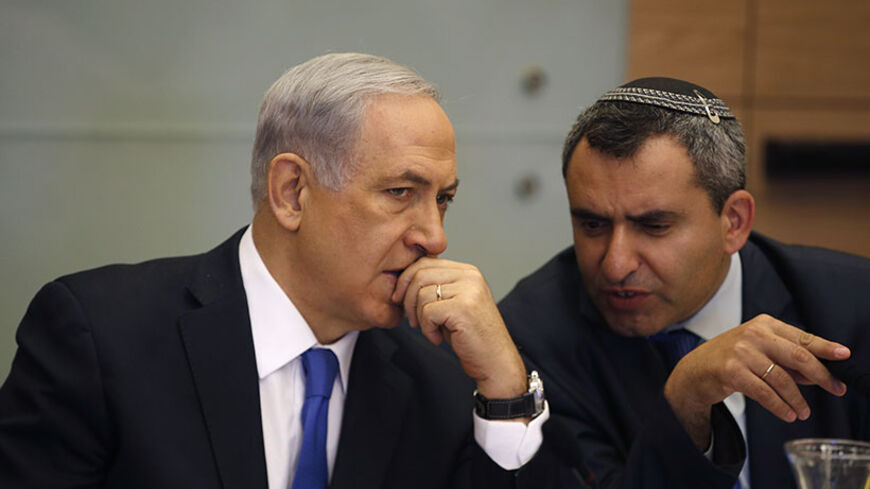 Never before has the status of the relations between Israel and the United States been the way it is now — not even during President Gerald Ford’s “reassessment period” or President George H. Bush’s failure to approve the international loan guarantees. It is the style that I am referring to particularly. Relations between the United States and its small ally in the Middle East have had their share of ups and downs. Despite knowing even lower points than the current one, never before did the situation turn into such a foul quarrel. Respectful of each other, the parties always made sure not to air their dirty linen in public, dissembling control on the outside. Well, no more.

The relationships between Prime Minister Benjamin Netanyahu and President Barack Obama can be divided into a few chapters. Initially, there was mutual suspicion and repressed resentment, which was followed by a long period of status quo. In its wake and after the construction moratorium in the territories, the relationships relatively thrived. Their current term started out like a honeymoon when the negotiations (with the Palestinians) resumed and following the optimism that Secretary of State John Kerry imbued with everyone — even though it had no basis on the ground. With the breakdown of the negotiations came the breakdown in the relationships and trust, having reached its all-time low. An open struggle began, including statements from both sides as well as vitriolic leaks by associates.

Now we have entered the last and worst stage — that of the dirty war, the little tricks and attempts to stick it to each other. Rolling up their sleeves, both sides have spiraled out of control, their present goal being to hurt the other side as much as possible. No holds barred, it’s a free-for-all: open season. If we were to liken these relationships to a married couple, the next stage would see the man — or the woman — leaving the house while their lawyers dash to get their hands on the bank accounts and put a lien on them. Never before has such a state of affairs been recorded in US-Israel relations.

On June 2, Netanyahu addressed the Knesset Foreign Affairs and Defense Committee for a periodic briefing. He was asked by Knesset member Zehava Gal-On, chairman of the Meretz Party, what would happen when the Palestinians introduced their reconciliation government. What could be inferred from Netanyahu’s reply was that he had been talking with the Americans (Kerry) who promised to look into it and weigh the matter before taking any action. Convinced that the United States would not be in a hurry to recognize the Palestinian government, Netanyahu turned a blind eye to intelligence reports, the signs on the ground and the various warnings. Instead, he relied on what Kerry ostensibly promised him. Even here at al-Monitor it was estimated that the Americans would be the first to recognize the Palestinian reconciliation government. But Bibi (Netanyahu) stuck to his guns.

A few days later, the Palestinian government was introduced and the United States was indeed the first to recognize it. Netanyahu took a blow straight to the face. Reciprocating, he authorized the construction of thousands of residential units in East Jerusalem and the territories on June 4, in what was perceived to be blunt and public defiance of the United States.

Interviewed by the Israeli military radio station, Dan Shapiro, the US ambassador to Israel, said Israel had transferred half a billion shekels (about $144 million) to the Palestinian Authority (in tax rebates) after the new government had been introduced. If the Israeli government takes such a step, what does it want from us? Shapiro asked.

Disputing that, Israel maintained that the money had been transferred one day before the new government was sworn in. Not to be outdone, the Americans insisted: The money was transferred on the day the new Palestinian government was introduced, at 4:30 p.m. And thus the war of vilification and vituperation continues to this very minute. Netanyahu dispatches his associates, chief among them Yuval Steinitz, the minister for intelligence affairs, to give interviews against the American administration and, without mincing words, to defy Obama’s policy. For their part, the Americans brief reporters unabashedly against the conduct of Netanyahu’s government.

At the same time, the news about the construction of thousands of residential units in the territories spread like wildfire. Poised to sharply condemn Israel, Europe will surely re-examine the possibility of imposing sanctions on Israel.

For his part, Netanyahu resorts to the nationalist, right-wing rhetoric on which he was raised and which he shunned during his premiership years. There was nobody to talk to and there was nothing to talk about, he said at that Knesset Foreign Affairs and Defense Committee meeting. Now they are talking about Judea and Samaria. Next they will talk about the rights of Bedouins in the Galilee and the Negev. They want Tel Aviv.

When an Israeli premier uses such rhetoric, surely he knows something we don’t. What Netanyahu knows, or estimates, is that his government is starting to slip toward general elections, at which point he will have to storm his electoral base anew. And this base has been significantly chipped by rivals such as Minister of Economy and Trade Naftali Bennett, who is taking over the political right by storm. In the coming elections, Netanyahu might find himself without a clear agenda and without an electoral base, with Bennett closing in on him from the right and Foreign Minister Avigdor Liberman from the left. And we have yet to talk about Moshe Kachlon, the former popular Likud Party minister, who retired due to Netanyahu’s attitude toward him and is forming a new party. Netanyahu is fighting the Americans, but in reality he is fighting for his political future and his status as “leader of the right.” He is fighting for his survival.

Amid this commotion, the old-new image of Avigdor Liberman stands out conspicuously, as described in my previous article. Toward the weekend, he explained once more what he meant by his vision for a regional arrangement. “No more Palestinians first,” Liberman said. “Israel has three key problems in the Middle East: The Arab world, the Palestinians and Arab Israelis. We are willing to and we want to resolve them, but en bloc, in one combined move. There is huge potential in the Middle East. Just think about Israel’s technological and scientific know-how joining forces with the Saudi and Gulf financial powerhouses. But the Arab world must come around and understand that it needs to come out of the closet and start talking to us out in the open. I am talking about full diplomatic and commercial ties. The Palestinian problem could be resolved, as could our problem with Arab Israelis.”

Those waiting for world peace to break out at any moment can relax. All in all, what we are seeing is the realignment of Israel’s political camps. Bennett on the right, Liberman in the center, and Netanyahu? He is trying to jostle his way somewhere between them. At the moment, this quarrel takes place at the expense of the Americans and Europeans. We should hope it won’t come soon at our expense, the Israelis.